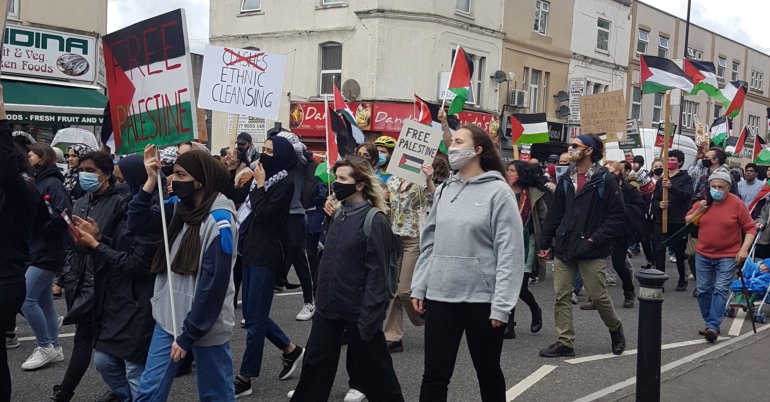 A Palestinian woman has called for more action in solidarity with the struggle against Israeli attacks.

Wafa (not her real name) lives in a refugee camp in the occupied West Bank. She told The Canary:

We thank the solidarity campaigners for the activities and events that have been done to stand by the Palestinian cause, but it is not enough! What’s happening in Gaza, the destruction and killing of people in cold blood needs more and more action.

These attacks have been met by a new Palestinian anti-colonial uprising, and a general strike across historic Palestine.

Palestinian demonstrations in solidarity with the people of Gaza have faced live ammunition. At least 25 people have been killed in the West Bank and East Jerusalem since 10 May.

Do Palestinians have to just wait for another attack before people act in solidarity?

Wafa told The Canary that Palestinians shouldn’t have to wait for another full-scale assault before people acin support of Palestine. She said that international solidarity should be committed and ongoing. According to Wafa:

Even if the [ceasefire holds and the] war ends, what is next? Shall we wait for another war, and for more crimes before we organise again and call for a free Palestine? Or can solidarity movements do more?

Even though there is a fragile ceasefire in place, the Gaza Strip remains under siege by the Israeli state. The siege, which has been in place since 2007, means people in Gaza are not free to travel outside the Strip or to other parts of Palestine. It has a devastating effect on health services in the Strip, and means that people face frequent power cuts and a shortage of clean water.

Ceasefire or no ceasefire, Gaza’s skies are patrolled by armed Israeli drones. The Strip is surrounded by a wall on three sides, complete with a ‘no-man’s land’ where people who enter will be shot. The sea is patrolled by Israeli gunboats that prevent Gaza’s fishing community from going as little as three nautical miles from shore.

And despite the ceasefire, Israel’s attacks are likely to go on as normal. The last major Israeli assault on Gaza was in 2014, but since then – during a period when it’s considered that no full-scale attack was happening – Israel’s day-to-day attacks have reportedly killed at least 450 Palestinians in Gaza.

Can solidarity movements do more?

Wafa told us there was a need to think collectively about creative ways to support Palestine:

It is time to stand up seriously and actively. We need to think together to put forward ways that you can push your politicians to make change.

1. Organizing demonstrations in front of parliaments and in front of the offices of heads of state, and setting up permanent sit-in tents.
2. Announcing a collective hunger strike in solidarity with our people in the Gaza Strip.
4. Writing solidarity messages on social media pages.
5. Boycott Israeli products, musical events, tourism engagement, sporting activities, and other related events organized and sponsored by Israel or happening in Israel.
6. Push your governments to stop Israel’s violation of human rights through petitions, organising protests, organising events etc
7.Organize solidarity campaigns among the student’s union of international universities by raising awareness about the struggle of Palestinians in an apartheid state.
8. You can influence your community, trade union, association, church, social network, student union, city council, cultural centres, or other organizations to end all relations with apartheid Israel and companies that are complicit in its system of oppression.

The people of Palestine deserve more than just momentary rage at the Israeli occupier’s worst excesses. They deserve committed and consistent solidarity from comrades and accomplices in their struggle for freedom. If you’re new to the Palestinian struggle, now is the time to get together with friends and educate yourself. If you’ve already been engaged in some form of solidarity, then now is the time to think seriously about how international solidarity movements can do more.
Tom Anderson is part of the Shoal Collective, a cooperative producing writing for social justice and a world beyond capitalism. Twitter: shoalcollective​
Featured image via Tom Anderson