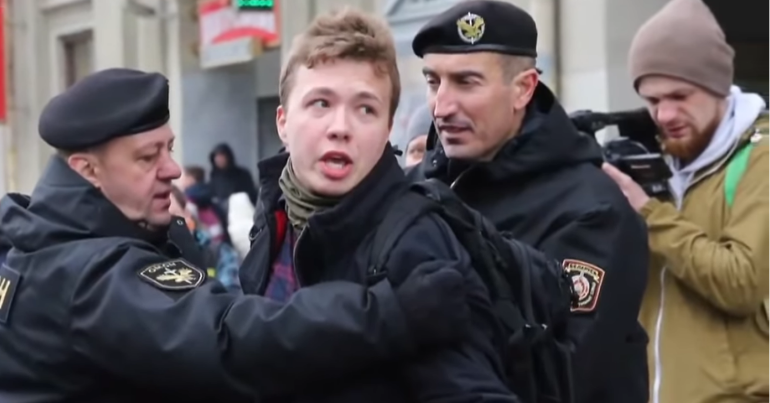 Earlier in May, exiled whistle blower Edward Snowden compared Belarus’s downing of a plane to a US-style “extraordinary rendition“. Once the plane had landed in Minsk, journalist Roman Protasevich was seized and detained, along with his girlfriend Sofia Sapega.

Indeed, the hijacking, undertaken on the orders of the country’s dictator Alexander Lukashenko, should be deplored. However, evidence has emerged suggesting Protasevich’s politics are not all they seem.

Snowden argues that the downing of the Ryanair flight from Greece to Lithuania by the Belarusian authorities is a modern expression of Bush-era “extraordinary rendition”:

Downing aircraft to pursue the arrest of dissidents has always been outrageous. It is the modern expression of Bush-era "extraordinary rendition" (international kidnapping by state agents), and should be opposed no matter the flag under which it occurs.https://t.co/MM2S1Ya2P9

Extraordinary rendition is defined as “The extra-judicial transfer of persons from one jurisdiction or state to another…”. Though perhaps that definition needs expanding to include the capture of someone for political purposes and/or travelling from one third party country to another.

The UK government’s condemnation of the downing of the Ryanair flight is sheer hypocrisy. For the UK is an expert practitioner of rendition.

Indeed, a 2007 European Parliament report stated it had:

serious concern about the 170 stopovers made by CIA-operated aircraft at UK airports, which on many occasions came from or were bound for countries linked with extraordinary rendition circuits and the transfer of detainees

And the Rendition Project published a list of 391 alleged rendition flights via the UK or its overseas territories or Crown Dependencies.

As The Canary previously reported, MI6 also played a pivotal role in the extraordinary rendition of then Libyan opposition leader Abdel Hakim Belhaj. Belhaj was kidnapped by the US and flown to Tripoli. There he was tortured by Libyan intelligence. Several incriminating documents retrieved by Human Rights Watch showed the extent to which MI6 head Mark Allen personally assisted the Libyan authorities in the matter.

The EU can also be accused of hypocrisy in its condemnation of Belarus’s downing of the Ryanair flight.

On 3 July 2013, a private plane carrying Bolivian president Evo Morales from Moscow was refused permission to land in or fly over Portugal, France and Italy. Instead, with reportedly little fuel left, it had to fly on to Vienna. Had the Austrian authorities also refused the plane to land, it’s possible it might have crashed.

So why did this happen? It’s because Snowdon was believed to have been on board the plane. Though as it turns out, Snowden was still in Moscow’s Sheremetyevo airport at the time.

The only reason Snowden did not suffer the same fate that day as the one Protasevich suffered on Sunday is because he happened not to be on the targeted plane that was forced to make an unscheduled landing in Vienna.

In the aftermath of the action by those EU countries, Bolivian ambassador to the UN Sacha Llorenti claimed that Morales had been “kidnapped”:

Bolivia's UN Amb.: "We're talking about the president on an official trip after an official summit being kidnapped" http://t.co/weqLOi1VAP

Llorenti also argued that the ‘blockade’ and subsequent search of the aircraft “violated international law”.

Bolivian defence minister Ruben Saavedra believed the US was behind it all, commenting:

This is a hostile act by the United States state department which has used various European governments.

Hence, the US can also be accused of hypocrisy in its condemnation of Belarus’s actions:

We strongly condemn the Lukashenka regime's brazen and shocking act to divert a commercial flight and arrest a journalist. We demand an international investigation and are coordinating with our partners on next steps. The United States stands with the people of Belarus.

Meanwhile, questions have been raised about Protasevich’s political background.

The Grayzone’s Ben Norton has described Protasevich as a “literal fascist”:

Belarusian regime-change operative Roman Protasevich, who was detained on a plane for trying to overthrow his government in collaboration with Western powers, worked for the propaganda arm of the US-backed neo-Nazi Ukrainian militia the Azov Battalion.

He is a literal fascist https://t.co/Nn4jEQUX9c

Canadian academic Ivan Katchanovski added that according to Ukrainian media, Protasevich “served in the press-service of the neo-Nazi-led Azov battalion”.

The Azov Battalion is reportedly a:

openDemocracy states that the Battalion was

formed by members of two neo-Nazi groups, Patriot of Ukraine and the Social-National Assembly.

At the time, these groups worked as part of Right Sector, the far-right activist group that came together during Maidan and which later also turned into a paramilitary organisation.

Norton has provided extensive research regarding Protasevich’s links to the far-right and the Azov Battalion in particular.

Meanwhile, Julian Assange remains locked up in Belmarsh prison. He’s been there since the UK authorities kidnapped him from the Ecuadorean embassy in London. It’s over three months since the US lodged an appeal against a court ruling that Assange should not be deported.

Against the backdrop of Assange and Snowden, EU, UK and US outrage at Belarus looks farcical. It can only be seen as credible if current proceedings against Assange are dropped and Snowden is pardoned.