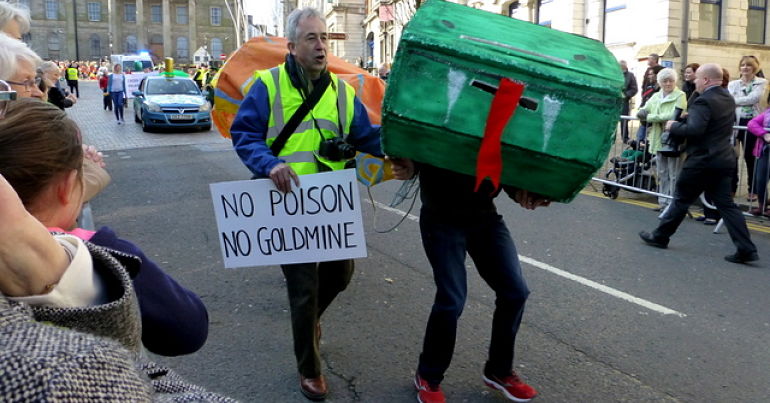 As previously reported by The Canary, people living in the Sperrin mountains in County Tyrone are campaigning against Dalradian Gold Ltd. The company has submitted a planning application for a goldmine.

On 18 June, campaigners will be taking their campaign a step further. Because they’re marching right to the door of government to deliver a very clear message.

Local campaigners will start walking from Greencastle in the Sperrins on 18 June to arrive at Stormont government buildings outside Belfast on 20 June. This is to:

Stand up for the Sperrins and give toxic gold-mining the boot! We are walking from Greencastle to Stormont to remind our ministers and MLAs that over 38,000 people have said a massive NO to Dalradian Gold.

Once at Stormont, they’ll hand in a letter to voice their concerns to local government ministers and MLAs (members of the Northern Ireland Assembly). They hope this will:

draw more attention to the threat that Dalradian proposed goldmine is to this Island and the people who [call] it home.

They also hope it’ll raise awareness about the dangers of goldmining and encourage even more people to write objection letters to Dalradian’s mining application.

Public inquiry and opposition to the mine

Minister for the Department of Infrastructure Chris Hazzard announced a public inquiry into this application. But that was before the Northern Ireland Assembly collapsed in January 2017. The inquiry was then confirmed by current minister Nichola Mallon on 29 June 2020.

However, locals have expressed concerns about this inquiry. And they demand:

Any public inquiry needs to ensure that at its heart there is an equality of arms, and that the local community are afforded the same access and involvement as those who seek to advance this contentious application. As has already been established, there are real and immediate risks to the environment and to the local community’s human rights, which must be taken into consideration

They’re still fighting to ensure there’s “full and meaningful engagement with the public inquiry”. And opposition to the proposed mine is growing. Because at the time of writing, there were over 37,400 objections to the goldmine application.

Local people have highlighted a number of incidents in the area. They claim this represents harassment by Dalradian. One such incident includes:

The Canary contacted Dalradian for a response, but it didn’t respond by the time of publication.

The other incident involves the arrest of a local man following an incident near the proposed goldmine site. A PSNI spokesperson told The Canary :

A 47 year old man was arrested following an incident which occurred at the Crocknaboy Road area of Omagh on Thursday 22nd April. The man was released on police bail pending further enquiries.

Local people oppose the goldmine application on community, health, and environmental grounds. Some campaigners have been opposed to proposals for a goldmine since 2015. Dalradian applied for a mining licence in 2017.

Dalradian predicts its mine would last over 20 years and produce 130,000 ounces of gold per year. However, locals told The Canary they questioned Dalradian’s job creation predictions. Dalradian claims this project will create 1,000 direct and indirect jobs.

This application is still live despite the Northern Ireland Assembly declaring a climate emergency in February 2020. On 13 October, the Assembly took another pro-environment step by agreeing to place a “moratorium on onshore petroleum licensing and drilling”. Local campaigners in the Sperrins will be hoping for something similar to protect their community.