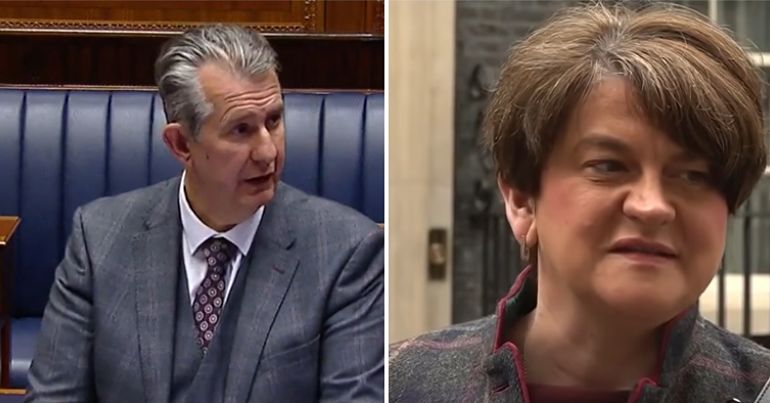 On 28 May, the Democratic Unionist Party (DUP) ratified Edwin Poots as its first elected leader in its 50-year history. And to say this democratic process has got off to a rough start doesn’t quite capture it.

Since the party dipped its toe in these new waters: a DUP executive member has resigned; it’s rumoured that some councillors could follow; senior figures walked out of the Poots’ acceptance speech; and there’s even been an allegation of terrorist intimidation in the electoral process:

Reports that the UDA used threats & intimidation to influence the DUP leadership contest, if true, are deeply disturbing.

The @ChiefConPSNI needs to investigate these reports & establish exactly what happened & the DUP has a responsibility to co-operate with that investigation. https://t.co/SjWJkj5GNV

If you’re finding this all just a bit too much to take in, that’s understandable. Because despite a poor election result in 2017, the DUP still held on to be the largest party in the Northern Ireland Assembly. And as recently as September 2019, it was propping up the UK government while trying to dictate on Brexit.

But since then, it’s all gone pear-shaped. In December 2019, the DUP lost two of its Westminster MPs. This means the north of Ireland has more Irish republican MPs than unionist. Since January, the Brexit that the party so deviously campaigned for came back to bite it.

And on 22 May, a poll predicted that Sinn Féin, the DUP’s partner in government but also its arch rival, could become the largest party in the Assembly following elections in 2022.

The DUP is in absolute turmoil, which is even taking a toll on its social media presence. Because when former leader Arlene Foster abandoned her @DUPLeader twitter handle, she took over 96,000 followers with her.

And her former handle, which now has over 3,700 followers, was quickly taken over by a parody account. That account didn’t waste any time:

This is a thankless job. After all we've done by pushing for Brexit, voting down the backstop and @BorisJohnson creating an Irish sea border, we've done more for a United Ireland than @sinnfeinireland has done for years. They didn't even buy me a pint. Rant over.

Sticking “the Poots in”

Poots’ knife edge victory of 19 votes to 17, over his rival Jeffrey Donaldson, set a divisive stage. Because now they’re at each other’s throats. One insider is predicting a very bleak future indeed for the DUP:

#DupLeadership…a DUP insider who was witnessing what was happening during last night’s ratification of the leadership of Edwin Poots predicted DUP will lose 10 seats in next election.@vincekearney @rtenews

This cartoonist took a satirical approach:

A recent one. That time I did a rare political gag #dupleadership #cartoon pic.twitter.com/rj0TBRhDoK

Try as the DUP might to display a united front, that may not last. This current split could have its roots in a previous one – namely the one in 2008 that ousted DUP co-founder Ian Paisley senior as leader. Because his son, Ian Paisley junior, who backed Edwin Poots, recalled how that ousting affected his father:

"It killed my father," Ian Paisley says he knows exactly how brutal the changing of leadership within the DUP can be… pic.twitter.com/Rq7zT5Lc7f

Time will tell what happens to the DUP. As things stand, it probably won’t face another electoral test until May 2022. But as Poots has already declared war on Brexit’s Northern Ireland Protocol, a test of that leadership could come much sooner. This is far from over.