40 years on, Greenham Women's Peace Camp continues to inspire the fight against the arms trade - The Canary 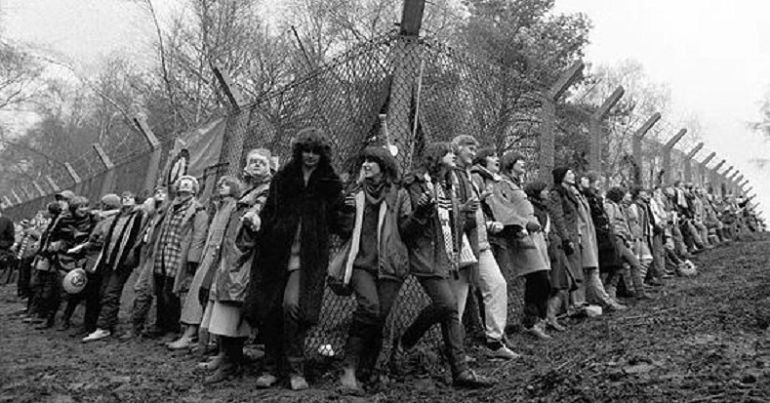 On 5 September 1981, a group of Welsh residents arrived at RAF base Greenham Common in Berkshire. They’d left their homes in Wales to challenge “the decision to site 96 Cruise nuclear missiles” at the base. They later gained international recognition as the ‘Greenham Common Women’s Peace Camp’. It was the biggest woman-led protest since the suffragettes and attracted around 70,000 women at its height.

On 4-5 September, a series of commemorative events honour the women involved in that camp and their achievements. They remind us that 40 years on, the struggle against nuclear weapons and the international arms trade must continue.

This woman-led protest movement started against the backdrop of the arms race between the USA and USSR. These women were committed to a non-violent form of protest. And despite the testing conditions of living on a protest camp, women came from all over the UK and abroad to give their support.

As the camp founders’ request for a debate was ignored, they set up the protest camp on the perimeters of Greenham Common base. Campaigners claim the unique approach to protest made the campaign against cruise missiles “a national and international political issue throughout the 80s and early 90s”.

Achievements at the camp

The campaign was effective. Because it disrupted the American air force’s exercises by blocking nuclear convoys leaving the base and upset them again by blocking the convoys at their practice area. The campaigners also claimed their actions were “instrumental in the decision to remove” the missiles from the base. That’s because a nuclear arms treaty signed by the USA and the USSR agreed their position, saying it was:

Conscious that nuclear weapons would have devastating consequences for all mankind

Additionally, the camp founders took a number of initiatives in court that tested the legal status of nuclear weapons. In 1992 the lord chief justice, referring to a case the campaigners won, said:

it would be difficult to suggest a group whose cause and lifestyle were less likely to excite the sympathies and approval of five elderly judges. Yet it was five Law Lords who allowed the Appeal and held that the Minister had exceeded his powers in framing the byelaws so as to prevent access to common land

The last missiles left the base in 1991 and the camp closed in 2000. This was after campaigners erected a memorial at the peace camp.

The struggle goes on

As reported by The Canary, HM Naval Base Clyde, known as Faslane, is the Royal Navy’s main base in Scotland. It’s home to the UK’s Trident “nuclear deterrent” and the Royal Navy’s most powerful and advanced submarines. Protesters started their anti-nuclear peace camp there one year after Greenham Common. And it’s still going today.

But the peace campaigns and anti-weapons campaigns of today aren’t confined to nuclear weapons. They also focus on tackling the lucrative arms trade that has caused and continues to cause untold damage across the planet. So the camp founders’ message of peace is every bit as relevant today as it was 40 years ago.