An independent Scotland should also be nuclear-free - Canary 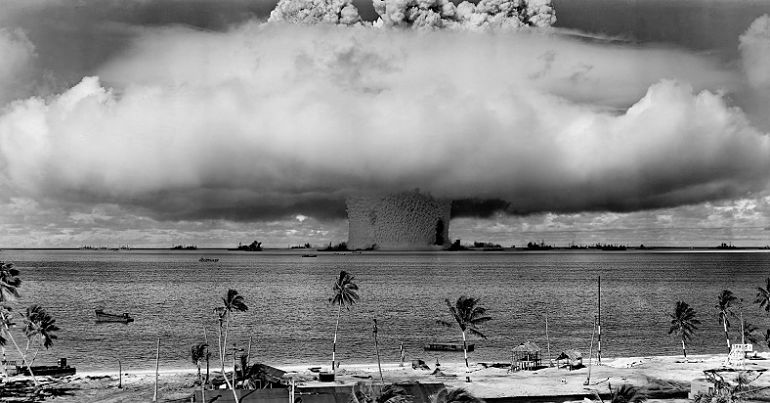 HM Naval Base Clyde, known as Faslane, is the Royal Navy’s main base in Scotland and home to the UK’s Trident “nuclear deterrent”. It also houses a “new generation of hunter-killer submarines”, which are the Royal Navy’s most powerful and advanced submarines ever.  According to the perverse logic of doomsday weaponry supporters, Trident ensures peace. This is based on a sort of ‘reassuring’ belief that nobody would dare attack the UK for fear the UK would retaliate with a nuclear strike.

Protesters have had an anti-nuclear peace camp outside Faslane for almost 40 years. They more realistically describe Trident as being:

ready and willing to blast even the last remains of the realm of the living beyond survival instead of noticing that killing for peace is like – pardon the language – copulating for virginity.

On Saturday 28 August, some members of the Scottish independence movement are holding an anti-nuclear rally at Faslane:

RALLY FOR INDEPENDENCE- FASLANE
FOR A NUCLEAR FREE SCOTLAND 🏴󠁧󠁢󠁳󠁣󠁴󠁿

1/ The siting of Trident nuclear weapons at Faslane is a democratic outrage. Their placement doesn't have the support of the Scottish Govt or the Scottish people. pic.twitter.com/dVaB1EVGIi

The dangers of nuclear weapons

An explainer video by filmmaker Phantom Power succinctly outlines the dangers and cost of nuclear weapons:

Archive footage in the video explains that:

A one-mega-tonne bomb exploded 7,000 feet above the House of Commons would create a fireball over a mile across. Houses would simply explode; people would disappear.

The video goes on to say that Faslane houses eight nuclear-powered submarines, with “4 more due to arrive”. It claims there have been “over 500 ‘significant’ health and safety incidents since 2006” at the naval base. One such incident involved a near miss between a ferry and a nuclear submarine. Lorries transporting nuclear materials to and from the base, pass through populated areas once every two months. And since the year 2000, there have been 180 safety incidents on these convoys.

The video also claims that the nuclear bombs carried on a number of Faslane’s submarines could, if detonated, be as detrimental as “800 Hiroshimas”.

In 2016, the UK government decided to “renew our nuclear deterrent”. This renewal is reported to cost £205bn. According to Phantom Power’s video, this would be enough to fund two NHS budgets or “100 years of free public transport”.

Today’s protest takes place shortly after the 40th anniversary of the start of a women’s anti-nuclear camp at Greenham Common. This movement of women opposed the storing of US nuclear warheads at an RAF base. And at its height, the movement:

gathered more than 70,000 women for direct action and became the biggest female-led protest since women’s suffrage

🗣️40 years ago a group of ordinary women drove nuclear weapons out of UK.

They left their homes in Wales to oppose the arrival of US nuclear warheads at RAF Greenham Common. Their actions that day would lead to one of the largest female-led protest in the 🌏(1/5).#nuclearban pic.twitter.com/EXJqQ6O6AM

That was just one year before the peace camp at Faslane started. Today, a diverse range of people and independence groups are taking part in the anti-nuclear protest:

Parked up outside Faslane Peace Camp opposite the navy submarine base in preparation for the #AUOB event later today, where we will be raising banner for the worlds greatest anti war hero #JulianAssange 1/2 pic.twitter.com/K7kjcsjVxM

I have been asked to speak at the Faslane AUOB Rally (not a march) on Saturday 28th August from 1pm. pic.twitter.com/9hLoqTZeDj

Details for those attending the AUOB Faslane Rally. See you all Saturday ✊🏻🏴󠁧󠁢󠁳󠁣󠁴󠁿#NowScotlandNow#AUOBFaslane#IndependenceIsNormal https://t.co/TfyySQVVr7

Time for an independent and nuclear-free Scotland

As the campaign for Scottish independence appears to be gaining momentum, the movement is outlining its nuclear-free vision. All Under One Banner says:

These weapons of mass destruction play no useful roll and they put all of us at risk. They only exist as a means of providing the UK Govt with a seat at the table with other imperialist powers who seek to dominate, both politically & economically, the world by military power.

There are already 197 countries who don’t have nuclear weapons, and there’s every reason for an independent Scotland to join them.