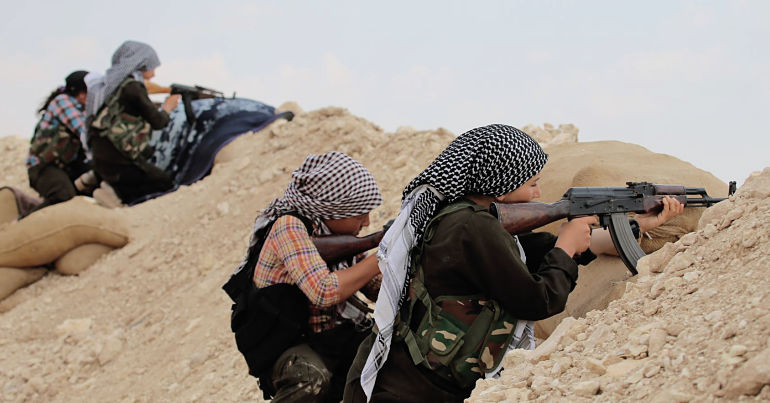 Following misogynistic Donald Trump’s 2020 sell-out deal with the equally misogynistic Taliban, the big powers have helped restore fundamentalist rule in Afghanistan. That deal included a guarantee by the Taliban to ensure that no group or individual violates the security of the US or its allies within Afghanistan. However, the bombing at Kabul airport by IS-Khorasan (IS-K), which tragically saw at least 169 Afghans killed and many more wounded, put an end to that provision. It was the latest humiliation for the retreating US and its allies.

But Afghan women revolutionaries have come out fighting. And they’re calling for international solidarity and resistance against the Taliban and IS-K. And their Kurdish sisters, with their vast experience of combatting Daesh (ISIS/ISIL) and its Turkish backers, have issued a similar call.

In a statement issued on 20 August, the Revolutionary Association of the Women of Afghanistan (RAWA) – first founded in 1977 – declared that:

Women will not be shackled any more! Just the next morning after the Taliban entered the capital, a group of our young brave women painted graffiti on the walls of Kabul with the slogan: Down with Taliban! Our women are now politically conscious and no longer want to live under the Burqa, something they easily did 20 years ago. We will continue our struggles while finding smart ways to stay safe.

Just as we as YPJ have resisted IS and the Turkish occupiers and their gangs with the organized force of women, strengthened and increased our army, Afghan women too can become a force for freedom with their strength and organization.

On 16 August Komalên Jinên Kurdistan (KJK) – a confederation of women’s organisations – issued a statement of solidarity with the women of Afghanistan. Referring to Turkey’s war on the Kurds, the KJK commented on how the US and its allies simply cannot be trusted:

This was proven yet again when US forces shot civilians dead following the Kabul airport bomb blast.

KJK’s statement also referred to the Turkish invasion of the largely Kurdish-populated Afrin:

Just as in Afrin, where the YPJ, which inspires women from all over the world, was founded, and where today women are subjugated and murdered as a result of the policies of the global hegemonic powers, also the women in Afghanistan face the same threat now.

We call upon all women, especially upon the women in the Middle East, to stand in solidarity with our sisters in Afghanistan, to raise their voices, and to defend their lives, achievements and dreams.

The continuation of US attacks and the increase in the number of innocent civilian victims not only gives an excuse to the Taliban, but also will cause the empowerment of the fundamentalist forces in the region and even in the world.

Tragically, twenty years on, that prediction has proven correct.

Moreover, in March this year, RAWA made it clear what exactly would happen as a consequence of the 2020 Trump-Taliban deal. It declared:

Today, it is up to our people, especially our women, to stand against the treason of the US through a nationwide uprising to fight Pakistani mercenaries, both Taliban and ISIS.

RAWA also referred to how their Kurdish sisters in Kobane (Rojava) “rubbed the snouts of ISIS to the ground”. Referring to the financing and arming of the Taliban from Pakistan, RAWA added:

If we rise without fear, with determination and resilience, we can drive the ISI-created Taliban to their Pakistani godfathers’ bosom.

RAWA further declared that it is women who must now “lead the resistance against the Taliban and co”.

Earlier in August, one commentator tweeted how Afghanistan needs armed resistance via the equivalent of the YPG (Kurdish People’s Protection Units) and YPJ and the largely Kurdish Syrian Democratic Forces:

#Afghanistan needs a YPG & YPJ and the equivalent of the Syrian Democratic Forces to fight the Taliban.#SanctionPakistan pic.twitter.com/WrbnCsqj2L

It was the YPG/YPJ and their allies who defeated Daesh in its de facto Syrian capital of Raqqa. But Joe Biden, then US vice-president, warned Kurdish militias to back off from their advances. Biden said they “should not spread west of the Euphrates… if they do they will never receive US support again”.

Biden’s threat was all about backing NATO member Turkey, which seized Kurdish-populated territory in the north of Syria. Turkey is now bombing hospitals in Rojava and the mainly Yazidi-populated Sinjar province. As for Turkey’s authoritarian president Recep Tayyip Erdoğan, he claims the Taliban’s recent statements are “moderate”.

Meanwhile, the link between Kurdish women and Afghan women’s struggles for freedom was further emphasised:

When women rise up no force can withstand the storm. Solidarity with the struggles of women in #Afghanistan and may their struggles prove fruitful against all forms of fascist, patriarchal and conservative elements. #AfghanistanCrisis pic.twitter.com/l1W4rjLXwt

In a September 2019 interview, activist Samia Walid also referred to the link between the Kurdish struggle against Daesh and that of Afghan women:

The struggle and sacrifices of the lionesses of Kurdistan have been an inspiration and source of strength for us. Their struggle against ISIS and other medieval-aged criminals have given us huge lessons.

RAWA believes international solidarity with independence-seeking, freedom-fighting, democratic and progressive organizations and parties as a vital part of our internal struggle. Our struggle converges with the Kurdish people’s struggle as most of our enemies are similar in nature.

publishing our magazines and articles, and mobilizing women to get this consciousness and join our struggle. We collect and document the killings, raping, pillage, extortion, and other crimes of these warlords in remote parts of Afghanistan. Our social activities are providing education to women (not just literacy classes but social and political awareness as to their rights and how to achieve them), emergency aid, making orphanages, and health-related activities.

More recently, RAWA published 29 prohibitions that the Taliban could impose upon women in Afghanistan. These range from prohibition of female work outside the home to prohibition of women from studying at school or university or other educational institutions.

Moreover, the Taliban has organised an Orwellian ‘Ministry for the Propagation of Virtue and the Prevention of Vice’, which is:

responsible for controlling the little details of people’s daily lives like the length of the beard, the dress code and having a Mahram (male companion, only father, brother or husband) for a woman.

RAWA is now calling for a “democratic front” to rise up and resist the Taliban:

Today, as we call for the establishment of a democratic front against the Taliban, we call upon all democratic, secular, anti-fundamentalist and anti-occupation forces, all our tormented women, girls and men, to say that nothing will come out of mourning. Let us rise and resist against the Taliban and their partners, in any way and at any level, and give them a taste of defeat and sorrow.

The US and its allies have abandoned Afghan civilians to the mercy of the Taliban. Consequently, resistance within the country will, of necessity, be strictly underground.

And the women revolutionaries of Afghanistan will need all the support they can get.