ME: the year in review - sickness, lies, and subversion - Canary 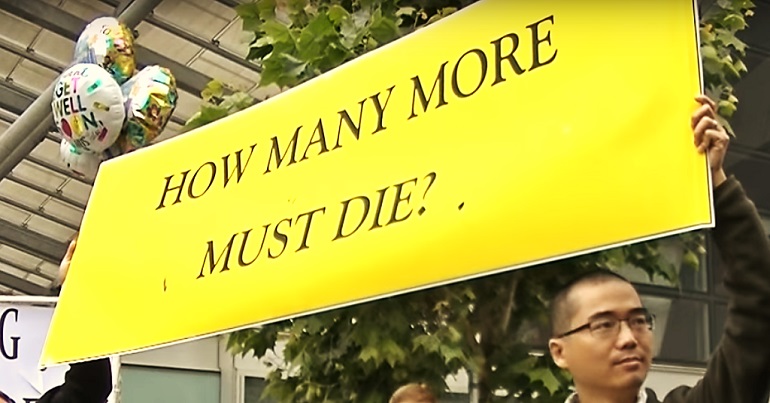 Myalgic encephalomyelitis (ME) is a disease that has repeatedly hit the headlines in 2021. Sadly, this has often not been for the right reasons. Patients and their advocates fought the system and parts of the medical establishment – as well as their own bodies. But within this are stories of hope and resilience against all the odds.

People with ME: a traumatic year

For people living with ME, their advocates, families, and supporters, 2021 has been traumatic, at best. On a basic level, you have a debilitating and poorly-treated neuroimmune disease that affects every aspect of the patient and their loved one’s lives. For many, the worst part is a worsening of symptoms brought on by physical activities, mental activities, or both. This is called post-exertional malaise (PEM). In layman’s terms, every time a person living with ME does any form of exertion, they get even sicker. It’s one of the cruellest parts of the disease, because tasks most people thinks of as ‘normal’ – like washing up – can make a person with ME really ill.

Light amid the perpetual dark

Still, each person living with ME also has moments of light amid the often perpetual dark; however fleeting they may be. I asked the ME community on social media to tell me some of theirs. I had an overwhelming response, which was lovely. You can read all of people’s thoughts here. For example, Sibylle said:

Also, some people shared positive thoughts on ME as a whole. Tracey said:

But this year has also seen parts of the medical establishment pile an additional raft of stress, upset, and trauma on to people who really don’t need or deserve it. The situation with the National Institute for Health and Care Excellence (NICE) has been central to this. My, what a tangled web some people have weaved. It’s a complex story that you can read about here. To sum up, NICE’s new guidelines removed harmful treatments for ME such as graded exercise therapy (GET). For some reason, NICE delayed their publication, causing many people great distress. This is because patients had been saying for years some treatments were harmful, but previously no one listened.

We now know thanks to Freedom of Information (FOI) requests that some medical professionals from big organisations like Royal Colleges had been trying to subvert and corrupt NICE’s processes to keep the harmful treatments in place. This is because there’s a cartel of doctors who believe ME is psychosomatic. They’re quite happy to see people’s mental health be blamed for their physical illness. Thankfully, common sense and scientific rigour prevailed, and NICE published the guidelines as they were. The situation shone a telling light into what goes on behind closed doors in parts of the medical establishment.

The pandemic has also thrown long Covid into the mix. Strikingly similar to ME in many respects, it has for many come as some sort of surprise. There was shock! Shock, I tell you, that some people who caught a virus didn’t get better and were left chronically ill afterwards. Of course, if doctors had listened to ME patients and not certain sections of their own professions, the world would have been better prepared for long Covid and the lasting impact it will have on millions of people.

Many people, including myself, did say this would happen before the UK first locked down. Since then, there has been welcome research into long Covid which could have an impact on ME. But among patients, there’s been an undeniable sense of disquiet and upset. For years, people with ME have been disbelieved, stigmatised, given incorrect treatment, or told it’s ‘all in their heads’. So it takes a global pandemic for people to start caring? Better late than never I guess, but it’s a bitter pill to swallow for many.

What shone through in 2021 is the continued fight ME patients and their loved ones have put up against those that would see them forgotten about or mistreated. Sally Callow, who runs the social enterprise ME Foggy Dog, is one such example. She has been a relentless force for change in the community despite living with ME herself. Her campaign for a harms reporting mechanism (including a petition) is vital. So please read more here and get involved.

People with ME on social media shared my sentiments. You can read everyone’s comments here. Katy said: 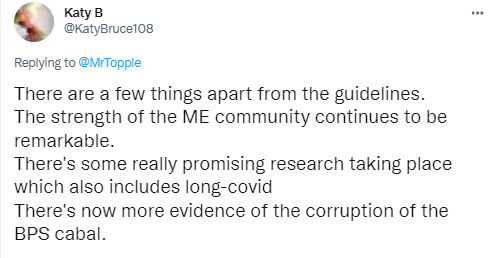 Then, there is the Chronic Collaboration – an activist and advocacy organisation founded by my partner and person with ME Nicola Jeffery. It was her idea, and the result was what I consider to be a groundbreaking protest outside NICE HQ and a number five Twitter trend. People with ME are usually too ill to protest, or the groups representing them tend to avoid it. So, to have an in-person protest alongside an online one was quite unique. And I hope we represented the community as well as we could.

So, what will 2022 hold for people with ME? It’s difficult to say. I’m personally not confident that harmful treatments like GET will be scrapped by the medical profession despite NICE’s new guidelines. Moreover, the story of ME is an infinitely complex and multi-layered one. I tend to write about it a fair bit. But even I haven’t explored many aspects of this story nor its full history, or how it all intersects with the agendas of corporations, the government, and certain medical professionals.

In the meantime, I would like to wish everyone living with ME, their families, loved ones, advocates, and supporters a peaceful New Year. And should you so chose, you could catch up on the many of the other review articles here. The holiday season is never easy and often not pleasant for chronically ill and disabled people, so wherever you are, and whatever you’re doing, I hope you find some comfort and respite. Please know that me, and The Canary, have your backs. And we’ll continue fighting for justice and a resolution for all of you in 2022.