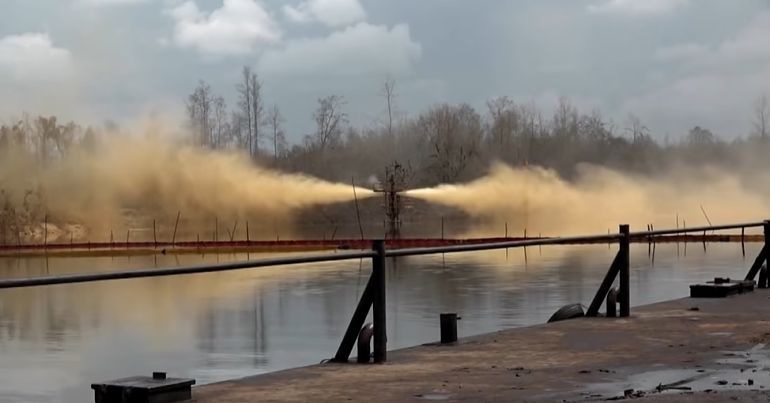 The fossil fuel industry says it wants to be part of the solution to the climate crisis. Despite this, it’s busy trying to ensure it can exploit new parts of the Earth for more fossil fuels, with the staunch backing of governments.

An image from a recent disaster in Nigeria shows what a dangerous path that would be to follow, especially for a world in the grips of two existential crises: climate and biodiversity.

As the Health of Mother Earth Foundation (HOMEF) detailed in a report, an oil well blowout occurred on 1 November. It explained that:

A blowout occurs whenever there is the release of uncontrollable oil and gas from an oil well or gas well after all pressure control systems fail.

The November blowout happened at a well in an oilfield operated by Aiteo Eastern Exploration and Exploration Company in Bayelsa state. The spill wasn’t “top killed“, meaning plugged, until 8 December. HOMEF’s director Nnimmo Bassey posted an image on Twitter on 22 December that showed what those weeks of constantly spurting crude oil and fossil gas has done to the environment where the well is situated:

As Bassey’s tweet highlighted, an investigation into the cause of the blowout is now underway.

The HOMEF report said that such spills can ‘largely destroy’ the socio-economic wellbeing of people, who mainly rely on fishing and small-scale farming, where they occur. It continued, noting that spills can have:

direct impacts on human health due to the heavy metals in the oil. Elements such as lead, cadmium, arsenic and mercury pose special health impacts, causing cancers, kidney failures, reproductive problems, birth defects and many others.

The report also asserted that the Aiteo spill has destroyed “immense tracts” of the Santa Barbara river’s mangrove forests, with their “heavily crude oil-soiled” roots exposed at low tide. It suggested that the mangrove swamps would likely have a “heavy presence of the polluting crude oil”, which would mean “that aquatic lives like periwinkle, crayfish, crabs, oysters and even fish would be wiped out”.

HOMEF further noted that despite the company deploying booms that are meant to stem the spread of the oil, a “large volume of the crude oil was flowing out to the Santa Barbara River and spreading towards the Ocean”.

Nigeria is, of course, no stranger to such disasters after six decades of exploitation for hydrocarbons. Neither are other countries where fossil fuel companies have operated. Attorney Steven Donziger, who is well known for his legal battle with oil giant Chevron, tweeted:

Now that I'm out of prison, let's not forget @Chevron's 1,000 toxic waste pits abandoned in Ecuador's Amazon. Indigenous peoples are dying from this horrific environmental crime that has lasted 50 years.

The solution is simple: clean it up. pic.twitter.com/N0zl277bC9

But their ongoing experience should serve as an alarm bell for governments elsewhere that are currently being seduced by the fossil fuel industry’s charms.

As HOMEF said, some blowouts are near impossible to control, due to the level of force involved or where they happen. Imagine then, if such a disaster were to occur in Namibia and Botswana, where ReconAfrica is engaged in exploring for oil? As The Canary has previously reported, its project could impact a watershed called the Okavango Delta. Those waters support the lives of tens of thousands of people, unfathomable numbers of wild animals, and huge amounts of vegetation.

Bassey previously wrote that the ReconAfrica project is a “gamble” that risks turning the Okavango region “into an arena of death”. The image he posted on Twitter illustrates with sobering clarity exactly what that ‘death’ looks like.

Destruction, every step of the way

As legal action currently underway in South Africa shows, fossil fuel projects aren’t solely risky to people and the environment once they’re operational. A number of environmental groups and communities in the country are currently fighting to halt the seismic testing Shell is conducting along the Wild Coast. They argue, backed by scientific expertise, that the testing poses risks to sea life and people.

Companies conduct seismic surveys to assess what oil and gas may lie under the ocean floor. In Shell’s case, it involves blasting the ocean with sound pulses on a regular basis over a period of months. The recorded feedback from those blasts will indicate the presence of fossil fuels or not.

Groups have mounted two legal challenges against the testing. Natural Justice and other environmental and human rights-focused groups filed an urgent interdict application at the end of November. A judge heard that case on 1 December. He ruled against the applicants on 3 December, on the grounds that they hadn’t proven that the survey would do “irreparable harm” to marine life. The groups have applied to appeal the judgment.

Wild Coast community members and groups filed a further urgent interdict in early December. A judge heard that case on 17 December. The judgment is currently pending.

The cases have variably accused Shell of moving forward with the surveys without the correct environmental authorisations and failing to meaningfully consult with affected communities. They have also asserted that the surveys threaten harm, including harm that could be irreparable and substantial, to communities and wildlife.

In the case of the latter issue, Shell has argued that it has mitigation measures in place to minimise harm to ocean life. However, expert opinion presented in the second case characterised these measures as inadequate on a number of levels. Current scientific evidence shows that seismic surveys widely and negatively impact ocean ecosystems, from tiny organisms like zooplankton to large mammals such as whales.

Moreover, Shell is ultimately carrying out these surveys in the hope it can drill the Wild Coast for fossil fuels. During a Daily Maverick webinar on the situation, conservation strategist at the South African Association for Marine Biological Research, Judy Mann-Lang, explained the risks of this. She highlighted that the Wild Coast hosts an extremely powerful current called the Agulhas Current. Mann-Lang warned:

Our concern is that if oil or gas is found there, how are they going to extract it safely, given the incredible powerful current washing down that coast? How are they going to mitigate the risks of this current? What happens if something goes wrong? They don’t know. Predicting this current is difficult. It is not called the Wild Coast for nothing.

In a world already grappling with immense environmental crises, it is beyond comprehension that authorities would wilfully put further vital ecosystems – and all the living beings who depend on them – at risk in pursuit of more planet-burning fossil fuels. Shell, however, doesn’t appear to see things that way. During the first court hearing, its counsel argued [1:56.15] that “in matters like this”, namely “where there are allegations about harm to the environment”, there’s a “subtext” that:

the commercial interests of private companies, and this is frankly especially companies with a big international footprint like Shell, must just yield to the supposed environmental interests or the interests of the public

So if we’re to have a hope in hell of turning the tide, life simply must take priority over money and profit.