The military: the year in review - war crimes, withdrawals and secrecy - Canary 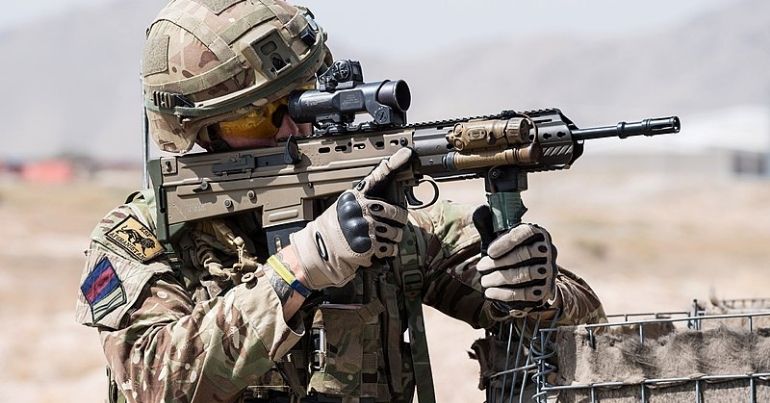 2021 was a year of decline and reorganisation for the British military. It was also a year when historical war crimes allegations resurfaced, secrecy was expanded and a major defeat became undeniable. We decided to look back over some of the key themes in military affairs which emerged over the year.

This article is another in The Year In Review series. You’ll be able to catch up on the many of the other review articles here.

The Afghanistan occupation finally ground to an end as the Taliban took Kabul in August. Bringing to an end 20 years of military occupation. While generals maintained the military had never been defeated, the rapid and messy withdrawal told another story. The narrative around the chaos of the pull-out was being revised even as it happened. Mainstream media focus was on ‘human interest’ – namely via images of soldiers carrying children and a bizarre story about an evacuation of dogs.

The defeat caused major dissonance, with the guilty nations arguing about who was to blame for failure. And one Tory MP even arguing that Afghanistan should be reinvaded. The government was less keen, however, on a proper inquiry into the disaster.

Yet the real face of British military operations did peek through. Allegations of war crimes in Afghanistan, this time by SAS troops, re-surfaced again. The allegations included that in 2011 special forces troops murdered 17 people over a two day period during house raids in Afghanistan. And that key documents relating to the cases were kept hidden by the military. One senior officer was quoted as saying of the alleged killings:

I find it depressing it has come to this. Ultimately a massive failure of leadership.

And Britain’s violent history in Ireland also reared its head. Former soldier Dennis Hutchings died while on trial for the Troubles-era killing of John Pat Cunningham, a disabled man from Country Tyrone. At the last minute, the military u-turned under pressure from veterans groups and former Tory minister Johnny Mercer on Hutchings’s funeral. They allowed him to be buried with military honours on Remembrance Day.

And it looks as if the British establishment is attempting to rewrite the British military’s record in Ireland. In November, a Tory MP announced that the Ireland occupation would also be given an official history. The aim: to provide an official version of the conflict which favoured the British.

2021 also saw military secrecy deepened. Parts of the military were reorganised into new ‘Ranger’ regiments in November. Meaning that over 1,000 troops will now be protected from Freedom of Information requests and parliamentary questions. The Canary was ahead of the game on this, first warning of the threat to accountability in March 2021.

Military chief general Nick Carter tastefully chose Remembrance to announce that the UK needed an army of killer robots. Clearly, another step away from accountability and towards less accountable military operations. And November also saw a new head of the military, admiral Tony Radakin, lay out his dystopian vision of future warfare. Central to his strategy: more deployments and deeper integration between the military and arms firms.

Another major story in 2021 was the Overseas Operations Bill. The Bill aimed to stop investigations into alleged crimes by UK troops. As The Canary reported critics included everyone from the Quakers to the Royal British Legion.

While top military lawyer Hilary Meredith warned that, far from protecting troops, the bill would strip personnel of their ability to hold the MOD to account:

It is totally unacceptable for the Government to legislate to deny those who put their lives on the line for our country overseas the same employer liability rights as the UK civilians they defend. The section must be scrapped – it clearly breaches the Armed Forces Covenant.

However, due to the large Tory majority the bill passed despite substantial criticism from outside parliament in April 2021.

However, the military and warmongers didn’t get it all their own way. A special statue of a soldier went up in Margate to highlight the disaster of British foreign policy. The Tories were roundly mocked for trying to hide, well, everything behind the Union Jack. And over the pond, ex-US president George W Bush found one of his public events had been penetrated by an angry Iraq war veteran who demanded he account for his crimes.

In 2022, the fight against war and militarism will continue. And The Canary will be there to report on it.