Mastodon may be the future - and independent media is now there 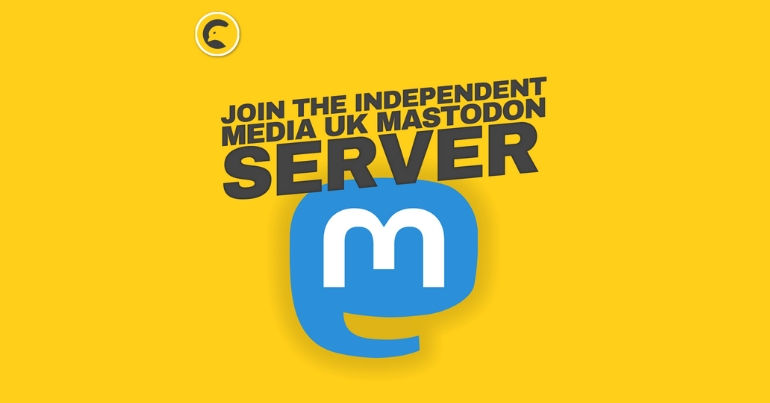 The Canary has never been an organisation to sit quietly on the sidelines. So, with Twitter’s freefall into chaos, the team has decided to take the initiative and look elsewhere. The first thing we’ve done is launch an independent media server on Mastodon, a decentralised social platform. There’ll be other left-wing media outlets on it too – with some familiar faces already there. And of course, you’re all invited to join it too.

If you’ve missed it, Twitter is a bit of a mess. Well – it’s more of a mess than usual. As the Canary‘s Curtis Daly wrote:

Free speech has been saved! Elon Musk has bought Twitter for a measly $44 billion. He is now our new corporate overlord.

Aside from the ‘paying for a blue tick‘ saga, Daly noted:

Musk has begun to lay off workers at Twitter, with the staff number reduced to around 7,500

A lot of people aren’t happy with this – and Mastodon has already become the go-to replacement.

The social media site has already tweeted that one million people have joined it since Musk’s Twitter takeover:

Over 1 million people have joined Mastodon since October 27. Between that and those who returned to their old accounts, the number of active users has risen to over 1.6 million today, which, for context, is over 3 times what it was just about two weeks ago!

As Digital Trends wrote, Mastodon was launched in 2016:

by developer Eugen Rochko. And while it does share similarities with Twitter, it was designed out of frustration with Twitter’s shortcomings. Many of Mastodon’s key features could be seen as efforts to correct (or avoid) certain issues Rochko felt Twitter struggled with.

It also went on to say:

Mastodon calls itself “decentralized social media.” But what does that mean? Essentially, it means that Mastodon is not owned by one company as Twitter is. Mastodon is instead a social media platform that is made up of independently-run servers (known as “instances”), the members of which can still communicate with members of different instances.

When you first sign up for Mastodon, you’re expected to join one of these instances. Creating a Mastodon account only happens from within them. Once you pick one to join, that’s when you’ll be presented with the application/account creation process. Each instance has its own set of rules and many of them are focused on specific interests.

So, Mastodon appears to be free from corporate control – currently. It’s not as quick as Twitter, granted, and looks quite basic. However, it’s also not as restricted. It appears it’s up to individual servers to moderate content. But Rochko doesn’t look like he’s messing about, either:

Mastodon may not replace Twitter, but at least it has better leadership.

The Canary knows that quite a few people from our Twitter community have already joined Mastodon to complement Twitter, not to move away from it. So, we’ve decided to join in with our own server. You can join it here: https://independent-media.co.uk/

Now, if you’re already on Mastodon using a different server but want to join ours, Screen Rant has helpfully explained how to do that:

First, start by signing up for an account on the selected server. Once the new profile is created, sign in to the new server’s profile from a web browser. Select ‘Preferences’ from Mastodon’s homepage and open the ‘Account’ tab. Scroll to the ‘Moving from a different account’ option and click on ‘create an account alias,’ where Mastodon will prompt the user to type in the old account’s handle. This step does not do anything until the old account initiates the next step. When the aliases are created, sign in to the old account and navigate to the ‘Account’ tab. Now scroll to ‘Move to a different account’ and select ‘configure it here’ to begin the migration steps. Input the new account’s handle and the old account’s password, then hit the blue button that says ‘Move Followers.’ There is also a way to redirect the account without moving the followers by selecting the ‘Only put up a redirect on your profile’ link. Users should read the fine print for each option before making any decisions regarding redirection or moving servers.

We’re also proud to say other independent media outlets have already joined the server. Unity News, Evolve Politics, and Milk The Cow Podcast have all got on board – with more outlets to follow – and we only launched on 16 November. So, you’ll be able to start accessing all the radical news you need in one place.

It’s always difficult starting new things. However, the joy of Mastodon is that it’s not dissimilar to Twitter – and it’s user-friendly. Moreover, it’s an opportunity to break away from the perpetual corporatisation of social media. As Daly summed up for the Canary:

the larger point isn’t about the fact that Elon Musk is simply an asshole, it’s the fact that one man can wield so much power. Giving one sole billionaire control of speech on a huge platform, to use it as a plaything when the website has been an important tool – not least for journalism – should never have been allowed to happen.

So, instead of just moaning about Musk, let’s do something positive. Mastodon could bear fruit – so, why don’t we give it a try?

Join the Mastodon independent media server – and make sure you follow the Canary too: https://independent-media.co.uk/invite/X5oAD7tP

Featured image via Mastodon – screengrab and the Canary