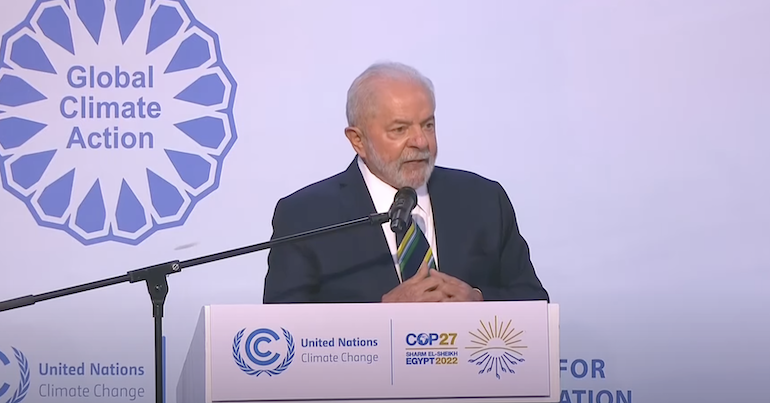 Brazilian president Luiz Inacio Lula da Silva, commonly referred to as Lula, received a warm welcome at the climate conference COP27 on 16 November, despite controversy over his decision to travel there in a private jet.

This is Lula’s first international trip since defeating outgoing far-right president Jair Bolsonaro, who presided over years of rampant Amazon deforestation. A staunch ally of agribusiness, average annual deforestation increased by 75% under Bolsonaro compared with the previous decade.

At an Amazon-region pavilion in the Red Sea resort of Sharm el-Sheikh, the new president said:

I am here to say to all of you that Brazil is back in the world.

Lula has offered to host the 2025 climate talks in the Amazon region. In keeping with his campaign promises, he also vowed to “put up a very strong fight against illegal deforestation” and announced the creation of a ministry of indigenous people.

This is Lula’s third presidential term – deforestation fell sharply during his previous time in power. Successful protection of the Amazon is in no small part due to the efforts of the many indigenous peoples who call it home. They face great peril trying to safeguard it, however.

Global Witness releases a report each year about people killed while defending their lands and environments. Its latest report is called Decade of Defiance, and shows that a total of 342 defenders have been killed in Brazil over the last decade, many of whom were indigenous.

A new sense of hope

Lula faced criticism for his choice of travel to the conference, apparently taking a private jet to get there. Nonetheless, his presence was welcomed by campaigners.

President Lula’s election victory in Brazil has the potential to breathe new life into this process with his progressive agenda that seeks to bring Brazil back to the table and end the disastrous climate policies of his predecessor.

While his government has a pavilion at COP27, Lula deployed two of his former environment ministers to lay the groundwork for his visit. One of them – Marina Silva, who is tipped to return to the job when Lula takes office on 1 January – said Brazil wants to set an example with Lula’s plan to fight deforestation.

Protection for the Amazon

Latin America’s most populous country grew more isolated under Bolsonaro, analysts say, in part due to his permissive policies towards deforestation and exploitation of the Amazon – the preservation of which is seen as critical in the fight against global warming.

Brazil is home to 60% of the Amazon, which spans eight countries and acts as a massive sink for carbon emissions.

Silva promoted the ideas of creating a new national authority to coordinate climate action among government ministries, and of pursuing a reforestation target of 12m hectares (over 29m acres).

The incoming administration wants the US to contribute to the Amazon Fund, which is considered one of the main tools to reduce deforestation in the planet’s biggest tropical forest.

Following Lula’s victory, the fund’s main contributors, Norway and Germany, announced they would participate again. This comes after they froze aid in 2019 in the wake of Bolsonaro’s election.

Colombian President Gustavo Petro and his counterpart, Nicolas Maduro of Venezuela, presented at COP27 last week an Amazon protection initiative that they hope Brazil will join.