Turkish democracy is officially dead and buried, as Erdoğan puts the final nail in its coffin - The Canary 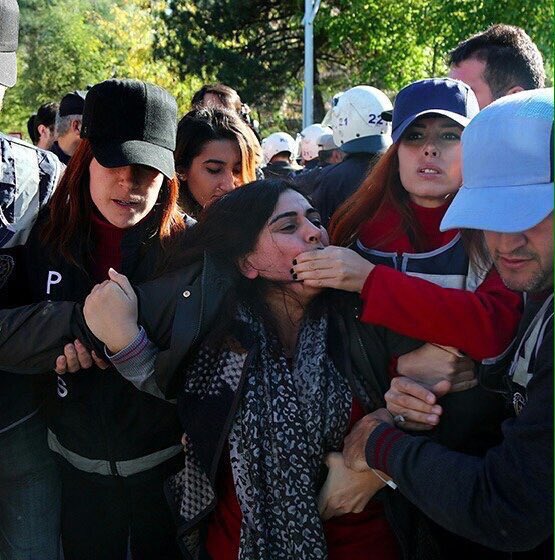 Arrests of opposition MPs are currently underway in Turkey. This is an escalation of President Recep Tayyip Erdoğan’s 15-month-long coup against his political opponents. And while there has been widespread condemnation of these arrests, this alone will not bring Turkish democracy back to life.

The peak of an intensifying purge

In the latest state crackdown, Turkish authorities have detained 11 lawmakers across the country from the left-wing Peoples’ Democratic Party (HDP). Two of those detained are HDP co-chairs Figen Yüksekdağ and Selahattin Demirtaş. There are also arrest warrants out for other HDP MPs relating to what Amnesty International calls “trumped-up terrorism charges”. Erdoğan has sought to link the pro-Kurdish HDP to rebels from the Kurdistan Workers’ Party (PKK) ever since ending promising peace negotiations with the group in July 2015.

But the arrests of Yüksekdağ and Demirtaş are not anomalies. In recent days, The Canary has reported on the escalation of Erdoğan’s post-coup purge, which has shut down JINHA Women’s News Agency and seen the arrest of the editor and at least 12 senior members of staff at liberal newspaper Cumhuriyet. Erdoğan’s regime has also appointed new police chiefs for 61 of Turkey’s 81 provinces, and dismissed over 10,000 civil servants from the Justice Ministry, the Education Ministry, the Health Ministry, higher education institutions, the armed forces, and other government departments and agencies.

Reporters Without Borders have condemned the recent crackdown. And Amnesty International has called for the immediate release of Turkey’s political prisoners.

Today is the day for everyone to take to the streets. All must come together around HDP. If not now, when? Today is the day to resist. Today is the day to protect our future. We will be in resistance everywhere we are against the coup. Nobody should fool themselves, we will never give up on the struggle for democracy and freedom.

Today’s detentions send a chilling signal about the state of political pluralism in Turkey.

Careful language to describe the death of Turkey’s democracy

Germany and Denmark soon summoned Turkey’s ambassadors to their respective foreign ministries. But Turkey’s other NATO allies were very careful with their language and actions. British Foreign Secretary Boris Johnson expressed only “very serious concerns” about events in Turkey, and the US Assistant Secretary of State Tom Malinowski issued a series of tweets saying:

As a friend and ally, [we are] deeply troubled that the government of Turkey has detained HDP leaders and other MPs while blocking internet access… When taking legal action against elected reps, democracies have higher duty to justify actions and preserve confidence in justice… Press freedom and internet access [are] essential to democratic and economic health. [We] urge Turkey to restore information access to its citizens now.

But the detention of the HDP co-chairs should come as no surprise; it has been a long time in the making. The roots of Erdoğan’s ongoing purge go back to the June 2015 elections in Turkey, when the HDP managed to gain the support of both left-wingers and conservative Kurds. Its success denied Erdoğan’s AKP an electoral majority which would have helped him to consolidate his personal power. As a result, the AKP launched a war against Kurdish communities a month later, which continues today.

Turkey’s young democracy has arguably been on its deathbed since July 2015. But now, with the arrest of Erdoğan’s most outspoken political opponents, the country’s shaky democratic façade is finally dead and buried. And feelings of ‘concern’ are not going to bring it back to life.

– Read The Canary‘s previous articles on Turkey, Kurdistan (and Rojava).