"This is the last time you’ll hear my voice", pleads refugee deported to notorious offshore gulag - The Canary 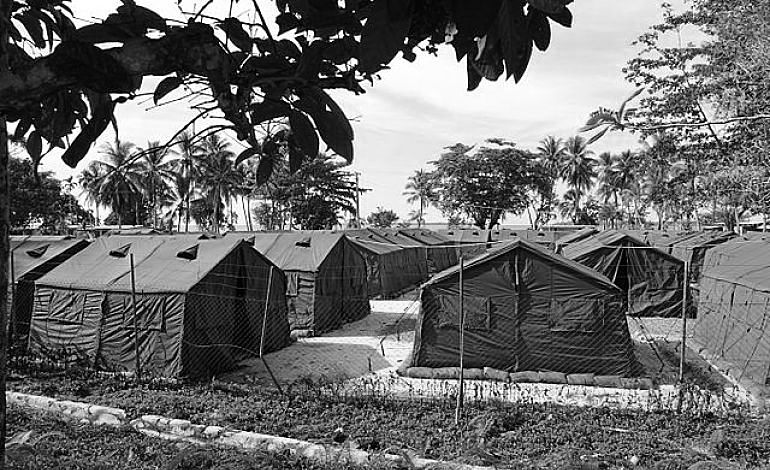 Loghman Sawari is a young refugee who fled Iran after his cousin was executed by the regime and his brothers imprisoned. After being illegally renditioned by Australia to its offshore gulag on Manus Island, Papua New Guinea (PNG), Sawari suffered isolation and beatings. He also attempted suicide.

He spectacularly fled to Fiji from PNG, where he was held illegally at the behest of the Australian government.

On his arrival in Fiji, a local family sheltered him. He wished to claim asylum immediately. But his lawyer, Aman Ravindra-Singh, had an agreement with Fiji’s director of immigration that his client could lodge his application for asylum later, so that he could organise his paperwork. That agreement turned out to be a ruse.

It was on the way with his lawyer to the immigration minister’s office that Sawari was snatched, dragged to a waiting car and driven off at speed. He was taken to a waiting plane at Nadi Airport.

It could have proved very embarrassing to Australia had Sawari been allowed to lodge his asylum claim. Details of his kidnapping by Australia, his rendition and imprisonment would then have been fully revealed.

Fears for his life

Sawari is now back on PNG and fears for his life. Before he left Fijian soil, he made a final phone call to a friend. He said:

This is the last time you’ll hear my voice and I know they’ll kill me.

A UNHCR statement condemned the action of the Fijian authorities, saying that the deportation of Sawari, a bona fide refugee, was in breach of the 1951 Refugee Convention [pdf]. The statement added that the UNHCR is “profoundly concerned for his welfare”.

Whether Loghman entered the country legally or not is irrelevant. So long as Australia keeps flouting its international obligations to asylum seekers and refugees, it will give a green light to other countries in the region to do the same.

Should Sawari be harmed (or worse, his life taken), then the person ultimately responsible for that would be Australia’s Prime Minister Malcolm Turnbull.

Refugees and the Trump effect

Turnbull’s judgement has also been brought into question with regard to the fate of hundreds of other refugees held on Manus and on Nauru. The now infamous telephone conversation between him and US President Donald Trump has highlighted again the latter’s bullying nature. Trump followed up the call with a tweet in his usual style:

Do you believe it? The Obama Administration agreed to take thousands of illegal immigrants from Australia. Why? I will study this dumb deal!

Turnbull hoped that Australia’s disastrous offshore refugee programme could be solved via a goodwill deal. That deal would see 1,250 refugees held on Nauru and Manus Island relocated to the US and other countries.

But that deal is now seriously in doubt. Given that Trump has made it clear that all the refugees President Obama agreed to resettle would be subject to ‘extreme vetting’. And given that the majority of refugees held on Nauru and Manus Island are from Iran and other countries banned under Trump’s executive order.

Turnbull must now either accept all the offshore-held refugees or relocate them to other safe countries. But if he has not got the political will to do so, the UN should intervene and organise the relocation.