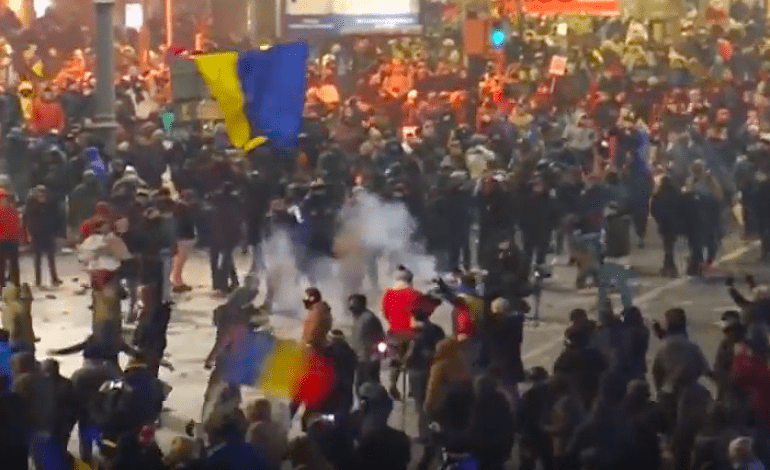 Things have been getting tense in Romania. And hundreds of thousands of people have just protested against a bill that would turn back years of anti-corruption efforts.

On 1 February, protesters took to the streets in cities across Romania against the government’s plans to decriminalise corruption. And riot police clashed with a number of them after being deployed on the second day of protest in Bucharest, the country’s capital:

Some reports say that a number of protesters threw firecrackers and smoke bombs at police, who in turn responded with tear gas. There were also reports of an arrest, arson, and some minor injuries to both demonstrators and police officers.

Protesters were opposing an emergency ordinance that would decriminalise misconduct if damages amount to less than 200,000 lei (€44,200).

The new coalition government, after just over one month in power, approved the ordinance very quickly and without public consultation. And it appears to benefit the government’s allies – officials currently facing corruption charges. In particular Liviu Dragnea, a Social Democrat (the leading party in the coalition) who could not become Prime Minister on account of charges against him. Current Prime Minister Sorin Grindeanu, however, claimed the measure was aimed at easing overcrowding in prisons.

Up to 300,000 may have taken part in the demonstrations, which were the biggest since the uprising that deposed dictator Nicolae Ceaușescu in 1989:

It turns the clock back for Romania on corruption.

One foot forward, two steps back

Romania has previously been lauded as a leader of anti-corruption in the region. Notably in comparison to neighbouring Bulgaria and Italy, as all three have sat at the bottom of anti-corruption indices. The EU, the US, and Romanian citizens have all praised these efforts.

In one year, they indicted 1,250 public officials for corruption. Including their Prime Minister. And the crackdown was led by the country’s National Anticorruption Directorate (DNA).

But it was also down to the election of President Klaus Iohannis in 2014, who vowed to keep the judiciary independent as well as empowering the DNA.

The President himself has marched in mounting protests since the government announced the plans. He has blocked the law from going through without public consultation, and urged a referendum on it. He is now petitioning a constitutional court to block the law, the last democratic measure he can take under a system that keeps the President from having any direct role in lawmaking.

But the government is adamant that the bill will go through. Prime Minister Grindeanu said:

We took a decision in the government and we are going to press ahead.

The international community is now frowning on the country and these measures, which could see EU funding taken away. In the meantime, opposition parties have given the government a vote of no confidence.

After such a successful anti-corruption drive, the latest attempts feel like a real coup against democracy. But Romania’s countrymen won’t take it lying down.