After the first Super Bowl under Trump, this star player makes one simple demand [VIDEO] - The Canary 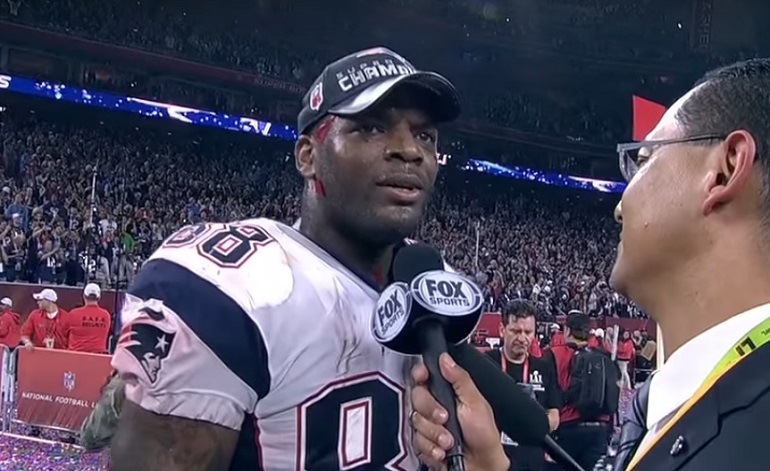 On 5 February, millions of people around the world watched the nail-biting finale of the 2016 American Football season. But just two weeks after the inauguration of Donald Trump as US President, it was difficult to separate politics from sporting spectacle. And one Super Bowl winner in particular didn’t hold back.

New England Patriots player Martellus Bennett spoke to Fox Sports Mexico after his team’s record-breaking comeback against the Atlanta Falcons. When asked how he’d feel about representing the National Football League (NFL) in Mexico later this year as part of the NFL International Series, he shouted:

He then said “Te amo México” (“I love you Mexico” in Spanish), before celebrating his team’s victory with his daughter.

Bennett isn’t one for hiding his feelings

But this wasn’t the first time Bennett had spoken out about Trump. Having played a crucial part in the Patriots’ season after the injury of Rob Gronkowski (one of the team’s star players), Bennett was also one of the team’s most outspoken representatives. Following Trump’s presidential victory, for example, he wrote a message online for his daughter, saying:

Your mom and I have a lot of work to do. We will continue to teach you How to love, accept others for who they are, think for yourself, help others in need, achieve what the world deem impossible… Together we can be the change we wish to see in the universe. We have a lot of work to do, but I think we will have help… Training starts today.

Before the Super Bowl, meanwhile, he said he probably wouldn’t go to the White House if his team won, insisting: “I don’t support the guy that’s in the house.”

He has also protested against ethnic inequality in the US. In September 2016, for instance, he and teammate Devin McCourty raised their fists at the end of the US national anthem, echoing the high-profile protests of other NFL players.

Making the most of an opportunity

More recently, while Patriots star player Tom Brady tried to avoid talking about Trump, Bennett felt the need to speak out. He said:

He also pointed out:

Other players are worried about their personal brands… I feel like a lot of players –  in certain situations they have chances to really impact the community with things they say, and so many people are looking to them for encouragement and examples and for a chance to promote change. But for a lot of guys it comes down to the dollars. What this brand or this company may say, or how I’m going to look if I speak out.

And Bennett has indeed led by example. Speaking out about Donald Trump’s immigration policies, he recently tweeted:

His comments after the Super Bowl on 5 February echoed those sentiments. We must spread love wherever we can. And we must also do our best to tear down the walls that divide us.

– Read more from The Canary about Mexico.