Neo-Nazi nationalists on the rise across Europe, and one country knows this only too well - The Canary 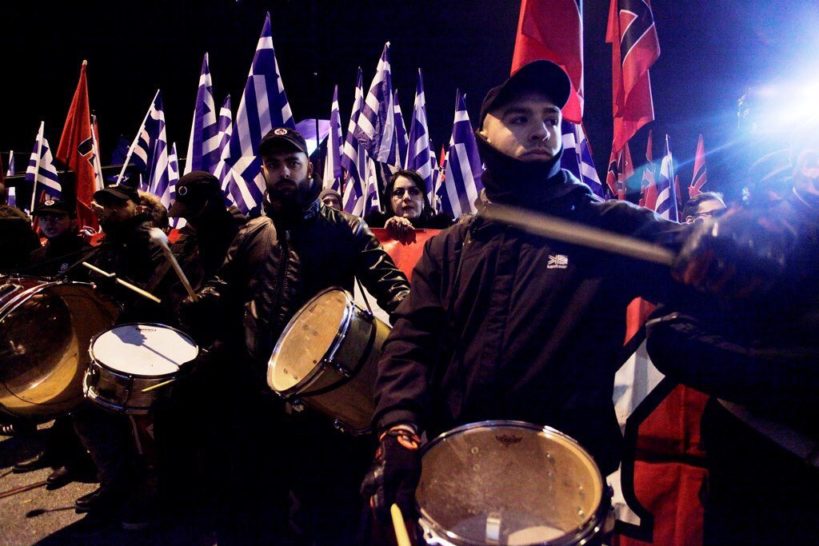 Europe is probably facing its most serious crisis since the 1930s and the outbreak of World War Two. Through populist nationalism, the far right are in resurgence, gaining credibility across the continent. But to see their true nature, we only need look to Greece.

After hiding in the shadows in recent years, the Greek neo-Nazis of ‘Golden Dawn’ have returned to the streets with a vengeance. On 31 January 2017, thousands of members and supporters held torch-lit processions in Athens. Their demand? A ban on refugees and immigrants similar to that of US President Donald Trump.

Trump is the planet’s keeper. He’s the president of the world’s superpower, and whether you like him or not, his policies are now validating beliefs and concerns across the globe.

What’s worse is that Golden Dawn is no fringe party. It’s the third largest political force in Greece, with 18 MPs. And its members make no attempt to hide their admiration for Nazism, as secretly taken photos and a 2013 Channel 4 investigation show.

On 18 September 2013, a gang of 30 people wearing Golden Dawn T-shirts chased and stabbed to death anti-Nazi musician Pavlos Fyssas. Giorgos Roupakias, who is a member of Golden Dawn [Greek], later confessed [Greek] to the killing.

In the wake of the murder, the Greek government banned Golden Dawn. And authorities arrested and charged a number of its MPs. Nikos Michaloliakos, Golden Dawn’s leader who had spent time in jail in 1979 for carrying guns and explosives in connection with the bombing of two cinemas, was also charged.

Michaloliakos went on to admit: “With regards to political responsibility for the murder of Fyssas in Keratsini, we accept it.”

69 individuals, including the entire Golden Dawn Parliamentary Group from the 2012 elections, are facing trial as part of an ongoing investigation into their activities.

Charges include participation in a criminal organisation, murder, conspiracy to murder, possession of weapons, racist violence, and possibly the killing of migrants and political opponents.

Authorities also arrested 23 people, including a ‘special guard’ and others with connections to the police. References to Golden Dawn made by two of the accused were secretly recorded.

There are also allegations that Golden Dawn infiltrated the Greek police.

They [immigrants] are primitive, miasmas and subhuman. We don’t care about their existence. We are ready to open the ovens.

Police have arrested Golden Dawn supporters/members for carrying guns and weapons. Golden Dawn is also linked to the murder of immigrants in Athens, and to attacks on immigrants and left-wing activists across Greece.

Since the trial, Golden Dawn has kept a low profile, aiming for ‘respectability’. But its Nazi-style activities in the years leading up to the trial tell a very different story.

Incidents (2013 to commencement of trial)

Donald Trump’s extremist policies (and the xenophobia linked to Brexit) embolden Golden Dawn and other far-right parties in Europe. And the difference between neo-Nazis and populist nationalists is often hard to spot.

All Europeans need to challenge this resurgence of the far right. We ignore it at our peril.