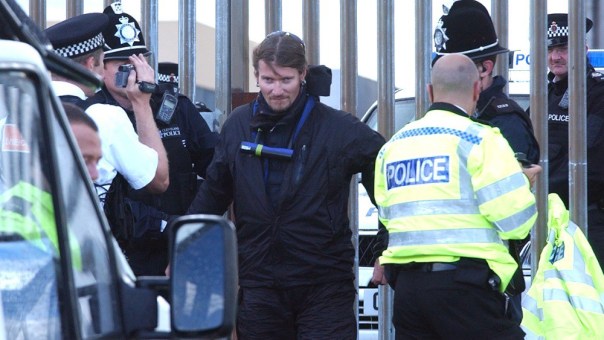 The Canary has a copy of a letter that confirms the Garda (the Irish police service) had a “relationship” with British undercover police officer – or ‘spycop’ – Mark Kennedy. And the revelation increases pressure on the Pitchford inquiry into undercover political policing, which is currently restricting its investigations to just England and Wales.

Demand for report to be public

In October 2016, Irish justice minister Frances Fitzgerald made a request [paywall] to Garda commissioner Noirin O’Sullivan for a report on the presence of Kennedy in the Republic. Politician Paul Murphy is now demanding that report be made public.

Murphy is also requesting that Enda Kenny, Ireland’s Taoiseach (or prime minister), clarify who gave permission to Kennedy, an officer with the National Public Order Intelligence Unit, to operate in Ireland. Kenny said he will raise the matter with the British Northern Ireland Secretary of State, James Brokenshire, in Dublin.

Meanwhile, a letter dated 23 March 2011 from the Commissioner of Police Martin Callinan to the Secretary General, Department of Justice and Law Reform, references Kennedy’s status.

That letter is here [pdf] in full.

In one section of the letter, Commissioner Callinan states that the police were fully aware of Kennedy’s “presence” in the Irish Republic. And they may have been monitoring his activities, as Callinan states he was not aware Kennedy committed any crimes. But this appears at odds with a recent statement by Murphy in the Dáil (the Irish parliament):

Callinan also acknowledges the perception that Kennedy was in the Republic with the “consent” of the Irish police. And that there was a “relationship” between the Irish police and the British undercover police officer:

Callinan emphasises the importance of that “relationship”, adding how such ‘arrangements’ were in the interests of “national security”. Further, he argues how it was essential that the police protect Kennedy and any other undercover police officers:

Kennedy took part in several protests in Ireland between 2004 and 2006. Including against President Bush’s visit to Ireland for an EU-US summit in 2004; and the Shell to Sea campaign in County Mayo in 2006.

Murphy told the Dáil that US citizen Sarah Hampton was in a protest group while in Ireland in 2005. And during that period, she was in a relationship with Kennedy. Hampton has since been given an apology for the way she was exploited by Kennedy.

we know of at least three other undercover British police officers who operated in this State – Jim Boyling, Mark Jenner and John Dines.

Kennedy’s undercover activities were prolific, covering not just Ireland but as many as 22 countries.

In February 2017, environmental activists won the right to a judicial review into the activities of Kennedy in the north of Ireland, as well as that of other undercover operatives in the province. Also at a conference in Dublin, the women who were in relationships with Kennedy spoke out to demand the Pitchford inquiry widen its investigations. Namely to include Ireland.

For now, with the publication of the 2011 letter, the cat is well and truly out of the bag.

UPDATE (21 April): The claim of Kennedy operating in ’22 countries’ appears to have been a case of ‘self-aggrandisement’ by Kennedy. The real figure is believed to be 11.