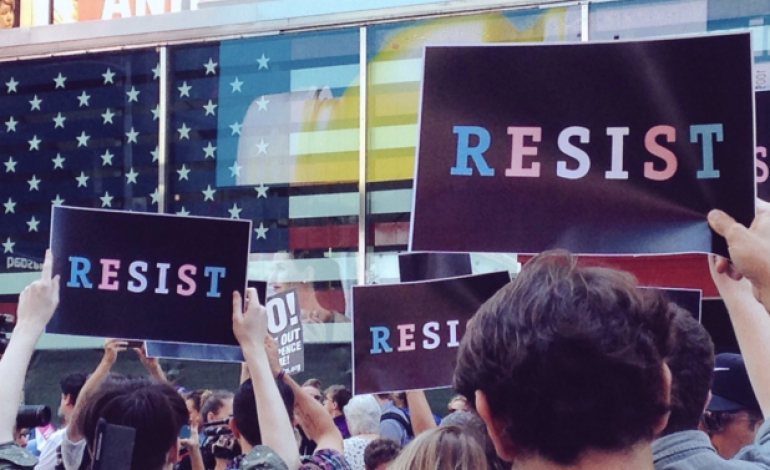 US President Donald Trump has sparked widespread outrage after tweeting that transgender people will not be allowed to serve in any capacity in the US military. He claimed that having transgender people in the military would result in “tremendous medical costs and disruption”. In his view, they would be a ‘burden’. These latest controversial tweets from Trump have seen thousands taking to the streets to protest. And one comedian also chimed in. Matt Bellassai tweeted:

Bellassai points out that trans people prove their bravery on a daily basis. As one report shows, trans people do not have it easy. In the US, 19% experience abuse or violence from a family member and 41% attempt suicide. The 2015 US Transgender Survey [pdf] highlights that 54% of trans people were verbally abused at school, while 24% were physically attacked. 30% say they were fired, denied a promotion, or mistreated in some other way at work due to their gender identity.

29% of respondents reported living in poverty, compared to 14% of the US population. 23% experienced some form of housing discrimination in the past year, such as being evicted from their home or denied a home because they were transgender. Another report shows that one in five trans people are homeless.

In short, banning trans people from the military would just be adding insult to injury.

It’s now becoming clear that Trump’s move to add more hardship to the lives of trans people lacks any rational basis. After all, he seems to have bent the truth about consulting generals and military experts about the decision. Secretary of Defense James Mattis and Army Chief of Staff Gen. Mark Milley apparently didn’t know anything about it until Trump announced it. In any case, the US Joint Chiefs of Staff Chair Joseph Dunford says the ban will not go ahead until there is a formal order from the president.

But given that Trump just revealed his transphobic beliefs on Twitter, many people fear that he will stick to his guns.

It is estimated that at least 4,000 military personnel are trans. And many have reacted, stressing that they are in no way a burden. Trans Navy seal Kristen Beck, who has fought in Iraq and Afghanistan, sent out a message to Trump:

Let’s meet face to face and you tell me I’m not worthy… There are a hundred different ways to make an announcement that are better than a tweet. It blindsided millions of people. It’s disrespectful.

A study published by the Rand Corporation concludes that letting transgender people serve in the military would have a “minimal impact” on readiness and healthcare costs. This is because so few personnel are trans. Authors also note that the UK and Israel allow all soldiers to serve, and they found no evidence that this open policy affected “operational effectiveness, operational readiness or cohesion”.

So it seems that Trump is relying on exaggeration and misinformation in order to promote a transphobic agenda. Protests against the announcement, meanwhile, continue across the country. And the LGBT community is standing firm against a president who seems intent on disparaging the most vulnerable groups in society.