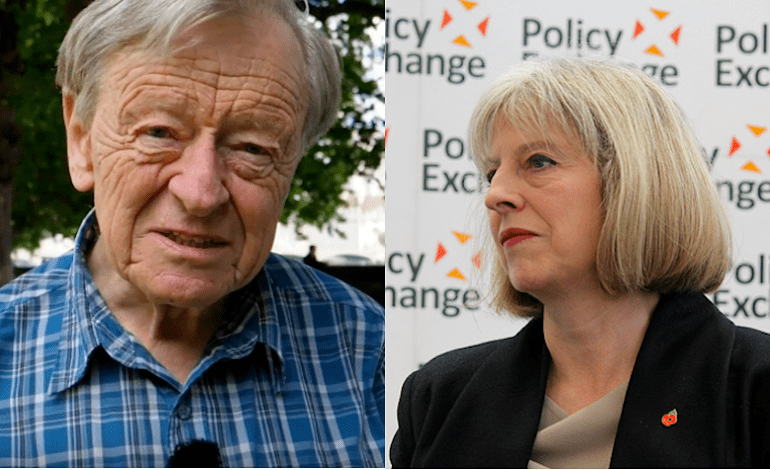 Holocaust survivor Lord Dubs has spoken to media outlet Double Down News (DDN) about his extraordinary past. He includes a message to Theresa May to save other children, just as the government saved him from the Nazis.

I was 6 years old. I remember when the Germans occupied Prague in March 1939, we had to tear a picture of President Beneš out of our schoolbooks and stick in a picture of Hitler, and there were German soldiers everywhere.

Dubs’s father wanted to leave the country immediately but his mother couldn’t leave, so she put him on the Kindertransport:

It certainly saved my life. If Nicholas Winton hadn’t organised the Kindertransport, if the British government hadn’t given permission for 10,000 Kindertransport children from Germany, Austria and Czechoslovakia to come to Britain, I don’t think I could possibly have survived the Holocaust.

His experience made him want to use politics for good and help other people:

When I see refugees in a desperate situation in some of these countries, it brings memories of the plight of refugees, millions of people on the move…I think Europe can do better than that.

At least 95,000 unaccompanied child refugees applied for asylum in Europe during 2015. And in 2016, Europol reported that 10,000 unaccompanied children had disappeared. Dubs visited young people in Europe living in harrowing conditions after already having suffered traumatic experiences in their countries of origin. This moved him to put forward his amendment to try to help.

After trying to persuade Dubs to remove his amendment, May conceded on the back of public opinion.

But to date, the UK has only taken 200 children and quietly stopped the scheme. In response, Help Refugees have started a legal challenge to reopen it.

Dubs is urging May to listen to him, and other members of the public, who are shocked at the treatment of refugees. And he’s asking May to remember the humanitarian actions of those before her:

I’m saying to Theresa May: you know about child refugees, you know Nicholas Winton who organised the Kindertransport from Prague which saved my life; before he died he was a constituent of yours.

Surely, surely, we can do better for child refugees than we’re now doing. Please think again.