As Trump reveals his true colours, far-right plans for more Charlottesvilles are revealed [VIDEOS] - The Canary 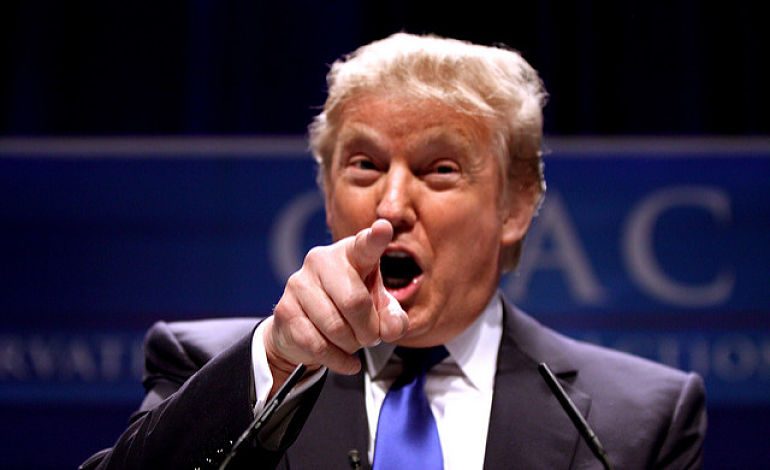 Chats and articles published by US fascists on the ‘dark web’ show they’re emboldened and encouraged by President Donald Trump’s latest (unscripted) speech about the tragic events at the 12 August Charlottesville rally. The Canary has accessed these conversations, which also reveal plans by the fascists for more Charlottesvilles and disruption of the funeral of the woman murdered at the rally.

In the immediate aftermath of the Charlottesville terror attack, some far-right groups were running for cover. But with Trump’s latest speech, the mood appears to have changed.

The Illinois Senate has just passed a resolution calling for police to classify neo-Nazi groups as terrorist organisations. But elsewhere, others are now describing Trump as a neo-Nazi sympathiser.

In stark contrast to an earlier scripted statement, many commentators believed that Trump’s unscripted 15 August speech at Trump Tower revealed his true views on what happened at Charlottesville. At best, the speech can be interpreted as moral equivalence; at worst, support for the far right:

Meanwhile, some US far-right groups/media outlets are turning to the ‘dark web’ to organise. The Daily Stormer website was closed down on 15 August by GoDaddy. But that website was then transferred to another provider on the ‘dark web’.

But that website is reportedly under DDoS (Distributed Denial of Service) attack from Anonymous. So The Daily Stormer moved again – to a Russian-hosted domain. Ownership is given as:

The Daily Stormer‘s latest article on their new Russian-hosted site (again, subject to DDoS attacks) the Trump speech is revealing:

This is huge. The entire Jewish media is pretending that the violence at Charlottesville was initiated by our side, while painting the opposition as good boys who didn’t do nuffin’. That, of course, is a disgusting distortion of reality. While it seemed like Trump was going to back down and stick to the official story (though halfheartedly), he’s now completely turned around and is attacking the antifa as being the violent terrorists they are. Ordinary people always experience disgust and loathing when confronted with leftist agitators in real life. This is natural, as all of these people are dirty, smelly, unkempt and dead-eyed subhumans.

But the media normally do a good job of hiding these people and putting a slick coat of varnish over this human garbage in their portrayals. So the average person really has no idea about the true nature of the antifa. The Trump condemnation is one of the first times when there is a mainstream debate about who might be the “good guys” between the Communists and the Nazis. And as soon as you ask the question, our side basically wins automatically. All we need for a major cultural victory is an honest comparison. Anyone seeing us fighting against antifa will be instinctively reminded of superheroes taking out the trash. This is a huge victory for us.

The article concludes with:

Meanwhile, The Daily Stormer bulletin board system administrator Andrew Auernheimer, known as ‘Weev’, has asked supporters to do “some research” on the funeral of Heather Heyer, the woman murdered at the Charlottesville rally: 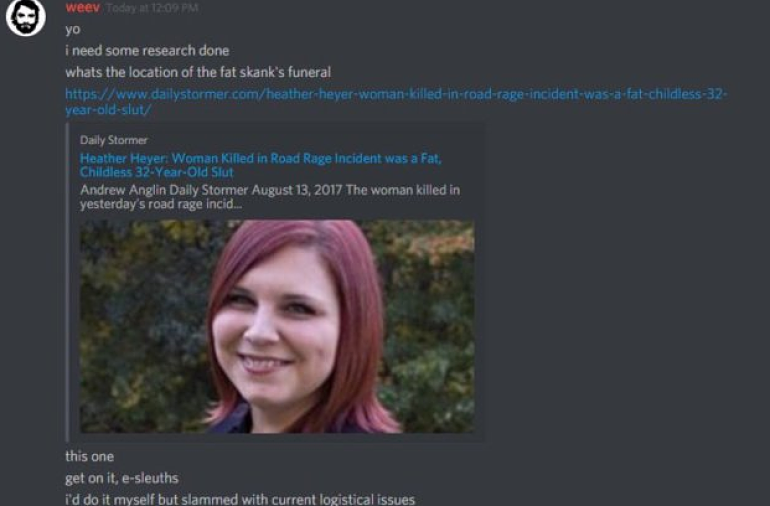 What’s the location of the fat skank’s funeral… get on it, e-sleuths. I’d do it myself but slammed with current logistical issues. I want to get people on the ground there.

In the chats, members mock those injured and killed in the car attack at Charlottesville. Also discussed are plans to bring more guns to the next rally.

Discord has now shut down the chat facility of altright.com.

Meanwhile, the ‘Three Percenter‘ armed militia, which formed a security cordon for far-right groups in Charlottesville, has made an announcement, It now says it will be “standing down” from any further participation with rallies involving neo-nazis and white nationalists.

But ominously, it adds:

We have intel that shows that these protests will continue to spill over into the days to come, as well as into other cities around the nation.

In time, Trump may regret his words, should more violence ensue. His allies like Theresa May (who has refused to criticise Trump on this matter) might too. But one thing is for sure – this problem isn’t going away any time soon.