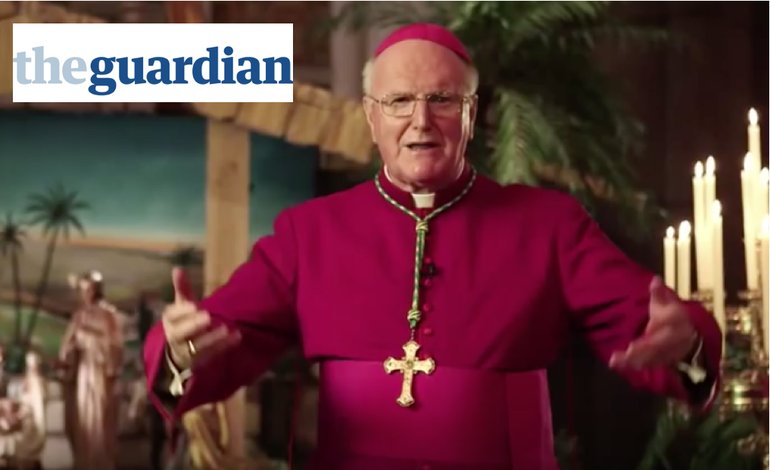 The Guardian has published a call that confidentiality rules should protect Catholics who admit to child sexual abuse in confession. While the author rightly calls on us to consider our own humanity, she neglects entirely the issue of widespread child abuse within the church. Abuse is about shame, and silence. And it’s time to break both.

First, we need to set the piece in the context of the priest abuse scandal. Representatives of the Roman Catholic church have engaged in child sexual abuse on an industrial scale.

The church abused children in the US, Austria, Germany, the Netherlands, Belgium, Italy, Malta, Spain, Switzerland, Brazil, Ireland, the Dominican Republic and Australia. From local priests to cardinals, church leaders conspired to rape and sexually assault children; and protect each other (and the church) from justice. In 2012, experts advised the Vatican that there could be 100,000 victims of clerical child sexual abuse in the US alone.

Australia provided one of the most robust responses to the scandal. It launched a royal commission into both the abuse and the cover up, with extraordinary powers of subpoena. And it found that, between 1950 and 2015, 7% of Australian priests were accused of abusing children. In some orders, up to 40% of brothers had allegations of abuse against them. The commission later established a key reason that so few accusations ever made it to the police.

The seal of the confessional

This reason was the seal of confession. This internal church law states that all sins admitted in the confessional remain in the confidence of the priest and the penitent. The commission states in its report:

we heard evidence of a number of instances where disclosures of child sexual abuse were made in religious confession, by both victims and perpetrators

The commission found that child abusers and survivors alike were bringing their stories to confession. And the church treated the crime as any other sin; forgivable by God and outside the jurisdiction of the justice system.

While the perpetrators were left to continue their cycle of abuse, the abused were shamed and silenced.

The commission found that, to break the cycle of shame and silence, it had to break the sanctity of the confessional. It recommended that priests who fail to report child sexual abuse for any reason, including the confessional seal, should be answerable to the justice system.

Australian archbishop Denis Hart (see featured image) has stated publicly that he would go to jail rather than report child abuse heard in confession. This is unsurprising from Hart, who has his own history of keeping secrets inconvenient to the church. The archbishop was accused of burying a report that showed widespread humiliation and bullying of LGBT students at Catholic schools.

Vivian Waller, a lawyer who represents victims of child sexual abuse, argues that Hart and his church need to change. She says:

I think it’s about time the Catholic Church was dragged out of the dark ages.

We can no longer think about sexual offending against children as some kind of forgivable sin.

But in her opinion piece for The Guardian, Joanna Moorhead sides with Hart and the Catholic church. And the piece has gathered a lot of negative attention. Some people are even accusing the author of putting the safe spaces of priests above the personal safety of children. 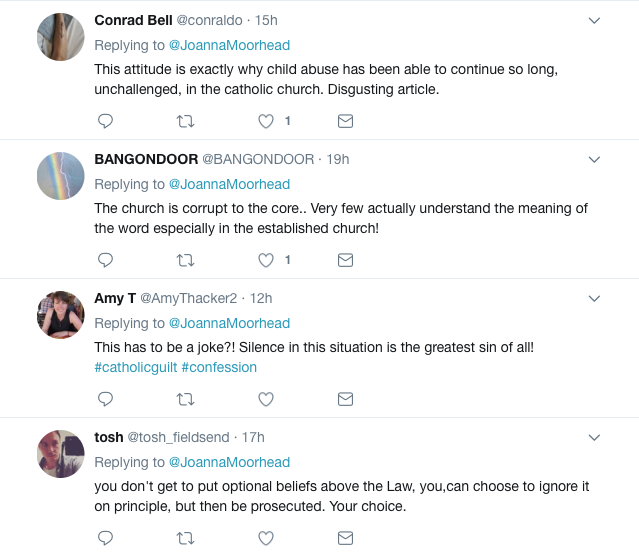 While Moorhead may well be making this appeal in good faith, she completely ignores the context of the abuse scandal. Taking into account the history of the scandal, her argument is at best unhelpful and at worst dangerous.

How Moorhead got it wrong

First, she treats the issues of abuse and the confessional as separate. She writes:

There is nothing that should not be done to prevent [child abuse]. But the issue of confidentiality in the confessional is entirely separate, and it pertains to every terrible and unthinkable crime under the sun. To undermine it goes to the very heart of what all Christians believe, which is that no sin is so wicked that it cannot be forgiven by God.

But as the commission found, the confessional is intrinsic to the cover up. The closest priests often got to resolving confessed abuse was to relocate known child rapists to abuse elsewhere.

Second, Moorhead places the church above the law, stating:

In the Catholic church, the priest in effect ‘deputises’ for God: he is a conduit, a mouthpiece if you like. He embodies, in that box, this fundamental Christian belief – that we can all be forgiven.

Believers of any faith may view their faith as more important than the law. But that should never protect them from the law. Child sexual assault and rape are not simply sins, they are crimes.

Third, Moorhead argues the change violates the “safe space” of “sinners”. This is perhaps the most superficially benign but dangerous element of her argument. For decades, the church shamed and silenced child victims of sexual violence. Those children are now survivors, seeking justice for the crimes committed against them. The safe space for those accused as perpetrators exists within the legal and justice systems, not the silence of the confessional. As Stephen Woods, a survivor of the priest abuse scandal, told The Guardian:

It is the most heinous of criminal activity you can imagine, and for a religion to declare that it’s their right to hide it is a most disgusting argument. It’s immoral.

Moorhead’s entire argument rests on a flawed assumption. She portrays the church as an independent and benevolent authority, rather than an integral facilitator of the abuse. The church had decades to deal powerfully with abuse within its ranks. Instead, church leaders across the world chose to cover it up.

While theologians muse on the sanctity of confession, this should not be the preoccupation of the justice system. Child sexual abuse is a crime, and so is withholding evidence of such abuse. Safeguarding exemptions already apply across many professions which have duties of confidentiality – from the doctor’s surgery to the therapist’s couch. Religious orders should not be exempt.

The Moorhead recipe has already failed. Not just in Australia, but across the world. Silence and secrets helped create this scandal. They will not be a part of fixing it.

– The NSPCC provides information and support to present and past survivors of child abuse.

– If you suspect a case of child abuse, report it to the police immediately.

– If you, or someone you know, need to talk, call Childline on 0800 1111. Also support YoungMinds, the voice for young people’s mental health and wellbeing. Or volunteer with Childline.

– See more from The Canary about the Catholic church here.