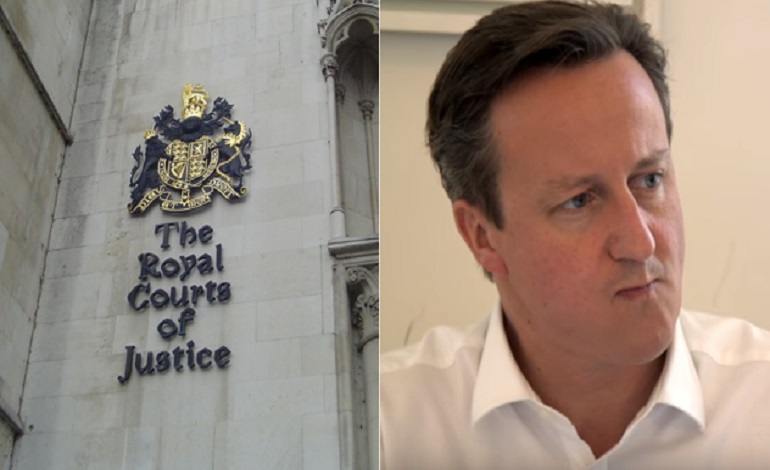 There were chaotic scenes on Thursday 17 August as Oxfordshire County Council, the borough in which David Cameron’s former constituency sits, appeared in a central London court. It was there to defend itself in a case which is a legal first. And the case the Tory-run authority had to answer? That its austerity-driven cuts to vital services may have broken the law.

The Court of Appeal was hearing the case of Luke Davey. In November, a judge granted the 40-year-old from Oxfordshire a judicial review against the council, following a 42% cut to the amount he received to pay for his care and support. This is because Davey has quadriplegic cerebral palsy, is registered blind, and requires assistance with all of his intimate personal care needs.

But Davey’s case is a legal first, because his lawyers are using the Care Act 2014 to argue that the council has broken the law. Specifically, that Oxfordshire County Council has breached its obligations under the “wellbeing” principle of the act.

Disabled people’s organisation Inclusion London and campaign group Disabled People Against Cuts (DPAC) are supporting Davey’s case. The groups had organised representatives to support Davey before and during the hearing. And in another legal first, Inclusion London was granted an intervention in the case by the judge: the first time an organisation led by disabled people has been given this privilege.

But things didn’t go smoothly for the campaigners.

At first, they gathered outside the main entrance to the courts, raising awareness of both the case and the broader issues facing sick and disabled people in society: 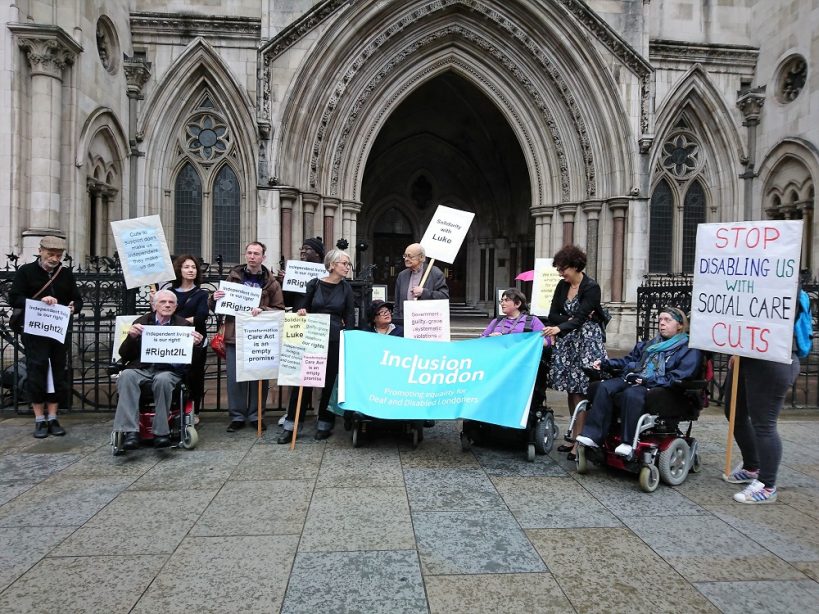 And campaigners like DPAC Steer Group member Nicola Jeffery were also highlighting the closure of the Independent Living Fund (ILF), which had previously supported disabled people to access their communities and maintain their day-to-day lives. But the Conservative government abolished the ILF in 2015: 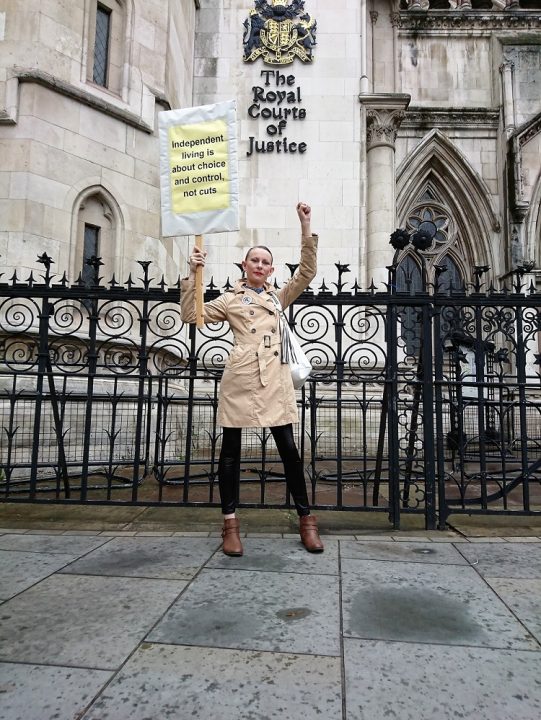 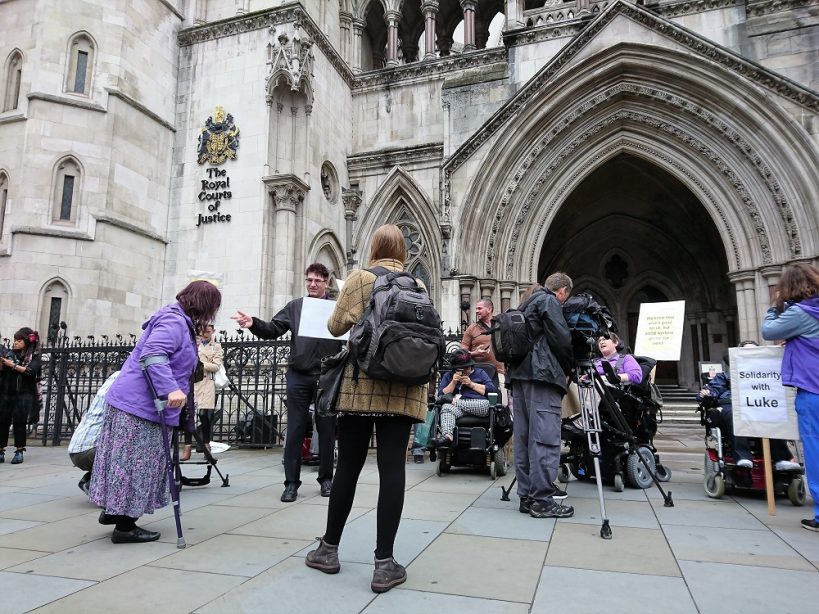 But there were angry scenes when disabled campaigners, their solicitors and the media tried to enter the court building. Security at first told them they could not go in, as there were “not enough staff on duty” to cope, and they were not willing to open the disabled entrance.

After the intervention of a reporter and several wheelchair users, the court’s security opened up the supposedly ‘accessible’ entrance to the court. But the entrance was barely accessible, and one disabled campaigner was nearly knocked to the ground by a passing cyclist:

Eventually, people got into the court building. But even then, they were (as one disabled campaigner put it) “herded like cattle” along a corridor: 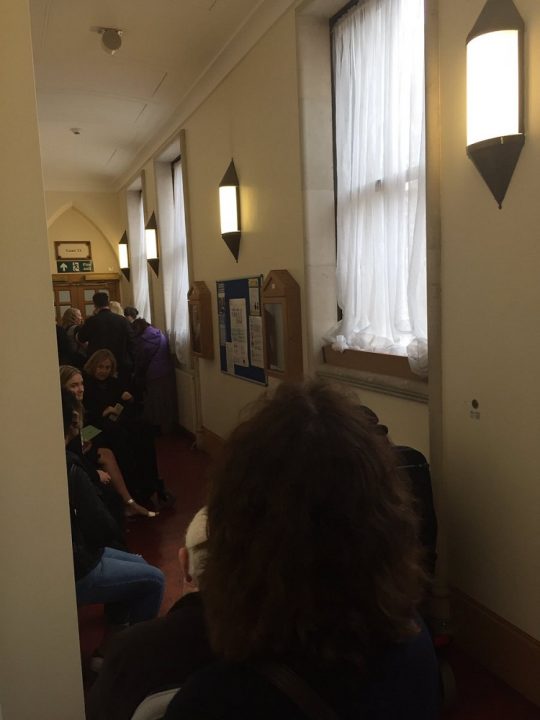 Davey’s case, if successful, could set a precedent, as it’s the first time the Care Act 2014 has been cited in law. The council argues that there were two underlying reasons given for its decision to reduce Davey’s personal budget. Specifically, that:

But his solicitors say that, by cutting his support from £1,651 a week in 2015 to £950 a week now, Oxfordshire County Council has breached Davey’s rights under the wellbeing principle of the act. Specifically, that it will cause/pose:

The wellbeing principle of the Care Act says that a council has a legal duty to “promote” a person’s wellbeing. Specifically:

The Canary contacted Oxfordshire County Council for comment. It said:

Oxfordshire County Council along with all local authorities, is having to consider carefully how to best meet the needs of those with significant disabilities. It believes it has done so fairly and lawfully for Mr Davey and will continue to do so. We look forward to receiving any guidance from the Court of Appeal in relation to these difficult decisions. The Council is working with Mr Davey and his family to ensure his care needs continue to be met.

The judge will not make their decision immediately. But if the court finds Oxfordshire County Council has breached the wellbeing principle, then it must review Davey’s support package. And aside from that, the case could set a precedent for other people to bring judicial reviews against local authorities.

This is because, as The Canary previously reported, in London alone some councils have cut people’s support by up to 68% since 2015; meaning Davey’s case could open the floodgates for people wanting judicial reviews. And at a time when central government is still cutting welfare, this single case could lead to many more councils ending up in the dock over their abandonment of disabled people.