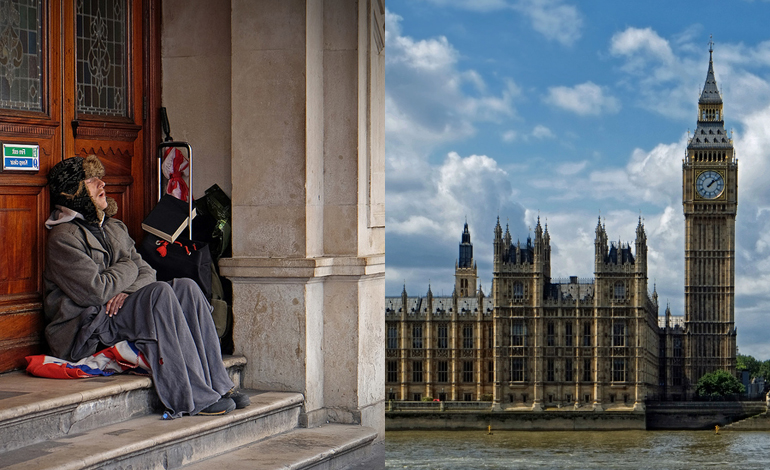 Crisis recently revealed that 9,100 people are sleeping on the streets of Britain at any one time, and that nearly a quarter of a million are homeless. These numbers [pdf] have exploded since 2011, when rough sleeping was 50% lower and the number of people in temporary accommodation was nearly half what it is now. And it’s no coincidence that this surge of homelessness coincides with Tory rule.

The Homelessness Projections report, published on 10 August, says that:

If current policies continue unchanged, the most acute forms of homelessness are likely to [keep] rising, with overall numbers estimated to rise by more than a quarter in the coming decade and two and a half times by 2041.

And while it mentions poverty and housing affordability as important factors in this upshot of homelessness, we must return to a previous Crisis report to understand the details of these factors.

Rent is too high

In March, the latest statistics from the charity’s long-term study The Homelessness Monitor came out. They highlight the spiralling cost of rent in the private rented sector (PRS) during the past seven years as the main driver behind people losing their homes.

The end of an assured shorthold tenancy (AST) – the standard private rental contract – made up less than 11% of the total number of people becoming homeless in 2010. By late 2016, this had nearly quadrupled to over 31%. In absolute figures, this means it rose from under 5,000 households to more than 18,000 households. 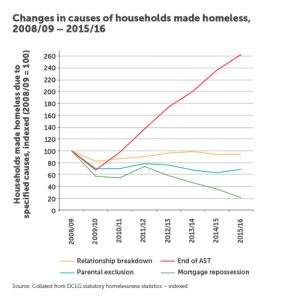 The PRS nearly doubled in size between 2000 and 2017, with successive governments increasingly reliant on it to provide housing for people. Yet at the same time, it seems the Tories have done everything they can to make it impossible for many people even to rent.

Crisis points the finger squarely at Coalition and Conservative government policies. In particular, the introduction of the Localism Act in 2011, cuts to Local Housing Allowance in 2011, and changes to Shared Accommodation Rate in 2012.

They don’t care about us

All of these policies were led by Cameron’s Tories and reversed a previous downward trend in homelessness. May’s government has yet to criticise or reverse any of these decisions. In February, the government promised greater security for tenants in the PRS, but this was quickly shown to be a “massive disappointment”.

At this point, it’s a cliché to say that anyone could become homeless. But March’s Crisis report shows that traditional ideas of routes towards homelessness are out of step with the current reality. It’s not the middle-aged divorcee whose mortgage fell through; or the addict spending every last penny on their drug of choice. It’s the family walking past you in the street that now needs to find another £100 for the month thanks to frozen benefits; and the 25-year-old whose rent costs half their wage.

The Tories have the power to change this. At a time when people are hitting desperation for a place of warmth, their government should be helping the most vulnerable. It has the power to do this. But it doesn’t seem to have the will.

– Take a look at the Everybody In campaign. Support Shelter. And check out Generation Rent.