A group of internationalists has travelled to Iraqi Kurdistan, in solidarity against Turkish bombing - Canary 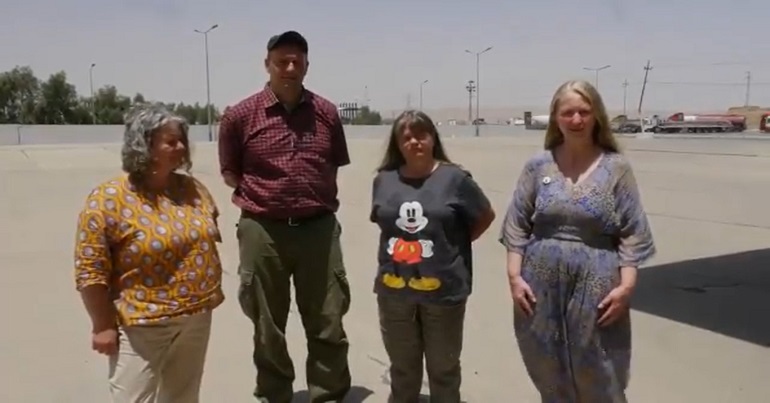 A delegation of people from all over Europe has travelled to Iraqi Kurdistan to protest against the Turkish invasion and bombing. And this statement from the Defend Kurdistan campaign explains the urgency of the situation:

In April, the Turkish state initiated a new, wide-ranging military campaign in South Kurdistan in the regions of Matina, Zap and Avashin. Heavy battles continue in these regions, with the Kurdish guerrilla forces fiercely resisting this illegal invasion. These large-scale attacks target not only the Kurdish guerrilla forces, but also the achievements of the Kurdish people, with the aim of occupying South Kurdistan. To date, the response to these attacks on the international level has unfortunately been muted. Seizing on this silence, the Turkish regime has put in place their plan to occupy all of Rojava (the region of North and East Syria) alongside South Kurdistan. In so doing, Turkey is determined to ethnically cleanse this vast area – 1400 km long – from North-West Syria to the Iraqi-Iranian border. At the same time, Turkey is waging a drone war against the Maxmur refugee camp, a gross violation of international law. Connected to this policy of ethnic cleansing, the Turkish military also hopes to depopulate the Sinjar region, home of the Yazidis—and thereby achieve what ISIS could not.

We, as a delegation from all over Europe, have come to Kurdistan aiming for peace and freedom. Politicians, academics, human rights activists, syndicalists, journalists, feminists and ecologists from over ten countries wanted to get direct impressions of the situation and stand up to end the war and destruction.

Pierre Laurent, deputy president of the Senate of France, said on behalf of the delegation:

We are a peaceful and solidary peace delegation in solidarity with all the Kurdish people and we will build diplomatic pressure to stop the Turkish invasion of Southern Kurdistan.

Stop the weapons exports to Turkey

The delegation has been gathering testimonies from people who have suffered as a result of the Turkish bombing. They spoke to Peyman Talib, a woman who lost her leg as a result of a Turkish drone attack.

Peyman lost her leg in the attack.

”They say Turkey only attacks right at the border and only attacks PKK.
But that is only an excuse. I am a civilian and I live close to the city and they attacked me anyway.
They do not care about human rights.“#defendkurdistan pic.twitter.com/ArP5vYfvKL

Turkey bombed the refugee camp #Mexmûr on June 5th, following a thread Erdoğan had made a few days earlier.
The #Delegation4Peace wanted to visit the people of Mexmûr today in solidarity, but was stopped and sent back by the Iraqi military at a checkpoint.#defendkurdistan pic.twitter.com/4C8jbkTj45

And on 21 June, the group was denied access to Qandil.

Qandil has been under increasing attacks from the Turkish military in recent months. Turkey is attacking Qandil because the Kurdistan Workers’ Party (PKK) has its base in the region, but its drone attacks and shelling are deadly and indiscriminate.

Demonstrations broke out after the delegation was refused access to Qandil. Demonstrators were met with warning shots by security forces:

Because the way to #Quandil is still closed a demonstration started.

Already after 200m the demonstration was stopped by warning shots and has to return.

Several Kurdish movements who joined the international delegation in their attempt to reach Qandil have criticised the Kurdistan Democratic Party, which controls the area, for preventing freedom of movement.

Unfortunately, the Kurdistan Region (KRG) and the Iraqi government have done little to stop Turkey’s occupation attempt. In particular, it has been disappointing for us to see how Kurdistan Democratic Party (KDP) officials have even tried to legitimize the Turkish occupation. Whatever Ankara’s economic pressure might be, the KDP must not allow itself to be turned into a Turkish proxy, as the consequences of this war can be grave for all of Kurdistan and the region.

One of the people the International Peace delegation spoke to in the village of Kuna Masi said:

The international delegation is part of a global movement against the Turkish attacks, and in solidarity with the people under attack in Northern Iraq and North and East Syria. You can follow the delegation’s progress on Twitter here.