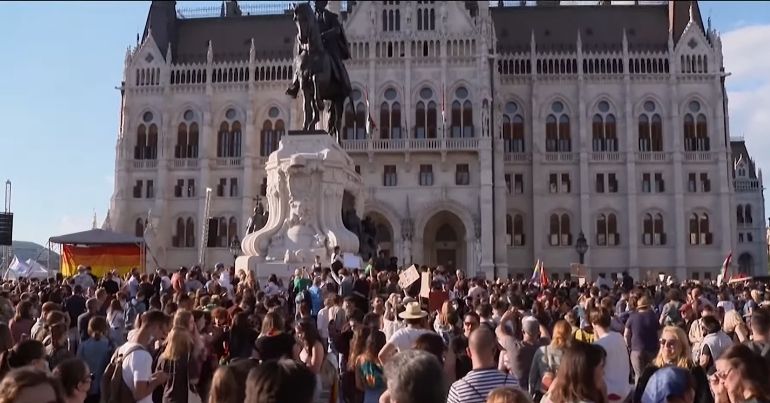 Campaigners are calling for the EU to take action against Hungary after its parliament passed another anti-LGBTQI+ law. On 15 June, Hungary voted through a law that bans showing schoolchildren LGBTQI+ material or featuring gay people in TV shows for under-18s.

The Fidesz ruling party and far-right Jobbik party voted the law through 157-1, despite warnings from human rights campaigners across Europe. The law also stops anyone not on an official register from carrying out school sex education classes. So a campaign group’s petition is calling on:

the European Union to step up immediately and use all tools available to force the Hungarian government to retract the law.

“Solidarity alone will not be enough”

Under Viktor Orbán, Hungary has passed several laws targeting LGBTQI+ rights. In May last year, the government ended legal recognition of gender change. It also decided to amend the constitution to prevent gay couples from adopting.

More than 10,000 people demonstrated outside the Hungarian parliament on the day the law was passed. Campaigners are now calling for the EU to take action to make Hungary retract the law.

This is a dark day for LGBTI rights and for Hungary. Like the infamous Russian ”propaganda law” this new legislation will further stigmatise LGBTI people and their allies. It will expose people already facing a hostile environment to even greater discrimination.

But solidarity alone will not be enough.

The EU and its member states must take urgent steps by raising this issue at the next General Affairs Meeting in the Council and ensuring that the EU is a safe place for LGBTI people.

Children at risk of “discrimination and violence”

Global LGBTQI+ rights campaign group All Out has launched a petition calling on the EU use “all tools available” to get Hungary to retract the law. More than 21,000 people have signed the petition.

The Hungarian government claims the legislation aims to “protect children,” but the opposite is true. By fanning the flames of homophobia and transphobia, LGBT+ children and families are put at further risk of discrimination and violence. …

As a member of the European Union Hungary has committed itself to respect the human rights of its citizens. In passing this legislation it has clearly violated this commitment and must face harsh consequences.

ILGA Europe, which advocates for LGBTQI+ rights across Europe, is working with Hungarian activists to advocate to the EU to impose sanctions on Hungary.

However, economic sanctions have been found in the past to often have negative impacts on human rights and often adversely affect the poorest in countries.

ILGA Europe’s ranking of LGBTQI+ rights in Europe, published in May, found that progress has come to a “standstill” over the past year. Poland is the lowest ranked EU country, but Hungary’s score for legal and policy practices decreased massively from 2019 to 2020.

As thousands of people marched for Warsaw pride over the weekend, Polish people expressed fears about losing further rights for LGBTQI+ people after the news from Hungary. For example, the Catholic church and governing party leader are currently backing a bill to attempt to ban pride parades in Poland.

One prominent activist marched with a Hungarian flag in solidarity.

As Orbán prepares for the general election in 2022, his party has been accused of following the ‘ramping up’ of anti-LGBTQI+ policies like their Polish allies.