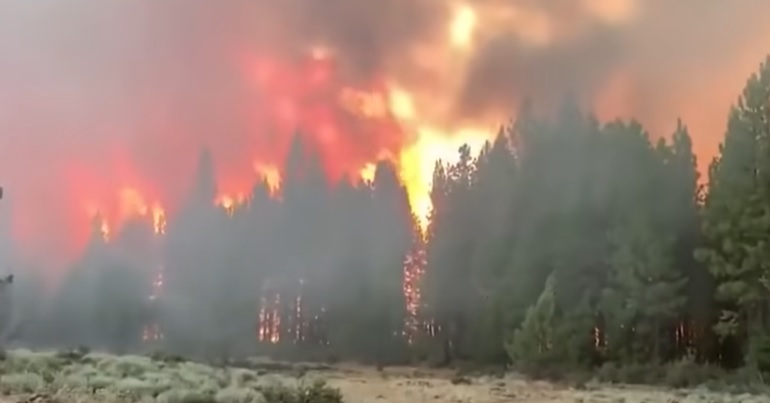 As numerous NGOs laid out in a recent report titled The Big Con, big polluters are promoting lots of climate crisis ‘solutions’ that don’t threaten their bottom lines. For many years, they’ve championed the idea that their polluting activities can be ‘offset’ by investing in forests and spaces that suck up carbon.

As the climate crisis intensifies, however, this fix is quite literally going up in flames.

Welp, one of the biggest carbon offset projects is burning. The Colville IFM project represents over 14M tons of carbon offsets, or ~6% of all credits in the CA compliance market.

So… how about those buffer pools? pic.twitter.com/N43mvcKknh

Colville IFM is a Californian carbon offset project. That is, it’s a project that companies can purchase carbon credits from to offset their carbon pollution elsewhere. The oil and gas giant BP is a key supporter in Colville IFM through its purchase of credits. It’s also a majority stakeholder in the carbon offset development company involved in the project. BP says the Colville project is “designed to preserve the current forest carbon stocks on nearly half a million acres of forest land in Washington state”.

Due to wildfires these ‘forest carbon stocks’ have been burning. And its not the only one at risk according to Cabiyo:

The Spokane IFM project (1.5M credits) is also under threat from the Ford Corkscrew fire in the lower right.

Indeed, as Politico pointed out at the end of July, the Bootleg wildfire raged through another offset project in Oregon. The rules surrounding offsets do often anticipate fire damage and require ‘buffer pools’ for projects. These pools are areas where projects place part of their credits in reserve – like a rainy day fund (without the rain). But critics warn that these pools may be too small to make up for losses within projects’ main forest areas, as climate crisis-driven wildfires grow in intensity.

Carbon offsetting projects, like the UN’s Reducing Emissions from Deforestation and Forest Degradation (REDD+) schemes, have faced lots of criticism. They’ve been lambasted for not substantially reducing overall carbon emissions and severely reducing the autonomy and sovereignty of local, forest-dependent peoples over their land. Companies have also claimed to be protecting forests that were already well-protected, rendering the carbon credits meaningless.

Nonetheless, they’re a key part of the polluters’ favoured ways to address the climate crisis. As The Big Con report pointed out, carbon credits sit alongside ideas like burning trees for energy, capturing and storing carbon, and putting faith in hydrogen (most of which is created from fossil fuels). The report’s authors argue that these purported solutions are smokescreens that merely serve to allow companies to continue polluting.

The solution that’s staring the world in the face is, of course, to just stop polluting and quickly phase out greenhouse gas-emitting activities – like those of the fossil fuel industry – entirely. But funnily enough, big polluters rarely shout from the rooftops about this.