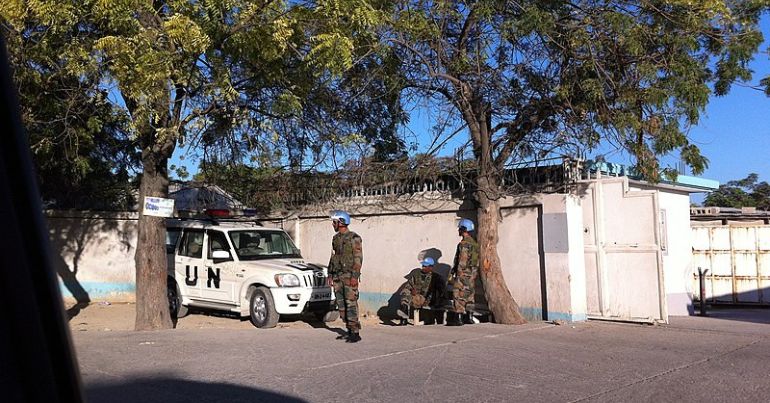 Foreign military intervention in Haiti is being talked up again in the press. On 15 October, it was being reported that the Biden administration was drafting a resolution to deploy forces to the Caribbean nation. The mainstream media tells us the Haitian crisis is a matter of violent gangs, fuel shortages and cholera. In response, for powerful imperialist nations, the military is framed as a cure-all. That’s despite the lessons from, to pick just two, Iraq and Afghanistan.

To the uninitiated, sending in the marines might seem like a sound idea, even in spite of the clamour of voices against it. In fact, 90 human rights and peace organisations signed a letter opposing military intervention. Published in Counterpunch on 1 November, signatories said the US government should:

reflect on the long history of international interventions in Haiti, and how those actions have served to undermine state institutions, democratic norms, and the rule of law.

The joint letter moves past simply blaming gangs to look at the deeper systemic issues at play. Fundamentally, Haiti’s poor are victims of a system which impoverishes them:

At the heart of the insecurity plaguing Haiti is the continuation of a political and economic system that excludes the vast majority of its citizenry.

It follows that the answer is not military intervention – better described as military interference – but a project of social uplift:

A long-term solution can only be achieved by addressing these underlying dynamics of inequality and exclusion and by providing for the population as a whole.

Interventionist arguments are seductive. That’s partly because they contain elements of the truth. There certainly is a crisis in Haiti which is harming people there. As the Guardian reported:

There is no question that Haiti is in a terrible crisis, possibly the worst in our lifetimes. The gang conglomerate has blocked the country’s main fuel terminal and brought almost everything to a standstill.

The fuel shortages affect every aspect of life:

Nothing functions without fuel. A big water bottling plant temporarily shut down. Hospitals have closed their doors or reduced capacity. The prices of basic commodities, like rice, have soared past most people’s grasp.

Alongside this, there have been cholera outbreaks, and the UN has reported sexual violence against women and girls.

US allies such as Canadian prime minister Justin Trudeau have called for intervention too. It’s easy to see why centrists and others with undeveloped politics could fall for the pro-interventionist argument. But ignoring Haiti’s historical and political reality is a prerequisite for making these arguments.

As journalist and former human rights lawyer Pooja Bhatia argues in the Guardian:

The view from Haiti is generally different: foreign intervention causes disaster. This idea can be counterintuitive and deeply uncomfortable to Americans, but it has the great virtue of being based on facts.

Bhatia, who lived in Haiti, reminds us that Haiti was a state born of slave rebellion. It has been subjected to repeated occupations since its people overthrew their French colonizers. Very often, this has been by the US, usually with a White Man’s Burden-type rationale. And in the end, military interference has mainly benefited US investors and local authoritarians.

Bhatia questions the suggestion that Haitians themselves, rather than just the current premier Ariel Henry, want US troops back in their streets and homes:

Headlines have reported that Haiti has requested intervention. This is inaccurate. It’s Haiti’s premier, Ariel Henry, who has requested it. Henry more or less appointed himself prime minister following last July’s assassination of President Jovenel Moïse.

Henry, she says, is barely even recognised as a leader by his ‘own’ population:

He has never had any sort of constitutional authority and indeed, is implicated in Moïse’s assassination. The people he claims to speak for revile him. His only constituency is outside the country.

Racism underpins interventionist arguments around Haiti and elsewhere. This rhetoric always flows from an assumption of Western superiority over people in the Global South. It only flourishes where people cannot make the links between colonialism and the current state of affairs in a given country.

Haiti is in crisis, certainly. But its crises stem from hundreds of years of colonialism and military interference. We must ask if more of the same will solve the problem. There is a lesson to be learned from former occupations like the one being suggested here. If the US Marines ‘liberate’ or ‘stabilise’ a country, they generally end up running it afterwards.