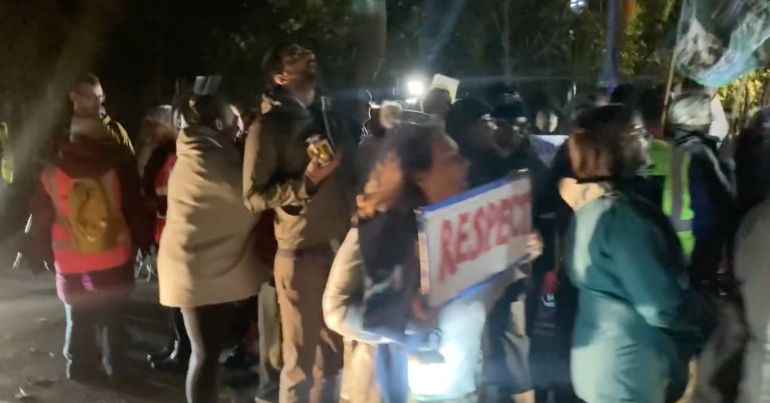 People are sharing harrowing reports of overcrowded, unsafe and inhumane conditions inside Manston detention centre in Kent. Migrant solidarity groups are organising protests in support of detainees which are due to take place on Sunday 6 November.

On 31 November, MPs questioned home secretary Suella Braverman on whether she ignored legal advice and refused hotel bookings for migrants in Manston. The Home Office built the detention centre on a former military base in Kent. According to Morning Star reporter Bethany Rielly, the Home Office has instituted a military presence on site.

The Home Office is only supposed to hold people on the site for up to 24 hours. However, a prison watchdog warned that authorities are detaining people on the site for a much longer period, without beds, proper healthcare, or access to fresh air and exercise. The watchdog noted reports of cases of contagious diseases such as scabies, diphtheria and MRSA within the centre.

Grassroots migrant solidarity group SOAS Detainee Support visited the site on 31 October and reported witnessing “inhumane and overcrowded conditions”. Indeed, the site is dramatically over capacity. According to SOAS Detainee Support, Manston is hosting over 4,000 people, including children. However, it only has capacity for 1,000 people.

The group witnessed families sleeping on the floor for weeks on end and children crying for help. And although it’s unlawful for authorities to confiscate asylum-seekers’ phones,  SOAS Detainee Support says that authorities have confiscated the mobile phones of detainees and denied them access to lawyers.

Through one of the gated entrances to the camp, we saw a father walking around with his faughter inside a cage, unable to leave.

And we saw piles of blue bags containing the belongings confiscated from the detained people upon arrival. pic.twitter.com/ImcDX55nwL

Meanwhile, Stop Deportations shared the following, documenting the wristbands that people detained within Manston are forced to wear:

People held in Manston are tagged with identification codes on their wrists. Belongings confiscated. Families and children detained for weeks, sleeping on floors in overcrowded tents. Diseases spreading.

This is a concentration camp.

Free them all, now. pic.twitter.com/A5xizxF18K

SOAS Detainee Support noted that this use of identification tags is “a chilling hallmark of internment camps throughout history”.

Writer and migrant and refugee rights campaigner Benny Hunter shared a photo of a letter thrown to the media by a child held inside Manston. Calling for urgent help, the letter claims that pregnant and unwell people inside the centre aren’t receiving the healthcare they need:

A young girl detained in Manston threw this letter over the fence to a PA news agency photographer today.

“We are in a difficult life now … we fill like we’re in prison…some of us very sick … ther’s some women’s that are pregnant…We really need your help. Please help us." pic.twitter.com/FX8DShhjpy

On 1 November, home secretary Suella Braverman told parliament that there’s an “invasion on our southern coast“. This was in reference to people making dangerous channel crossings seeking safety in the UK. She made this callous and divisive remark the day after a man fire-bombed a migrant detention centre in Dover, injuring two people. Highlighting that racist and xenophobic violence doesn’t happen in a vacuum, writer Taj Ali shared:

It's a damning indictment of our country that we have a Home Secretary openly fanning the flames of bigotry and contributing to a growing climate of hate against people fleeing war and persecution. Unbelievably grim.

Meanwhile, also on 1 November, the Home Office abandoned a group of people in central London after evacuating them from the Manston holding site. Authorities left the group of around 50 asylum seekers in a street outside Victoria station. They were stranded overnight without food, accommodation or warm clothing. Responding to the news, Zoe Gardner, who works in policy and research for the European Network on Statelessness, tweeted:

Unthinkable. Packing refugees onto buses & dumping them on the street in London, injured from conditions at Manston.

Thank God for @UnderOneSkyUK volunteers who helped them, showing the kindness that truly represents the UK.

We have to get this whole government out. #r4today

These incidents reveal the violent and oppressive nature of the border regime. It seeks to criminalise, scapegoat and dehumanise those seeking safety. Meanwhile, the individuals and institutions that are actually responsible for the crises we face amass wealth and power.

People gathered outside the gates of the detention centre in Manston on 2 November, in solidarity with those held inside. BBC reporter Simon Jones shared footage of protesters singing “we are all human, we all deserve respect”:

Protesters are now blocking the entrance to the Manston site. pic.twitter.com/7uX1LXnKui

According to Jones, while protesters blocked the detention centre’s entrance, others delivered toys for the children locked inside.

Action Against Detention and Deportations, a coalition of anti-border groups, is leading a protest in solidarity with those inside Manston on Sunday 6 November:

We will be returning to Manston detention camp this *Sunday 6th November at 2pm* to show solidarity with the thousands detained in horrific conditions, and to demand their freedom. Join us!

The group is arranging travel to the detention site from London. Those who can’t make it on the day are invited to contribute towards travel costs.

Migrant solidarity groups are also seeking mobile phone donations to give to those locked inside Manston. The devices are urgently needed in order to contact lawyers and family members. Sharing information on how to contribute to the phone drive, grassroots group Lesbians and Gays Support the Migrants tweeted:

📢The people detained in Manston are having their phones confiscated, and refused the ability to communicate with the outside world. We have to try to change this.
📱If you can donate a phone by dropoff or post, please get in touch with [email protected] for details

Meanwhile, No Borders Manchester is leading a solidarity protest in the Northwest:

Contact [email protected] if you have questions about attending!

NO ONE IS FREE UNTIL WE ALL ARE. pic.twitter.com/H9K3Sq2dQW

As always, those exercising their right to protest on Sunday should come prepared. Civil liberties organisation Liberty shared:

If you're protesting this weekend:

📲SAVE these legal advice cards
📡SHARE with other protesters
🖊️WRITE phone numbers on your arm
🦺FIND Legal Observers for assistance pic.twitter.com/7To7Pkxnae

Those who are unable to make it to the protests on Sunday can still get involved by contributing towards travel costs and the phone drive. You can also support the work of grassroots groups resisting borders and migrant oppression. These include Lesbians and Gays Support the Migrants, Stop Deportations, Kent Refugee Action Network and the Anti Raids Network.

This goes beyond Marston. This is about challenging the entire inhumane border regime which surveils, polices, detains, deports and dehumanises people seeking safety in the UK and globally.