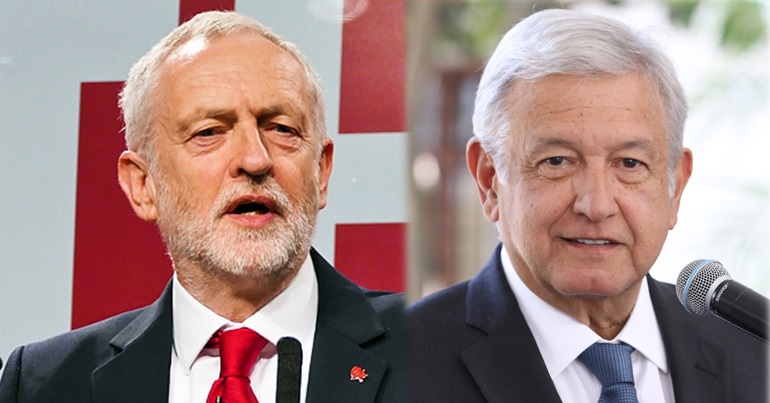 Centre-left politician Andrés Manuel López Obrador won an overwhelming victory against neoliberal elites on 1 July. And his presidency looks set to be the most progressive in Mexico’s recent history.

Over in Britain, Labour Party leader Jeremy Corbyn was one of the first to congratulate Mexico’s new president:

Congratulations @lopezobrador_. His election as President with more than 50% of the vote offers the poor and marginalised a genuine voice for the first time in Mexico's modern history.

I'm sure #AMLO will be a president for all Mexicans. pic.twitter.com/UE7oCDy4pP

And Corbyn’s right. López Obrador (aka ‘AMLO’) is very much offering a ‘new beginning’ to Latin America’s second-biggest economy.

A “historic” victory against neoliberalism

Amid state violence and corruption, “staggeringly high” income inequality, and unpopular neoliberal economic policies, many Mexican citizens are desperate for change. And voters overwhelmingly opted for AMLO on 1 July as the one to bring that change. An official quick count gave him around 53% of the votes – with his nearest opponent on just 22%.

Mexico’s political establishment has embraced neoliberal economic policies since the 1980s. And as the Guardian says, this “put an end to the prior period of growth and development”, and was consolidated by the North American Free Trade Agreement (NAFTA). The paper insists that “Mexico’s growth has been weak since the ‘free trade’ deal was signed, and it missed out on the region’s poverty reduction”.

This context is why much of the media is hailing AMLO’s centre-left electoral victory as a “historic” event for Mexico.

Commentators have compared AMLO to numerous left-wing politicians, including Jeremy Corbyn. And the Times has even called him “Corbyn’s twin”.

As Corbyn’s congratulatory tweet suggests, he has faith that AMLO will be “a genuine voice” for “poor and marginalised” people in Mexico. And Corbyn’s friendship with AMLO is no secret. The Labour leader has a long record of taking a stand on Mexican human rights issues, and he met with AMLO at Christmas 2016:

Like Corbyn, many see AMLO as a critic of neoliberalism. And speaking after his victory, the new Mexican president said [Spanish] “for the good of everyone, the poor come first”. Powerful Mexican companies had even told [paywall] people not to vote for AMLO in the run-up to the election.

AMLO has also promised a new, more peaceful approach to the country’s disastrous drug war. Over a decade on from a deadly military escalation, at least 200,000 people are dead and roughly 30,000 missing. And by addressing the poverty at the root of the drug trade, AMLO says he will “achieve peace and end the war” – insisting that “you can’t fight fire with fire”.

As openDemocracy has highlighted, AMLO’s political coalition represents “soft Keynesianism [see here] with some of the characteristic features of social democracy”. It also aims to tackle poverty and inequality, while reducing the wages of top government officials as a means to “end corruption”.

Unlike Corbyn, however, AMLO has promised not to undertake nationalisations as president – though he has promised to review dodgy privatisation deals.

Another reason why Mexico’s election was so historic

The Mexican election was also historic for another reason, though. Because according to one risk analysis firm, 132 politicians were killed in the nine months preceding the election. The Times called [paywall] it “Mexico’s bloodiest election”. And Amnesty International labelled it “the most violent election process in its history”.

Indeed, Mexico saw yet another journalist murdered just before the elections, with the UN fearing [Spanish] that 2018 is becoming “one of the most tragic [years] for the history of journalism” in the country. Mexico is one of the most difficult and dangerous places in the world to be a journalist. And in its 2017 World Press Freedom Index, Reporters Without Borders placed the country at number 147 (out of 180 countries). The Committee to Protect Journalists, meanwhile, said the number of reporters murdered in 2017 “reached a historical high”, insisting that “Away from conflict zones, Mexico was the deadliest country”.

There is real cause to celebrate AMLO’s victory in Mexico, though. Because he offers a different strategy to deal with the country’s difficult political and economic situations; an alternative to decades of right-wing failures. And over 50% of Mexican voters clearly think he’s up to the challenge.

– See more on the human rights situation in Mexico from Amnesty International. And read more in particular about the notorious Ayotzinapa case.