VIDEO: US Congress welcomes an actual fascist as neo-Nazi violence rages in Ukraine - The Canary 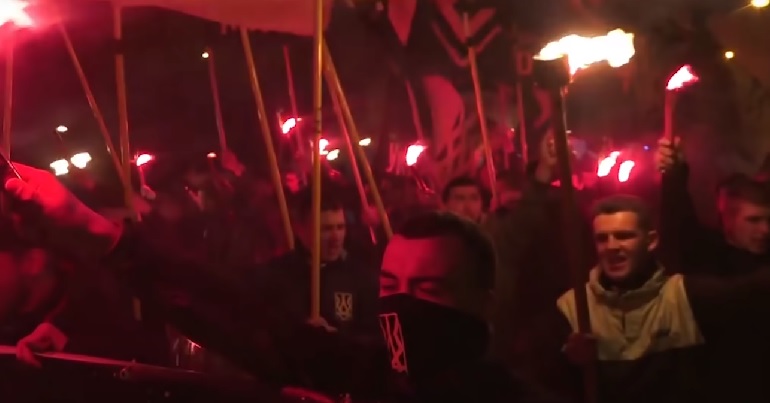 Award-winning journalist Max Blumenthal asked the Washington hosts of Andriy Parubiy, the speaker of Ukraine’s parliament and founder of two neo-Nazi parties, why they were legitimizing an open fascist at the heart of the extremism plaguing his country. This article appeared originally on the Gray Zone.

US Congress meets far-right leader amid ongoing violence in Ukraine

While racist violence raged through Ukraine, punctuated by a wave of attacks on Roma encampments by the state-funded C14 neo-Nazi militia, US Congress played host to an actual Ukrainian fascist. He was Andriy Parubiy; and besides being the proud founder of two Nazi-like parties — the Social National Party and the Patriot of Ukraine — he was the speaker of Ukraine’s parliament.

During a meeting hosted by the American Foreign Policy Council inside the Senate, I seized the chance to ask Parubiy’s hosts why they were welcoming a figure who was so central to the extremism overtaking Ukrainian society. I also put the question to Michael Carpenter, a former Pentagon official who helped deepen the US relationship with post-coup Ukraine during the Obama administration.

The responses I received reflected a semi-official policy of denying the very existence of Ukraine’s far-right plague in order to turn the heat up on Moscow.

Watch my exchange in the video report below, which I co-produced with Thomas Hedges:

The Ukrainian lawmaker appeared on a panel alongside fellow speakers of Eastern European parliaments eager to join the US-NATO crusade against Russia in exchange for handsome aid packages. At the top of the agenda was stopping the Nord Stream 2 pipeline between Russia and Germany, a project viewed in Washington as an existential threat to US economic leverage over Europe.

Earlier in the day, Parubiy held private discussions with the Republican Speaker of the House, Paul Ryan, and enjoyed what Under Secretary of State for Arms Control Andrea Thomson described as an “excellent meeting” with a “proactive” leader.

Parubiy’s first meeting with Ryan, which Ben Norton covered for the Grayzone last June, was also treated as business as usual, without a single protest or critical word from the Beltway press in Washington DC.

– See the original article and more from Max Blumenthal at the Gray Zone.