In brilliant defiance of an oppressive law, women have risked arrest by dancing in the streets - Canary 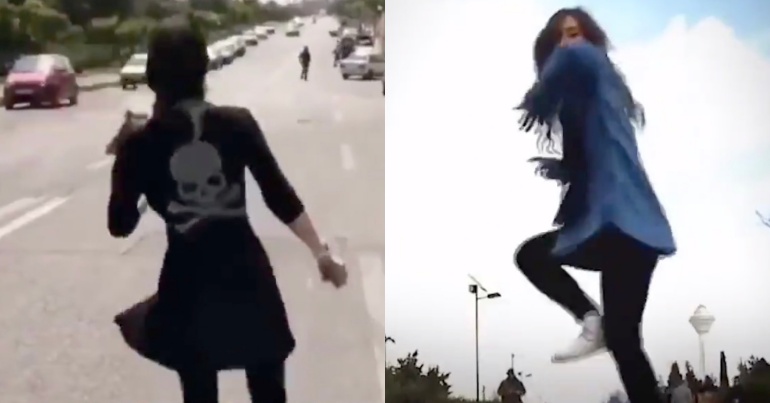 Women in Iran have risked arrest to dance in public on the streets. In a brave act of peaceful defiance, they’ve stood up to the so-called ‘morality police‘, and the harsh laws imposed on Iranian women.

Dancing in the streets

Women are posting videos and ‘sharing their acts of rebellion’ on social media. But dancing in public spaces with a loose hijab (so their hair can be seen) could see them face legal action. Because it’s against the law for grown women (any female older than nine) to dance before people who aren’t their husbands.

Despite this, the women’s dances are defiant, compelling and beautiful:

Brave women dancing in the street and walking without #hijab in #Iran where both are illegal. pic.twitter.com/yEcDD5TC9w

“If I can’t dance, I don’t want to be part of your revolution”

These women are dancing in an open act of rebellion. The human rights situation in Iran is, as Human Rights Watch says, “dire”. Iranian President Hassan Rouhani was re-elected in 2017 and promised to reform strict dress codes that have been in place since 1979. But this hasn’t happened.

On 27 December 2017, Vida Movahed was arrested after removing her Hijab and waving it as “as a flag of freedom for women”.

The Iranian authorities must immediately & unconditionally release a woman arrested on 27 December in Tehran for engaging in a peaceful protest against compulsory veiling. #Where_Is_She?
#دختر_خیابان_انقلاب_کجاست https://t.co/CHp5fos4zt pic.twitter.com/IjWSdP1fGQ

In February, 29 women – who waved hijabs whilst standing on phone boxes – were arrested. Many of these women are still in jail facing harsh prison sentences.

US-based journalist and activist Masih Alinejad told the Guardian in early 2018 that, according to an Iranian police announcement back in 2014, nearly 3.6 million women had been “warned, arrested or sent to court” because of “having bad hijab”. And in April, footage also emerged of a young woman who was slapped and wrestled to the floor by Iranian “morality police”. Her only ‘crime’ was wearing a loose hijab that showed some hair.

The actions of these women are especially brave when we consider that, according to Reporters Without Borders, Iran is one of the “five biggest prisons” for journalists and internet activists.

If I can’t dance, I don’t want to be part of your revolution.

And the dancing Iranian women have taken this quote to a new level.

This is not about ongoing Western attempts to destabilise Iran. It’s about basic human rights and the supression of women’s freedom. And rather than turning to violence, they are using peaceful civil disobedience – and social media – to demand their rights. That’s a bold move that we can all get behind.

– Read more about Iran from The Canary.