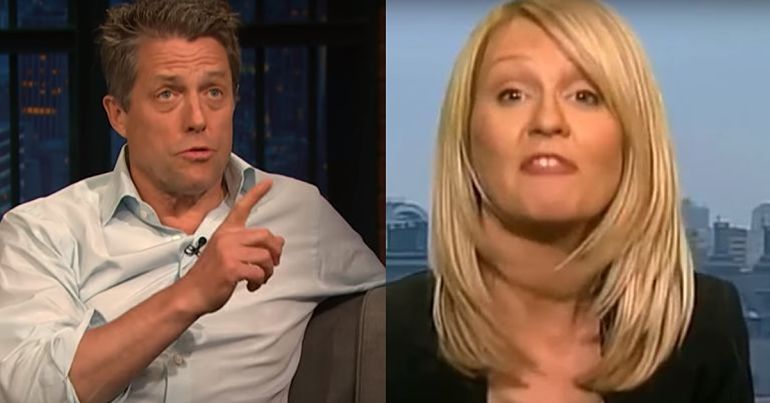 English actor Hugh Grant seems to have channelled his inner Danny Dyer, delivering a brutal attack on the Department for Work and Pensions (DWP) and the government as a whole:

First is the worst

This puts May’s government ahead of some stiff competition:

And after Thatchers government, that’s saying something

To justify his conclusion, Grant refers to an article posted on Life of a Universal Credit Sufferer, a blog written by Universal Credit (UC) claimant Alex Tiffin. The article criticises work and pensions secretary Esther McVey. Tiffin also draws on the findings of the National Audit Office’s report into UC to conclude that the DWP’s:

position that Universal Credit is changing lives for the better is no longer sustainable, nor has it it been for a long time. The only difference now is, that people have seen proof of its hostile and harmful effects and are speaking out against it.

This analysis rang true for many:

i too feel the shame of being on this scam governments UC. with kids and working 21 hrs a week having 63p deducted make me feel like scum and depressed. I wish for a 40 hr week full time so i can basicaly say FU and come off of it and get my own place again.

I recently discovered a friend had to use a food bank and very nearly lost his tenancy due to this utter shittery that is Universal Credit.

Others, meanwhile, shared truly heart-breaking tales of the effect of the DWP’s flagship policy:

The most heart breaking Facebook post I read in years – imagine your mum dying and watching her struggle with the fact the Tories want her to work in her dying days pic.twitter.com/SRWCQl5IML

She's just about pushed me over the edge. I can barely afford to feed myself, clothe myself and keep myself warm. I literally have to beg for help They're deliberately culling people like me & it's working.

Tiffin is very critical of McVey’s commitment to UC:

Like Iain Duncan Smith, Esther McVey is shamelessly pushing forward with the reforms without a care for anyone but herself.

He also lays into her for gloating about going out for breakfast. But one Twitter user claimed it comes with the job:

McVile trying to keep up with her bilious mentor, the architect of death, Iain Duncan Smith & his £35 breakfast.

Duncan Smith once tried to claim a £39 breakfast on expenses, leading to accusations he was “living in a different world”. Yet he seems to have passed the notion of ‘do as I say, not as I do’ onto McVey.

Arranged for caseworker to travel to London today to join me at long arranged meeting to discuss constituency DWP cases with @EstherMcVey1. 6am today caseworker gets email from Esther's office saying she's not allowed to attend. Not impressed.

He went on to wonder what would happen to McVey if she was subject to her own draconian laws:

Senior caseworker arrives London, gets message from senior exec officer to parly private secretary to @EstherMcVey1 cancelling meeting she travelled to London specially for “due to appointments in Sec of State’s diary being moved”.

Try that excuse when missing a PIP interview. https://t.co/k695flzgWJ

Overall, people concluded that Grant hit the nail on the head:

The United Nations have it right with this regime #NastyParty

And some can only envisage it getting worse:

I'd say they are not done yet. Every day they are trying to plumb new depths.

Let’s hope the bouquet has been thrown at this government’s fourth wedding, with its funeral just around the corner.