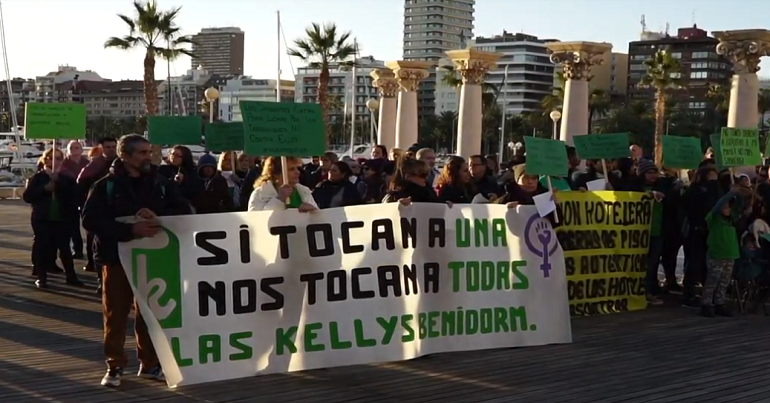 Chambermaids in Spain are organising themselves in a bid to combat declining work conditions and exploitation in the tourism industry.

A call for booking websites to join the fight

The activists – who are known as ‘Las Kellys‘ – are now calling upon booking websites such as TripAdvisor to assist them. They propose rating hotels on employment practices.

Hotels offering decent wages and conditions would be given an official seal of approval by the organisation.

A Guardian article asked TripAdvisor to comment, but did not receive a response.

The recent erosion in rights and wages has been attributed to labour market reforms adopted in 2012 by then prime minister Mariano Rajoy‘s conservative Popular Party government.

Rajoy’s measures created open-ended contracts and allowed dismissal without justification during the first year of employment.

As a result, Spanish chambermaids have seen their wages cut dramatically, with hotels outsourcing cleaning services instead of directly employing cleaning staff.

Ángela Muñoz, spokesperson for Las Kellys, said [Spanish] they “have to work without gloves” for up to ten hours a day “without time to eat”. They also have to clean “up to 28 rooms per shift” and, if they complain, they are told that “there are 14 others waiting to take our place”. They get roughly €2.30 per room.

Responding to the Guardian article on the subject, Twitter users pointed out both their appreciation for Las Kellys and ways to help:

That’s why I always leave a tip. When a room costs, say, £80-100 a night – the least you can do is leave a fiver or equivalent. And campaign for unionisation. Without that, here and in Spain, they will continue to be abused. Good idea. Ethics applies down the supply chain.

We are so impressed by the drive and determination of these women. Las Kellys (from 'las que limpian', 'those who clean') are taking their fight for fair wages for hotel cleaners to the industry and beyond. #sipodemos #responsibletourism #laskellys 💪https://t.co/BK7Uy2XFSE

Thank you!One way to collaborate with us is to ask @tripadvisor to warn about the hotels respecting upon the worker's rights,so that anyone gets a warrant before they are allowed to search any room.The Kellys wish to give visibility to those #hotels meeting such labour conditions

The conditions that chambermaids face is taking a serious toll on their health, according to the Guardian. Many of them reportedly suffer from chronic back pain and arthritis, having to depend on painkillers to get them through shifts.

Often, those employed in the hotel cleaning trade are female [pdf] and from vulnerable social groups such as single mothers and immigrants, making them less likely to complain about poor working conditions.

In recent months, though, the organisation has gathered momentum. Dressed in their trademark green T-shirts, they have managed to galvanise hotel workers around Spain.

Taking their fight to booking websites and encouraging hotel users to rate hotels based on how cleaning staff are treated may very well lead the activists to success.

– Name and shame hotels that do not pay cleaners fairly on TripAdvisor.