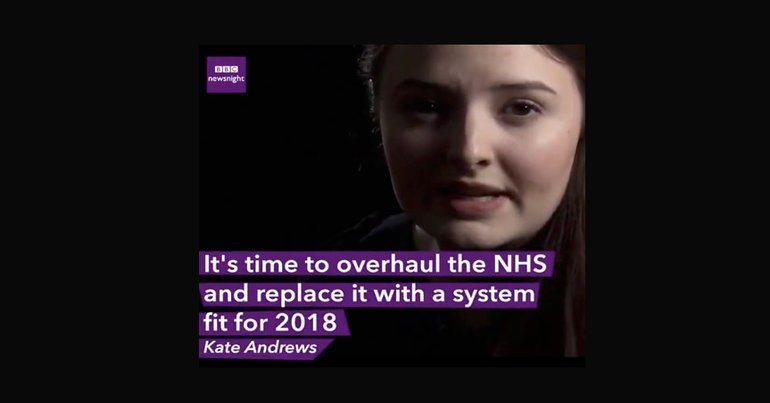 BBC Newsnight‘s #viewsnight series last night featured a call by Kate Andrews to scrap the current NHS. But the BBC failed to inform viewers that Andrews, a member of the hard-right Institute of Economic Affairs, has a vested interest in privatising the health service. Worse, this isn’t even the first time the BBC has done this.

“It’s time to overhaul the NHS and replace it with a system fit for 2018,” Kate Andrews told BBC Newsnight viewers on Monday 2 July 2018:

“It’s time to overhaul the NHS and replace it with a system fit for 2018” – Kate Andrews argues that the NHS’s “sacred status” prevents much-needed reforms.@KateAndrs | #newsnight pic.twitter.com/tCpVZ446pO

The BBC failed to inform its viewers that Kate Andrews is a prominent lobbyist for private healthcare companies. Andrews is currently news editor for the Institute of Economic Affairs, a hard-right thinktank which promotes the shrinking of the welfare state. Before that, she was with the equally hard-right Adam Smith Institute. As a spokesperson for Republicans Overseas UK, it was Andrews’ job to sell the ideology of the US Republican Party to Britain. And everyone knows how the Republican Party feels about taxpayer-funded healthcare.

The BBC has form in this area. In February last year, BBC Newsnight featured a segment on the NHS in which cancer specialist Dr Karol Sikora called the health service “the last bastion of communism”:

Sikora is the medical director of private health firm Proton Partners Ltd, based in the tax haven of the Bahamas. He took part in a series of anti-NHS attack ads for the US Republican Party aimed at killing off President Obama’s healthcare plans. In the videos, it’s claimed that NHS rationing boards routinely deny life-saving care to vulnerable British patients:

This is lobbying. And rather than learning from the Sikora incident, the BBC has repeated the same failure.

As openDemocracy editor Adam Ramsay pointed out, the BBC appears to be breaching its own conflict of interest guidelines, which state that:

Hi @BBCNewsnight, did you ask @KateAndrs whether her salary is funded by private healthcare companies?

Because if not, you’re breaking your own conflict of interest rules by promoting corporate lobbyists without telling the audience who their clients are. https://t.co/ic2lWZaXGl

In case @BBCNewsnight is unfamiliar with its own rules, there are many relevant bits and pieces here. https://t.co/cV7D81buqF pic.twitter.com/pcn0fxsZgs

It’s now on licence-fee payers to hold the BBC to account for this failure. Because permitting airtime to a corporate lobbyist to undermine the NHS, without revealing this conflict of interest, is simply unacceptable.

– You can send your complaint to the BBC here.