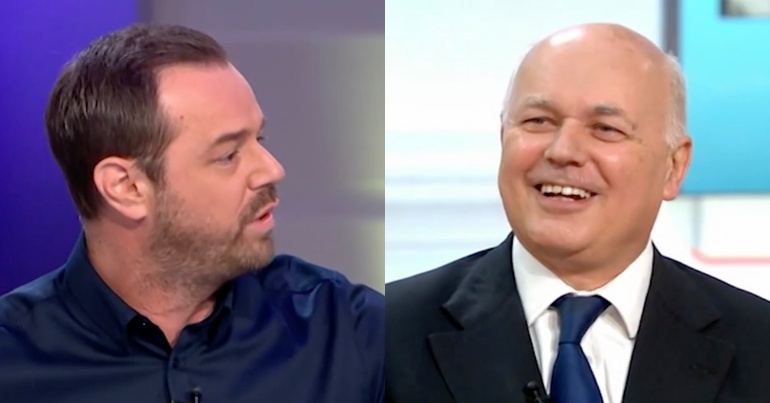 EastEnders star Danny Dyer perfectly captured the feelings of many when he questioned the “mad riddle” of Brexit. He also called former PM David Cameron a “twat“. But Dyer’s sharp analysis is the gift that keeps on giving as the Tories plunge further into Brexit chaos.

Iain Duncan Smith has now “kind of” agreed with Dyer’s comments. But he’d be foolish to assume this gives him any kind of kudos.

The former Conservative Party leader has some cross-party agreement on this. Because Jeremy Corbyn also said Dyer had “a special way” of saying things:

Jeremy Corbyn: "@MrDDyer has a special way of saying things… I like Danny Dyer a lot." pic.twitter.com/0LyIuDSJ9i

Vince Cable agreed too, and said Dyer had offered an “insight” into popular feeling:

Duncan Smith is a leading Brexiteer. And his comments on Good Morning Britain come as the Conservative cabinet is in chaos over Brexit

Theresa May has called the cabinet to discuss Brexit plans at Chequers on 6 July for what some MPs have dubbed a “body bag summit”. Because, as has been widely reported, ministers “have abandoned all pretence of unity” and are still “squabbling”.

Jacob Rees-Mogg turned on May and insisted [paywall] she “must stick to her ‘no deal is better than a bad deal’ mantra, or risk splitting the Conservative Party like Sir Robert Peel”. In response, several leading Tories turned on Rees-Mogg.

Now, as the Guardian reported, key business leaders have also stepped in and:

issued Theresa May with a list of Brexit demands after warning firms are losing patience over the lack of progress in talks with the EU.

Hey @theresa_may, remember this? It’s when you promised the country strong & stable leadership on Brexit and warned of a coalition of chaos.
Instead you’ve delivered a weak Gov’t, propped up by the DUP, riddled with division, prioritising Brextremists over the British people. https://t.co/V21a4bCv55

Duncan Smith’s comments only add to the chaos. And if he thinks that agreeing with Dyer gives him some kind of popular appeal, he should really think again.

When he was the work and pensions secretary, Duncan Smith’s key legacy was introducing Universal Credit (UC). Although he later called for a reversal of UC cuts, it was too late. Because while at the Department for Work and Pensions, Duncan Smith pushed ahead with UC despite clear warnings from his key advisors.

As the Guardian reported, he refused to listen:

When disabled people or charities pointed out the human cost, in suicides or food banks, not only did he not change course, he and his advisers smeared them with off-the-record briefings.

Dyer, in his autobiography, also presented an astute analysis of the current benefits system:

If you’re working forty hours a week and you can’t cover your bills, that ain’t your fault. It’s the fault of the slags paying you.

With the world being through the looking glass, maybe we shouldn’t be surprised if Danny Dyer is somehow the new political barometer.

But as Duncan Smith tries to jump on the Dyer bandwagon, it really doesn’t take much to imagine what the EastEnders star would call him if given the opportunity.