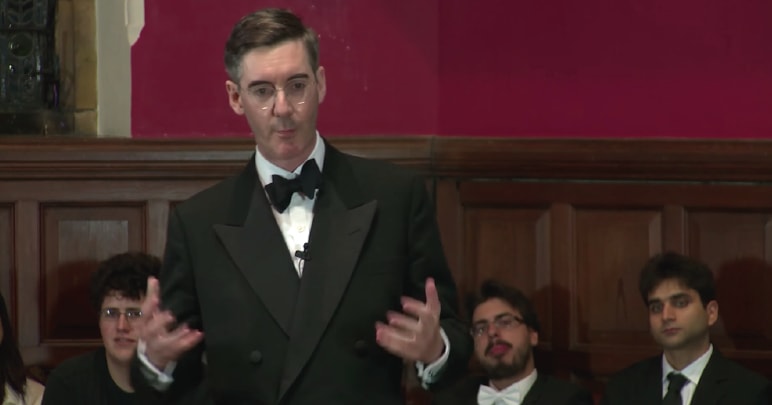 Jacob Rees-Mogg wrote an article for the Telegraph on 2 July. In it, he said [paywall] that Theresa May “must stick to her “no deal is better than a bad deal” mantra, or risk splitting the Conservative Party like Sir Robert Peel”.

In response, several of his Conservative peers have turned on him.

Theresa May must stand firm for what she herself has promised.

One former Tory leader, Sir Robert Peel, decided to break his manifesto pledge and passed legislation with the majority of his party voting the other way. This left the Conservatives out of office for 28 years. At least he did so for a policy that works.

At Chequers, [May] must stick to her righteous cause and deliver what she has said she would, she must use her undoubted grace to persevere.

The logic of his argument has been called into question. But more interestingly, it’s also come under attack from several Conservative MPs. These include Simon Hoare of North Dorset:

He’s simply wrong in his predictions. The hectoring nonsense / blackmail has to stop, the reality of parliamentary arithmetic dawn and the calamity of a Corbyn Government woken up to. Tories are common sense pragmatists NOT dogmatic vestal virgins https://t.co/kZ655wpMhA

The next Conservative to join in was a minister – namely Sir Alan Duncan, who’s a minister of state at the Foreign Office:

Rees-Mogg’s insolence @Telegraph in lecturing & threatening PM is just too much. Risks debasing govt, party, country & himself. PM must be given maximum latitude & backing. The ideological right are a minority despite their noise & should pipe down. #totalsupportforMay&UK https://t.co/H5YQjaEDSI

Another minister of state at the Foreign Office is Alistair Burt, who had earlier tweeted:

😳Enough. Just tired of this endless threat and counter threat. Why don’t we want the best for the U.K. than for our own ideological cliques? And there are others in this negotiation as far as I’m aware? https://t.co/bPL517qt3p

Richard Benyon of Newbury called for politicians at both extremes to give it a rest:

I think we would all benefit from a period of 🤫 from the ultras on both ends … https://t.co/rMSlaLVxxt

Nicholas Soames, MP for Mid Sussex, had a few things to say too:

A message for my old friend @Jacob_Rees_Mogg shut up #letthePMdoherjobwithoutthisconstantcarpingputasockinit

So let’s be clear :the Nation expects the PM and her Cabinet to come to a firm position on Brexit and to deliver the best arrangements that she can for our Country.If Members of her Cabinet don’t like it they shld leave #timetorisetothelevelofevents

And minister for business and industry Richard Harrington said:

I do wish people would stop putting their own dogma above the good of the country and the Party. We should all support the Prime Minister and the businesses that employ so many people in good jobs and export so much

No ‘mutineers’ cover from @Telegraph for the hard Brexiteers who are repeatedly threatening the PM unless she bends to their will. They should take note; there is no Parliamentary majority to just walk away and destroy business with a disastrous hard Brexit.

It’s turning into the Day of the Long Jibes

May is meeting with her ministers on Friday 6 July to discuss the government’s Brexit stance. Rather than coming together, though, the Conservatives seem to be pushing further apart. And if they can’t deliver on the single biggest issue this country faces, they should step aside for a government that can.