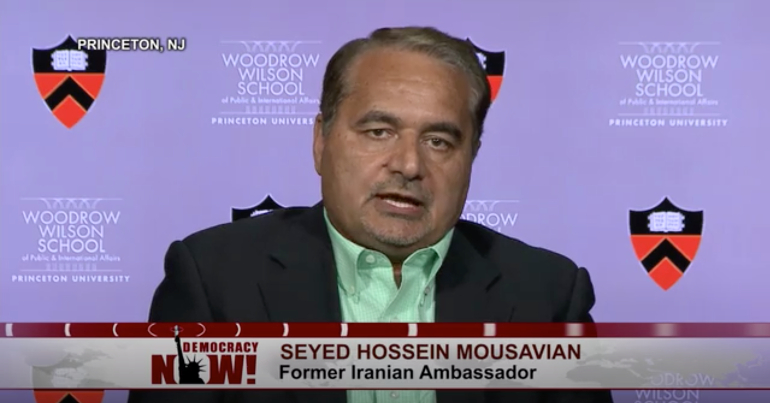 Since Donald Trump unilaterally pulled the US out of the Iran nuclear deal, it has become increasingly clear that the US is thoroughly isolated on the issue. All kinds of experts have been piling on the criticism. But now, a nuclear expert and former Iranian diplomat has gone so far as to describe the re-imposition of the sanctions as a “very dangerous” act of war.

Seyed Hossein Mousavian played a key role in the negotiations that led up to the Obama-era deal in 2015. He is now a nuclear policy specialist at Princeton University. And on 13 August, he spoke to Democracy Now! about the wider geopolitical dimensions of Trump’s withdrawal from the deal.

His verdict was damning. He said that Trump’s move has threatened Iran via:

Taken together, Mousavian said that these threats amount to an act of war. He stated:

Host Amy Goodman added that Bolton and Trump had also posted tweets containing threatening language towards Iran. And Mousavian noted that threatening other countries is against the UN Charter.

Mousavian also criticised US lobbying of other UN Security Council members to comply with the sanctions, saying:

This is bad, this is a big mistake, this is a violation of international law and regulations by the United Nations… This is really something unprecedented… and, at the same time, something very dangerous for international peace, order and security.

In spite of attempts by Trump administration representatives to coerce Washington’s European allies, there’s little indication that they’re heeding US calls to comply with the re-imposed sanctions. US ambassador to Britain Woody Johnson wrote a column in the Telegraph on 11 August calling on the UK to “stand with us” and reverse its decision to stand with its European neighbors in maintaining the deal. US ambassador to Germany Richard Grenell, meanwhile, claimed on Twitter on the same day that German businesses are “stopping their trade with Iran, complying with U.S. sanctions.”

And Trump himself has made threats against European allies should they not comply with the sanctions. He tweeted on 7 August:

We won’t let Washington dictate us with whom we can do business and we, therefore, stick to the Vienna Nuclear Agreement so that Iran cannot build atomic weapons.

There are indications that some European companies might back down. But there are also reports that the EU might itself sanction companies that comply. Nathalie Tocci, “an aide to EU foreign policy chief Federica Mogherini”, said last week during a BBC Radio 4 interview:

If E.U. companies abide by U.S. secondary sanctions they will, in turn, be sanctioned by the E.U.

In late July, Trump said during a press conference that he would talk to Iran without preconditions. But shortly after, Mike Pompeo walked back on this by adding a series of preconditions that Iran would have to meet.

There appears to be division among Iranian leaders on the issue of dialogue with the US. Reacting to Trump’s press conference statement, Iranian foreign ministry spokesman Bahram Qasemi said:

Sanctions and pressures are the exact opposite of dialogue… How can Trump prove to the Iranian nation that his comments of last night reflect a true intention for negotiation and have not been expressed for populist gains?

Iran’s supreme leader Ayatollah Ali Khamenei, meanwhile, said on 13 August: “Even if we ever –impossible as it is – negotiated with the US, it would never ever be with the current US administration.” But Iranian President Hassan Rouhani has expressed openness to the possibility. He said:

If the US government is willing, let’s start right now… If there is sincerity, Iran has always welcomed dialogue and negotiations.

During his Democracy Now! interview, Mousavian expressed profound scepticism that new negotiations would take place. The deal, he insisted, was multilateral – involving China, Russia, and several EU countries. But Trump has now broken the trust by violating the deal. And in the case of new negotiations, Mousavian asked:

Who can guarantee the next US president would not come and violate it?

In short, Trump has placed bravado above international law and diplomatic norms. And in doing so, he has shown yet again how completely unfit he is in temperament, judgement and character to lead a major world power.