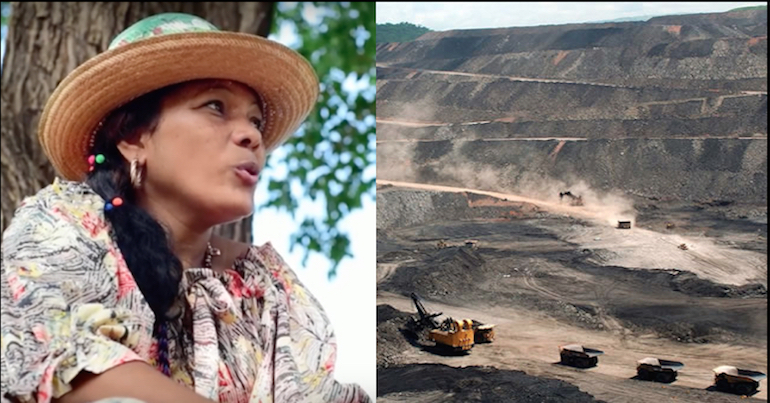 International consumption of coal from the Cerrejón coalmine in northern Colombia is destroying the local Wayúu community. Not only does Wayúu community leader Jakeline Romero Epiayu believe this, but it’s also borne out by the facts.

Epiayu is a member of the Force of Wayúu Women, which defends the rights of the Wayúu people. She told The Canary she wants “justice around how natural resources are used”. She also wants society to change its thinking on the demand for natural resources.

The Cerrejón coalmine in La Guajira is one of the world’s largest opencast mines. It began operations in 1985. The mine exports 32 million tonnes of coal per year. Multinationals BHP Billiton, Anglo-American and Glencore jointly own the mine.

The Colombian government and mining companies claim the mine benefits the region. But as mining takes over the land, it prevents local people from producing their own food. And in La Guajira, 27% of children under five suffer from malnutrition. Starvation has killed over 5,000 Wayúu children.

Agriculture, industry and commerce have also declined in production since mining began. And small farming communities had to move off their land to make way for the mine and its expansion.

The landscape of La Guajira is under threat too, as rivers disappear and 30% of the territory is at risk of becoming desert. Moreover, an increase in mining production hasn’t compensated for jobs losses in other sectors.

Ireland’s 12.5% corporation tax rate is low by international comparison. Yet despite this low rate, some corporations pay as little as 0.005%.

The Coal Marketing Company (CMC), which markets Cerrejon’s coal internationally, has an office in Dublin. BHP Billiton, Anglo-American and Glencore own CMC.

Ireland’s largest electricity generation station, meanwhile, burns Colombian coal. And two thirds of this coal come from the Cerrejón mine.

Solidarity in a dangerous climate

Speaking in Ireland during Latin America week, Epiayu is asking for solidarity from European countries for the Wayúu:

who are facing state violence, who are in constant struggle against a state that doesn’t recognise them

And this struggle can be fatal because of Colombia’s deplorable human rights record. Over 200 human rights defenders have died there since the 2016 peace agreement.

Epiayu told The Canary the Wayúu community has a simple message. It wants international mining companies to stop mining its territory. She said it wants “global justice” around the use of natural resources.

And her community also wants to see a “change in consciousness” and a change to the society model that demands mining. Because according to Epiayu, if this model doesn’t change, her community is “condemned to die slowly”.