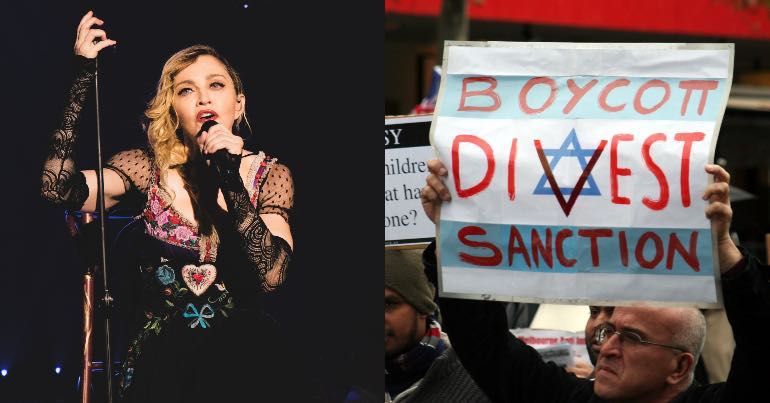 Activists have asked Madonna to pull out of her scheduled appearance at the Eurovision song contest in Israel. The Palestinian Campaign for the Academic and Cultural Boycott of Israel (PACBI) issued the call on its Twitter account. It comes after Madonna announced that she will perform at Eurovision. The song competition is due to be held in Tel Aviv on 18 May. The Boycott Divestment and Sanctions (BDS) movement had also previously asked people to boycott the competition. It said:

Israel is using Eurovision to art-wash its egregious crimes against the Palestinian people.

On Twitter, PACBI wrote directly to Madonna. It stated:

Palestinians hope that you will not undermine our struggle for freedom, justice and equality by performing at Eurovision in apartheid Tel Aviv.

And what’s more, it noted that the competition will take place on the “ruins of the ethnically-cleansed village of al-Shaykh Muwannis”.

PACBI also pointed out that many people have already promised to boycott Eurovision. It remarked that the boycott is:

supported by more than 100,000 people signing petitions, over 100 LGBTQIA groups, more than 20 Israeli artists, and hundreds of prominent international artists including the 1994 Eurovision winner.

It’s a chance for the whole of Europe who are involved in Eurovision to say, ‘Look, we don’t agree with this’.

The Canary has previously reported on why we should boycott Israel.

In closing, PACBI described Israel as having a “fanatic, far-right government”. It said this same government will “cynically exploit” Madonna’s performance. It will do this, PACBI argued, in order to

mask its deepening oppression of Palestinians.

As a result, PACBI along with Jewish Voice for Peace has also set up a petition. Together they argue that “There’s no neutrality in situations of injustice”. And, directed at Madonna, they wrote:

If you believe in equality and dignity for all, you will choose not to lend your star-power to the far-right Israeli government that is using Eurovision to cover up their continued human rights abuses.

Learn about the BDS movement.
The 2019 Eurovision Song Contest is scheduled to be held in Israel. Palestinians are calling for a boycott of the event. Learn how to support the campaign.