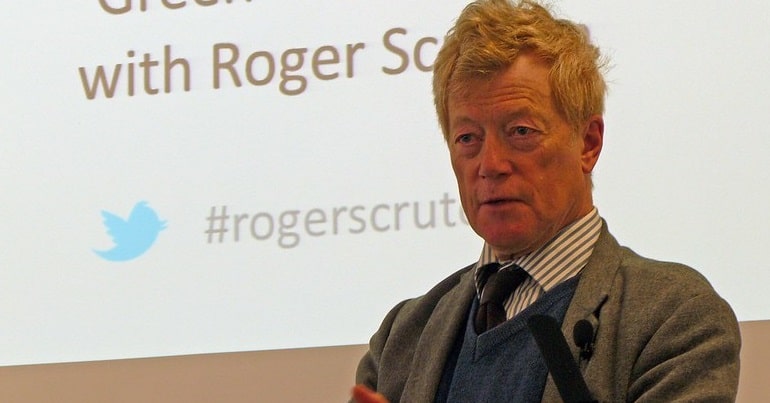 The corporate media has extensively covered accusations of antisemitism against the Labour Party. But now an adviser to Theresa May’s government stands accused of repeating ‘antisemitic’ claims, there’s little outrage from the traditional media.

Those who don’t believe it haven’t “observed the facts”

Scruton was defending his long-term friend, Viktor Orbán, arguing that claims Orbán is antisemitic are “nonsense”. But the Hungarian prime minister runs a far-right government that has consistently exploited antisemitic tropes to shore up support among xenophobes. This includes painting Jews as “money-grubbers”, seeking to celebrate World War II-era regents who presided over the murder of Jewish people and marginalising Jewish people to promote an exclusive Christian culture.

Scruton’s latest comments echo a 2014 lecture, where he said:

many of the Budapest intelligentsia are Jewish, and form part of the extensive networks around the Soros empire

And this is line with comments from Orbán, who stated in a speech:

They do not fight directly, but by stealth; they are not honourable, but unprincipled; they are not national, but international; they do not believe in work, but speculate with money; they have no homeland, but feel that the whole world is theirs. They are not generous, but vengeful, and always attack the heart.

Aside from the nature of Scruton’s comments, it’s worth noting that evidence suggests he may be prepared to make bad-faith claims. In 2002, Scruton asked Japan Tobacco International for a £1,000 pay rise on his monthly £4,500 fee for getting pro-smoking articles into major news organisations.

In his New Statesman interview, Scruton also reiterated his position that Islamophobia is a “propaganda word”:

In a party known for stoking racism, the Conservatives have recently faced renewed pressure to address the Islamophobia in their ranks.

They’re creating robots out of their own people… each Chinese person is a kind of replica of the next one and that is a very frightening thing.

Despite his long-held views, the Conservative government defended Scruton in November 2018. A spokesperson for the ministry of housing, communities and local government said:

Professor Sir Roger Scruton, as a longstanding public intellectual, has strong views on a number of issues. He received a knighthood in 2016 and advised the coalition government on design.

The traditional media has reported round-the-clock on allegations of antisemitism against Labour. Yet here we have May’s government adviser defending a regime that exploits antisemitic tropes, suggesting they are simply matters of fact. And Scruton himself claims there is an “extensive network” of Jewish people who are part of the “Soros empire” in Hungary. And still, there’s little coverage from the corporate media. This is very revealing.