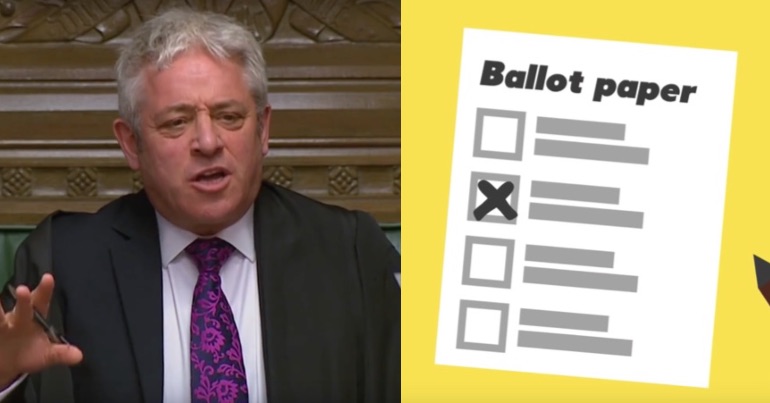 With endless Brexit debates, the public have had the opportunity to see how parliament operates like never before.

But one damning video demonstrates that ‘the mother of parliaments’ doesn’t even allow MPs to vote efficiently – especially when compared to the Scottish Parliament.

A waste of time

The Holyrood vote (electronic) is in real time.
The majority of the Westminster vote (archaic) had to be sped up by 1700%. pic.twitter.com/GwDMeQ2rSH

The difference in voting times between Westminster and Scotland is eye-opening. The vote shown in Holyrood clocks in at 1 minute and seven seconds. By contrast, the Westminster vote takes a full 19 minutes and 40 seconds.

Why such a difference?

This is because in the House of Commons, MPs have to physically leave the debating chamber. They then walk through ‘division lobbies’ where each vote is physically counted by ‘tellers’.

But the Scottish parliament uses an electronic voting system, where MSPs simply press a button. As the BBC described:

The Scottish Parliament, which was opened in 2004, features an electronic voting system which allows members to vote quickly and efficiently from their desks.

In the Holyrood chamber, each individual desk is equipped with a small computer console through which members can request to speak in debates, and vote at the end of them.

They have to insert their parliament pass into the computer to operate it, and when it comes to votes – conducted at what is known as “decision time” – there are buttons for them to either vote Yes, No, or Abstain.

Similar systems are also used in the Welsh Assembly, the European Parliament and other countries across the world.

But as Mackie asked at the end of her video:

In the 21st century, why does Westminster refuse to adopt electronic voting?

As part of speaker John Bercow’s reform agenda, Westminster established “the Speaker’s Commission on Digital Democracy”. And this specifically addressed electronic voting. You can read the full testimony given for and against the proposal here.

The commission’s final report determined that:

Our recommendation…would not affect this tradition of walking through division lobbies. We are simply recommending that MPs should use their smart identity cards to record their votes against card readers in the lobbies. This would produce an electronic record of how MPs have voted more quickly and accurately than under the current system.

This would mean MPs still physically walk to division lobbies to vote. And yet in the very next paragraph, the report acknowledged that:

In the long session of Parliament immediately after the 2010 election there were 544 divisions in the Commons. If three minutes had been saved on each one this would have added up to a time saving of 27 hours for each MP

This is an enormous amount of time. Time that could have been spent addressing important public policy issues. And worse yet, this is the figure if just three minutes were saved. In Mackie’s video, the Westminster parliament took over 19 minutes to vote compared to Holyrood’s one minute.

‘Tradition’ is the graveyard where democratic reform dies in the UK

Tradition is one excuse given for keeping the existing voting system. And yet even the unelected house of lords has trialled tablet-based system for votes. This despite the upper house being the ultimate expression of tradition triumphing over democratic principles.

The speaker’s commission justified the decision not to back electronic voting based upon the following flimsy excuse advanced by some MPs:

Members value the chance to meet Government Ministers and other MPs during votes, as this gives them an opportunity to raise important issues with one another.

This justification was also advanced by Conservative MP Alan Duncan in an article for PoliticsHome. Duncan dismissed electronic voting because:

The division lobbies allow conversations to take place, where an MP can flag a constituency case with a Minister or just interact with colleagues.

In effect, then, the division lobbies for MPs like Duncan are an opportunity for networking and socialising.

Duncan claimed that MPs voting electronically is “impossible” because:

the House of Commons… is made up of benches, not individual seats from which a Member could cast a vote

And he also claimed that MPs voting remotely instead would be “unworkable”.

Clearly this is nonsense. Especially as MPs have voted to spend £3.5bn on renovating the Palace of Westminster. And I’m sure for vastly less money a technological solution could be found, if the will is there to find one.

In his PoliticsHome piece, Duncan remarked:

Proponents of electronic voting use it as shorthand to argue for wholesale changes to the conventions and practices of a chamber they do not fully appreciate or understand.

And yes, he’s partly right, we do want wholesale changes. But he’s wrong that we don’t fully appreciate or understand the chamber. On the contrary, we understand it all too well. We understand that it’s a testament to outdated and absurd procedures that are allowed to exist long beyond their sell-by-date. And they’re allowed to continue because of blind allegiance to tradition, as opposed to reason.

Introducing electronic voting isn’t radical. Instead, it’s a small component of desperately needed democratic reform. But resistance to such moderate proposals highlights the struggles ahead if we wish to bring about truly radical changes to British democracy.