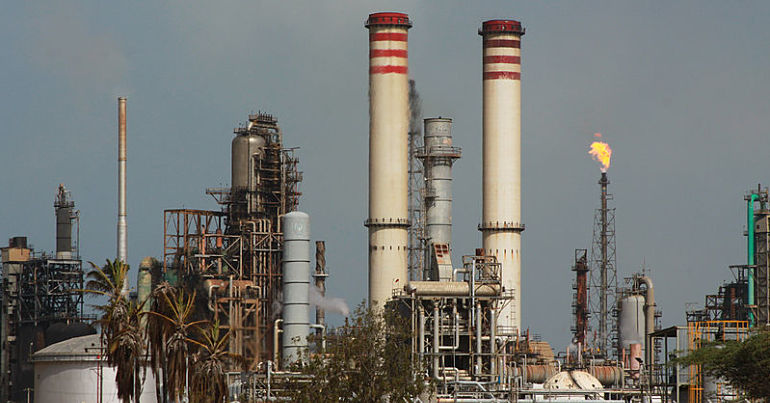 There should be no doubt that Venezuela’s current crisis revolves around oil. With the world’s largest proven oil reserves, Venezuela’s natural wealth has long been the envy of Western nations determined to grab a piece of the pie.

In this context, the latest coup for oil bluntly reveals that Western governments aren’t taking climate chaos remotely seriously. The tussle for Venezuela’s oil must also be understood within a wider global assault on the world’s poorest people.

If there’s something positive to be taken from the Donald Trump administration, it’s that US imperialism has once again become vulgar and blatant. In late January, US national security adviser John Bolton spelled out the connection between US intervention and Venezuela’s oil, saying:

It’ll make a big difference to the United States economically if we could have American oil companies really invest in and produce the oil capabilities in Venezuela.

Opposition leader Juan Guaidó, Washington’s man in Venezuela, currently heads efforts to turn the country’s oil over to Western hands. In the words of journalist Justin Podur, Guaidó is the product of “a neoliberal laboratory preparing for the theft of Venezuela’s economy”. This preparation goes back years and, headed by economist Ricardo Hausmann, involves “a plan to rebuild the nation, from economy to energy”. In other words, the US has been planning to take control of Venezuela’s oil wealth for some time.

And Guaidó seems under no delusions about his role within this situation. As journalist Ben Norton wrote on 28 January:

The right-wing opposition leader that the United States is trying to undemocratically install as Venezuela’s president immediately set his sights on the country’s state-owned oil company, which he is hoping to restructure and move toward privatization. He is also seeking money from the notorious International Monetary Fund (IMF) to fund his unelected government.

As declassified Foreign Office documents reveal, the 2003 invasion of Iraq was largely about “ensuring the free flow of Iraqi oil to world markets” and divvying up the spoils between Western multinationals.

The countries that contributed most to the war effort battled for the greater share of Iraq’s oil reserves. As the Chilcot inquiry showed, the “US and Britain wrangled over Iraq’s oil” after the war. A similar logic seems to be prevailing over Western intervention in Venezuela: those that contribute most to toppling the Venezuelan government can expect to inherit the lion’s share of the country’s natural wealth.

There is also a significant overlap between the ‘coalition of the willing‘ that followed the US into the invasion of Iraq and the countries supporting the ongoing coup attempt in Venezuela. And though most Venezuelans are under no illusions that history is repeating itself, many told The Canary during our recent visit to the country that they are determined to stop it becoming another Iraq, Afghanistan, or Libya.

The indisputable links between Western foreign policy and oil interests reveal that dealing with climate chaos is no priority for them. Capitalist plundering is far more important. While all evidence suggests we should divest from fossil fuels and switch to alternatives as soon as possible, the West continues intervening abroad to gain access to large oil reserves.

Oil-related imperialism and climate chaos are both part of a wider assault on the world’s poorest people. Our governments seem not only determined to steal their resources, but also the future of their children.

Our political leaders are ultimately competing to see who can fall off the cliff edge the richest. In this sense, the global battle against imperialism is now more important than ever.