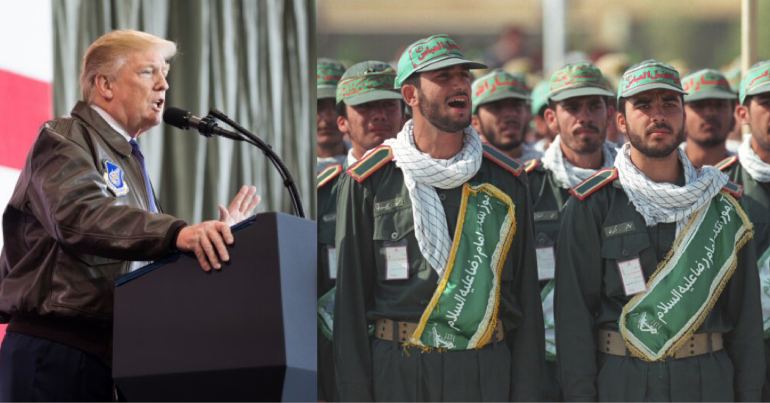 Donald Trump has just levelled a new punitive measure against Iran, which US allies have celebrated as a bold step. But this latest act of sabre-rattling is pure hypocrisy, as a look at US relations with other countries in the region shows.

On 8 April, Trump announced that the US will designate Iran’s army – the Islamic Revolutionary Guard Corps (IRGC) – a “foreign terrorist organization”. He claimed that “the IRGC actively participates in, finances, and promotes terrorism as a tool of statecraft”. The move comes as the one-year anniversary of his decision to pull out of the internationally-agreed nuclear deal with Iran approaches. Trump announced Washington’s unilateral withdrawal from the Obama-era agreement ­– in violation of international law – in May 2018 in spite of overwhelming opposition from Western European allies.

While further isolating Iran on the international stage, the decision will also add new sanctions on top of the already crippling measures implemented in 2018.

Iran’s human rights record is far from perfect. And the IRGC does have problems with issues like corruption. But that’s not the point. Because not only is this latest act of US aggression going to cause even more harm to Iran’s people – rather than its government –  it’s also brazenly hypocritical. And a look at Washington’s closest allies in the region illustrates that point perfectly.

The Israeli government of Benjamin Netanyahu, for instance, (which unsurprisingly praised Trump’s move) has been responsible for a brutal and protracted campaign of state terror in the Occupied Palestinian Territories. This record is too long to list fully, but includes ‘Operation Protective Edge’ in 2014 ­– in which Israeli forces murdered 1,462 Palestinian civilians, 495 of whom were children – and ‘Operation Cast Lead’ in 2008-9 – 764 civilians murdered, 344 of whom were children.

Then there’s the other close US ally in the region, Saudi Arabia. This oil-rich nation is an absolute dictatorship in which the monarch holds complete power and only minor local officials are elected. And on top of extensive internal human rights problems, the regime has also been waging a brutal war in Yemen which has created what the UN has called “the world’s worst humanitarian crisis”. Numerous acts committed in this campaign meet the definition of terrorism. For example, on 6 August 2018, the Saudi-led coalition dropped a bomb on a bus full of school children. The attack killed 40 of the children on board (aged between six and 11) along with 11 adults who were also on board. In the same month, coalition forces launched a similar bomb attack in which at least 20 civilians were killed while attending a wedding.

Not only has the US failed to impose any kind of punitive measure on Israel or Saudi Arabia for any of these atrocities, but both have also received generous funding from Washington; making the US complicit in what might constitute crimes against humanity. Israel has received billions of dollars in funding, for example. In spite of consistently violating international law through its occupation of Palestinian land, it is the largest cumulative recipient of US aid since the Second World War. The US is also a major supplier of arms to Israel, again making it complicit in the Israeli military’s crimes.

As for Saudi Arabia, the US has long been embroiled in business dealings with the Saudi monarchy. Trump no longer even hides the fact that Washington’s favorable treatment of Saudi Arabia is due to the beneficial economic relationships it has with the US. Not least of these is the huge amount of weapons it buys from US manufacturers. According to forensic analysis of the debris of the 2018 school bus attack, the bomb was probably sold to the Saudi-led coalition forces by the US; it was produced by notorious weapons company Lockheed Martin.

As The Canary has previously reported, the UK has also been complicit in selling weapons to both the Saudi dictatorship and Israel.

Flying in the face of even-handedness

Washington’s double standards fly in the face of any sense of even-handedness. As former UN special rapporteur for human rights Richard Falk told The Canary:

Trump’s disregard of international law and morality is most in evidence in relation to Iran and Israel. With Iran, no opportunity for provocation is ignored, while with Israel every outrage is affirmed, producing policies in both instances that defy near-universal consensus to avoid conflict with Iran and to create conditions for a political compromise between Israel and Palestine.

But this complicity with state terror is nothing new. For decades, US presidents of both parties have been backing and bankrolling some of the world’s worst human rights violators. The hypocrisy is also nothing new. A bipartisan senate bill introduced to congress in 2007, for example, urged then-president George W Bush to do exactly what Trump has just done in designating the IRGC as a foreign terrorist organization. And amongst the bill’s co-sponsors were then-senators Barack Obama and Hillary Clinton.

Both major US parties have long given their Saudi and Israeli allies unconditional support – no matter how outrageous their actions. Meanwhile, they treat adversaries like Iran with brazen unfairness – no matter how undeserving they might be. Far from standing up to terrorism in the Middle East, successive US administrations have instead pandered shamelessly to the very two states that are actually the region’s biggest terrorists.

Featured image via US Army and Farsi Khamenei/Wikimedia Commons