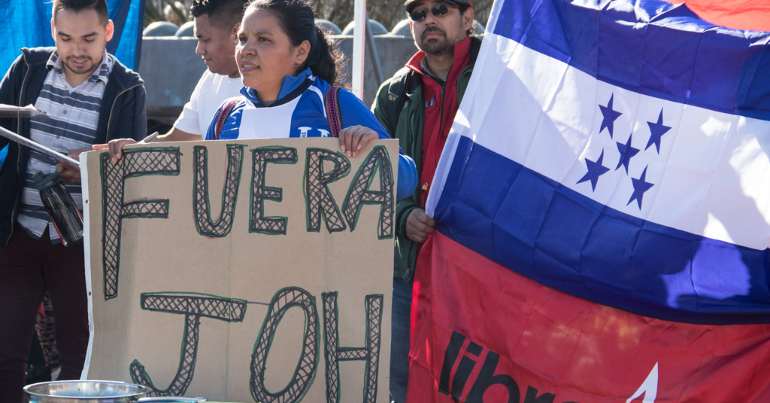 28 June 2019 marks the 10-year anniversary of the US-backed coup in Honduras that toppled the democratically elected government of Manuel Zelaya. The timing is apt. Because the Central American nation has seen extensive protests for around two months over the government’s privatization plans, which were set in motion by the 2009 coup.

That night ten years ago…

On 28 June 2009, armed men stormed Zelaya’s house in the middle of the night and led him away at gunpoint. His actions in office had rumbled the country’s ruling elites. He’d begun a process of resisting neoliberalism and embarked on a program of social spending and public investment. This was unacceptable to powerful interests both at home and abroad. His plan to convene a constituent assembly to rewrite the country’s outdated constitution, meanwhile, was a step too far; and these interests conspired to remove him.

With Zelaya’s government deposed, right-winger Roberto Micheletti temporarily became president. Years later, it emerged that Hillary Clinton, who at the time was serving as US secretary of state, played a hand in the coup. Washington, which has always sided with local elites across Latin America, wasn’t happy with Zelaya’s policies either and wanted a puppet regime in power to do its bidding. The state department, under Clinton’s instruction, helped to legitimize successive post-coup governments with propaganda campaigns to “scrub” their image.

In the aftermath of the coup, the country degenerated into an ever-worsening human rights nightmare. The homicide rate surged while state security forces embarked on a brutal campaign of torture and extrajudicial killings. Indigenous and environmental activists were a prime target, with Goldman Prize-winner Berta Cáceres amongst the notable figures gunned down.

Current president Juan Orlando Hernández won an election widely deemed fraudulent, including by the pro-Washington Organization of American States. The US, meanwhile, accepted the result without question. Because Hernández has been an obedient servant of the US empire.

In addition to keeping open the US military base Soto Cano, the Honduran regime has set about dismantling the social gains of the Zelaya era and reestablishing the neoliberal order. This all fits within a long history of Honduras kowtowing to Washington’s interests. Because for decades, Honduras served as a base for US power in Central America. During the Cold War, for instance, it played a key role in backing Washington’s favored military dictatorships in the region. It was also used as base to wage war on Nicaragua via the ‘Contras’, a notorious US-armed right-wing paramilitary force. The Contras received training in Honduras, including in methods of torture.

Many weeks of protests

In April 2019, however, Hernández moved to privatize the country’s pension, healthcare and education systems. And protests soon followed. Ordinary people rose up to resist this attack on their social security and standard of living. And as the month came to a close, demonstrators set fire to buildings. There were also violent clashes between state forces and protesters.

The protests continued. And on 25 June, authorities opened fire on a group of peaceful student protesters. In addition to calling for the reversal of the privatization proposals, protesters are now also calling for Hernández to step down. Washington, however, continues to firmly back his government.

Thousands of Honduran civilians, meanwhile, continue to flee the country each month.

In spite of the carnage, the protests in Honduras have received little coverage in the mainstream media. Only when protesters set fire to the US embassy in the nation’s capital did the corporate-owned press begin to pay attention. And naturally, these reports gave only a cursory glance at the causes of the unrest, focusing instead on repeating Washington talking points.

The comparison with the situation in Venezuela, meanwhile, is very revealing. Because Washington and its minions in the corporate press have been harping on endlessly about the purported crimes of Nicolás Maduro’s government. But they apply little to no scrutiny to the Honduran government, which is much less democratic than Venezuela’s.

The explanation for this is straightforward. Countries that serve Washington’s interests and follow the neoliberal economic policies that benefit corporate power are rewarded with support. Those that don’t are singled out for criticism, isolation, and even ‘regime change’ – as is currently being attempted in Venezuela. The mainstream media, overwhelmingly in the hands of large corporations and loyal to their interests, cheerleads US efforts to protect these interests around the globe.

Ten years on from the coup, we must keep calling out Washington’s cynical posturing and double standards, as well as the shameful role that the media plays in manufacturing consent.