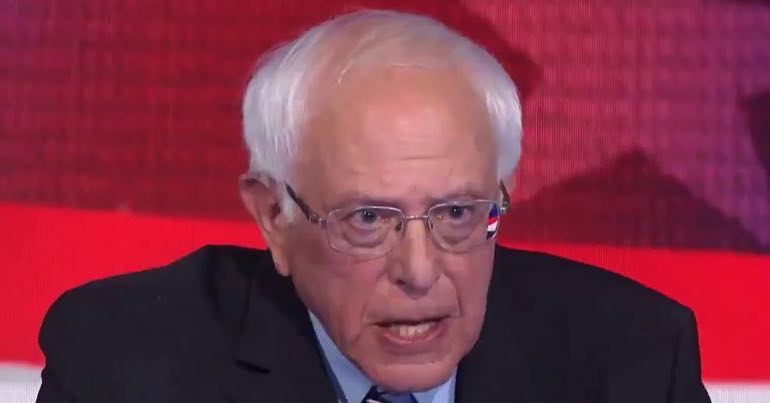 Bernie Sanders took aim at both the US war machine and climate catastrophe during the second Democratic Party debate on 28 June. Sanders insisted that, instead of spending obscene amounts of money on weapons, tackling climate catastrophe should be a key priority.

He also attacked the levels of poverty and inequality that exist in the US. And he argued that people must stand up and be counted if they want things to change.

Sanders slammed both US militarism and Washington’s lack of action on climate breakdown. He insisted that “instead of spending a trillion and a half dollars on weapons of destruction”, the real enemy is climate catastrophe. Calling it the “common enemy”, he went on to declare that the goal should be to:

transform the world’s energy system away from fossil fuel to energy efficiency and sustainable energy.

The world’s future, he said, “rests on us doing that”:

Take on the military industrial complex.

Sanders also laid out his history of anti-war activism. Unlike his fellow presidential hopeful Joe Biden, Sanders voted against the 2003 invasion of Iraq. He also revealed that he pushed to end US support of Saudi Arabia’s war on Yemen:

I helped lead the opposition to the Iraq War. Joe Biden voted for it. When we talk about foreign policy there is a very clear difference in this election. #DemDebate2 pic.twitter.com/OZBez3nYa2

Not stopping there, Sanders also proclaimed his opposition to a war with Iran. He asserted:

I will do everything I can to prevent a war with Iran which would be far worse than the disastrous war with Iraq.

Sanders went on to state that many people watching the debate probably believe that nothing changes in the US and wonder:

How come, for the last 45 years, wages have been stagnant for the middle class? How come we have the highest rate of childhood poverty? How come 45 million people still have student debt? How come three people own more wealth than the bottom half of America?

His answer was that:

nothing will change unless we have the guts to take on Wall Street, the insurance industry, the pharmaceutical industry, the military-industrial complex, and the fossil-fuel industry.

And if this doesn’t happen, he argued, the “rich will get richer” while everyone else struggles:

We must have the guts to take on:

If we can take them on, we will finally be able to create real change. #DemDebate2

As journalist and climate activist Naomi Klein pointed out, tackling climate breakdown “is not a solo climate policy”. It means taking on the wider issues which affect society:

1. Lots of these candidates claim they support a #GreenNewDeal but their performance in #DemDebates tells a very different story. GND is not a solo climate policy – it's a plan to transform the economy and its underlying values to wage war on climate breakdown + poverty/injustice

And as one commentator replied, supporting climate action and opposing war are very much two sides of the same coin:

Anyone claiming to support climate action and not saying a word about war is not serious #Bernie2020 https://t.co/coCByRUJin

Bernie Sanders showed during the debate that he understands this holistic approach. From his criticism of US militarism to his understanding of inequality in the US, he is head and shoulders above the likes of Biden.

If change is going to happen, Sanders becoming president would be a strong step in the right direction.