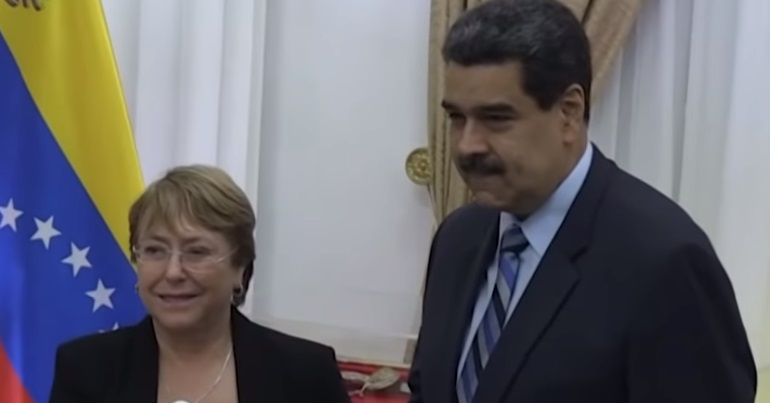 I am concerned that the sanctions imposed this year by the US on oil exports and gold trading are exacerbating and aggravating the pre-existing economic crisis.

This improves on a statement she made in March in which she only expressed concern that sanctions “may” be worsening the crisis. But her recent statement still falls well short of what needs to be said.

She should forcefully denounce US sanctions

Trump’s dramatic escalation of US sanctions in August 2017 had killed thousands of people in Venezuela by the end of 2018. A paper published in April by economists Mark Weisbrot and Jeffrey Sachs made that very clear. The sanctions were lethal before Trump made them even worse in 2019. But Bachelet said she was concerned only about the sanctions the US “imposed this year”.

US support for an insurrectionist opposition goes back to 2002. It was a big factor in causing Venezuela’s economic crisis. Under Trump, that support now includes threats of US military attack. US senator Marco Rubio is a major influence on Trump’s Venezuela policy. Rubio happily tweeted on 16 May that Venezuelan president Nicolás Maduro “can’t access funds to rebuild electric grid.” Obviously, the state of the electric grid is crucial to the wellbeing of all Venezuelans.

A credible human rights campaigner would pull no punches in denouncing US sanctions. UN special rapporteur Alfred De Zayas, who previously visited Venezuela, said US sanctions are “economic warfare” and that “sanctions kill”. Bachelet is not remotely as blunt.

Some improvements, but still failing

A mother whose young son, a Government supporter, was set on fire during the 2017 protests and spent 15 agonizing days in hospital before he died. A daughter whose father was killed for defending the rights of peasants to access land.

In another contrast to her statement in March, she acknowledged the government’s efforts to offset the impact of the crisis. She said:

The Government has launched projects in an effort to ensure universal access to social programmes, to which it has dedicated 75 percent of the national budget.

That exposes the depravity of Trump’s efforts to starve the government of revenues. But Bachelet still hasn’t found the courage to state the obvious.