The US 'strengthens military dictatorships', says president overthrown in US-backed coup - The Canary 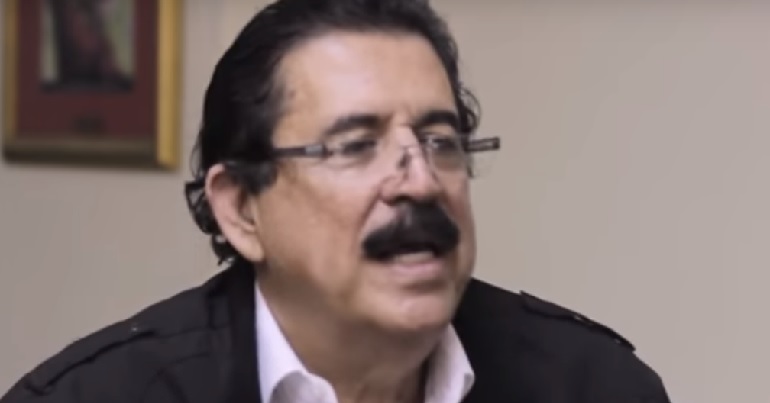 In a recent interview in the Grayzone, journalist Anya Parampil spoke with former Honduran president Manuel Zelaya about how the country has changed in the decade since a US-backed coup in 2009. In particular, he highlighted how the US policy of ‘strengthening military dictatorships’ pushes people to seek asylum in the US.

“Rupture of a social contract”

On 28 June 2009, a faction of the Honduran military entered then-president Zelaya’s house, forcing him onto a plane and into exile. The act violated the Honduran constitution, and was quickly condemned by various Latin American governments. But US secretary of state Hillary Clinton gave the coup Washington’s nod of approval, ushering in ten years of US-backed National Party governments.

That has been a sacrifice for the Honduran people, because the side that took power has had the support of the United States. The US is the major beneficiary of the coup. And there is a principle in penal law that says the beneficiary of a crime is the principal suspect.

He explained how the US had taken “almost complete control over Honduras” through international financial institutions, control of the media, and by funding Honduran non-governmental organisations (NGOs) which sway public opinion.

The coup “turned Honduras into hell”

Zelaya went on to explain what happened in the years after the coup. He said:

Poverty increased. There are more poor people. The poverty level [now] surpasses almost 70 percent of the population. Crime increased. Drug trafficking increased. According to a report from the US State Department, the drug trafficking in Honduras after the coup increased by almost double.

The large groups of Honduran people that flee to the US, Zelaya claimed, are evidence of the economic downturn caused by the coup:

The conversation then moved on to recent protests in Honduras, which have involved the burning of the US embassy in the capital, Tegucigalpa. The protests are widely understood as a response to economic desperation caused by public-asset stripping through privatisation, which itself is the culmination of the erosion of Honduran democracy.

Zelaya discussed the popularity of current president Juan Orlando Hernández (JOH) and how he has failed the country. He also pointed to his leadership style, saying:

I was president. And I walked in the streets. And people greeted me. And they told me, “Hi Mel! Hi President!”

In the years following the coup, corruption in Honduras has also flourished. In fact, some researchers claim that corruption in the country “has become not an individual and sporadic incident but rather the ‘operating system’ of the Honduran state”.

Zelaya spoke of corruption, and how wealth has been accumulated by a small group of business and political elites in Honduras:

The corruption is public. They broke the social security system. Look, how do you sustain an illegal government? Paying people off.

If they are legal, they don’t need to pay. Because they are the product of a social pact…

The US “strengthens military dictatorships”

Parampil then asked Zelaya “how central the interests of the US military are to what happened” in Honduras, and how “its presence in the country has grown” since 2009. He explained:

[Honduran] soldiers are trained at the [US] School of the Americas. All of their drills they do with the US. For the soldiers, the ideal of their life is to be like the US Marines, like the US soldiers.

And here, the US controls the armed forces and the police. They do what the US wants them to do. They are occupation forces.

And for Zelaya, Central American people fleeing to the US is significantly a product of US foreign intervention:

As corporate media outlets focus on pushing regime change in Venezuela, it’s well worth considering what they’re ignoring in Honduras – and why.