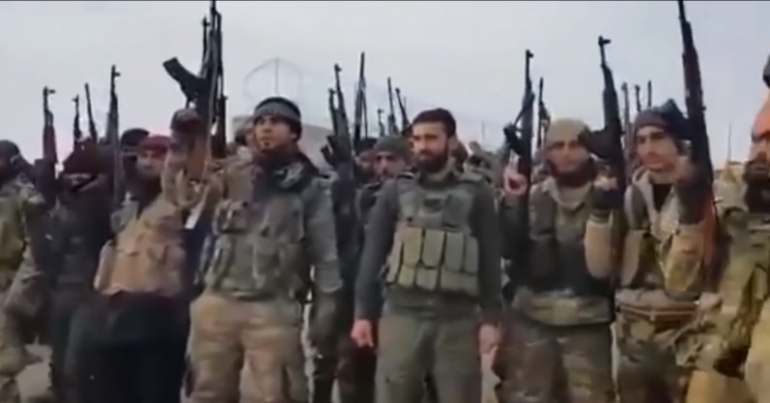 When UK prime minister Boris Johnson met with French president Emmanuel Macron in Paris he boasted how French railway lines are manufactured at the British Steel plant at Scunthorpe. But what Johnson neglected to add, is that the plant is seeking a rescue package and the main bidder is Ataer Holding, a subsidiary of Oyak, a pension company that funds Turkey’s military. Also – crucially – that the Turkish military has been arming jihadists, who have been fighting UK allies in their war against Daesh (Isis/Isil).

In January 2018, the Turkish army invaded the mainly Kurdish-populated province of Afrin (northern Syria). This led to extensive looting, “widespread human rights violations”, and alleged war crimes. In support of those military operations, the Turkish military and intelligence services have been arming jihadists. And it appears this has been going on for years.

For example, it was revealed that on 9 January 2014 Turkey bussed in hundreds of jihadis into Syria via the border town of Akçakale. The bus drivers claimed the operation was organised by Milli İstihbarat Teşkilatı, also known as the National Intelligence Organization (MIT).

And on 19 January 2014, MIT was caught red-handed “transporting missiles, mortars and anti-aircraft ammunition” via trucks to al-Qaeda in Syria. Cumhuriyet posted a video allegedly showing trucks inspected by security officers:

In 2018, the Permanent Peoples’ Tribunal ruled that the Turkish state and its president are guilty of war crimes against the Kurdish people in the southeast of Turkey (Bakur/northern Kurdistan).

Now, new evidence has emerged that appears to provide details of similar operations. There are claims that one clandestine operation involved six steel containers in three trucks that:

These arms were reportedly destined for Ansar al-Islam, which is an al-Qaeda affiliate group.

And in 2016, the autonomous Kurdish-majority communities in northern Syria published “compelling evidence” of collusion between Daesh militants and Turkey.

Indeed, Daesh has admitted its “full cooperation with the Turks”. And jihadis have reportedly been safe-housed in southern Turkey, where jihadist recruits are plentiful.

The ethnic cleansing of Kurds in Afrin by Turkish-backed jihadists is ongoing, with thousands of jihadist families transported there to take over the homes of Kurds displaced by the invasion:

Watch how terrorist families moved in after Turkey bombed their way clear , pushing Jihadii families from the south to move in.

Turkeys experiment was a success and now all of North Syria. The Kurdish regions are set to be depopulated to make way for Jihadist families. pic.twitter.com/5zwJaVHh5C

Afrin was home for thousands of displaced persons from Aleppo, Idlib and Homs. Gender equality was observed, with many senior positions held by women. Kurdish Alevis, Christians and Yazidis lived in harmony with Kurdish Muslims. There were also several Arab villages.

Now, we see women are removed from social and political life, forced to cover-up. ISIS-like groups are in control of the city, people are kidnapped and tortured for ransom, their properties stolen. This is horrifying.

Turkey’s wider aim is to annex Kurdish territory, 30-40km (20-25 miles) wide. The US is reportedly seeking a compromise by insisting that what Turkey calls a ‘safe zone’ is limited to 10km (six miles) wide. However, even if Turkish president Recep Tayyip Erdoğan accepts the US proposal, this will mean that the major Kurdish cities of Kobane, Quamislo, Serekaniye and Derik could be ethnically cleansed and come under Turkish control.

Since 2012, the Kurdish militias have been defending a secular, multi-ethnic, and feminist experiment in direct democracy in the Democratic Federation of Northern Syria (aka Rojava). At the forefront of this social revolution is the Movement for a Democratic Society (Tevgera Civaka Demokratîk or TEV-DEM). Its ‘democratic confederalism‘ (or grassroots, self-governing democracy) ideology contrasts sharply with that of its authoritarian neighbours, including Turkey.

The multi-ethnic SDF is the frontline force responsible for the defeat of Daesh. The largest component of the SDF is the Kurdish militias, the YPG and YPJ. Indeed. it was the YPG and YPJ  forces that defeated Daesh in its de facto Syrian capital of Raqqa.

It is no secret that since late 2014 the SDF has received strategic military support in their campaigns from both the US and the UK. Details of UK support were provided in a statement, dated 2 May 2017 and headed: The RAF are continuing to take the fight to Daesh in Iraq and Syria.

But, inevitably, the military support of the Kurdish-led militias is subject to the twists and turns of domestic politics elsewhere, including the UK.

In 2016, the Vote Leave campaign, fronted by Boris Johnson, included outrageous propaganda that wrongly claimed that Turkey was about to be admitted into the EU. And a Vote Leave social media ad showed ‘millions’ of Turks heading for the UK, via Europe:

No doubt Johnson may be keen to approve the bid for the British Steel plant. But will that approval take into account the ethnic cleansing of Kurds by Turkey? Probably not, for in post-Brexit UK, ethical investment is unlikely to be of consideration.

And, yes, the Scunthorpe steel plant badly needs investment, but not from a company that also financially supports a military that is complicit in war crimes.