Activist Sarah Hegazi took a stand for LGBTQI+ rights and paid the ultimate price. We must honour that. - Canary 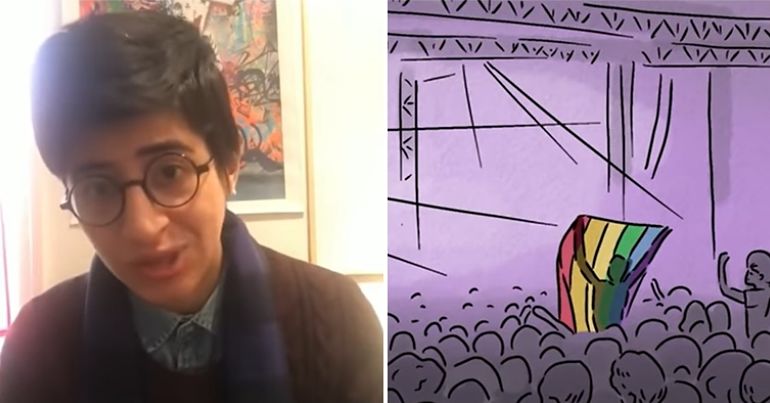 On 14 June, communist, feminist, and LGBTQI+ activist Sarah Hegazi died in Canada after taking her own life. She was just 30 years of age. An “act of support and solidarity” by her and fellow activists at a concert in Cairo in 2017 ultimately landed her in prison. Yet despite the ending of that short life, her iconic act lives on.

Possibly the best way to remember and honour the life of someone so brave is to keep them alive in our thoughts and actions. And to remember that she stood with pride.

Hegazi was arrested one week after holding aloft a rainbow flag at a Mashrou’ Leila concert in Cairo in October 2017. Mashrou’ Leila is a Lebanese indie rock group and it has since been banned from Egypt. The lead singer Hamed Sinno is openly gay and the group has spoken out on LGBTQI+ issues. Following that concert, Egyptian authorities began the ‘worst ever crackdown on Egypt’s gay community’.

Along with Hegazi, several others were arrested and imprisoned following an investigation into the rainbow flags at the concert. But it was Hegazi and law student Ahmed Alaa who faced the most serious charges. They were both charged with “joining an illegal group and promoting its ideas”. And the authorities also charged Hegazi with “promoting sexual deviancy and debauchery”.

After her arrest, security officers blindfolded her and took her to a detention centre. They stuffed cloth into her mouth and tortured her with electric shocks. She claims officers encouraged other women in the prison to molest her. She also claims one of the interrogators wanted her to prove homosexuality wasn’t a disease and even “likened Communism to homosexuality”. On another occasion, according to Hegazi, “he sarcastically asked why homosexuals don’t sleep with children or animals”.

Then, after spending three months in prison, she was released on bail. But as she feared the authorities would arrest her again, she moved to Canada. She got political asylum there.

Hegazi explained in an interview with NPR why she flew the flag:

It was an act of support and solidarity — not only with the [Mashrou’ Leila] vocalist but for everyone who is oppressed,

We were proud to hold the flag. We wouldn’t have imagined the reaction of society and the Egyptian state. For them, I was a criminal — someone who was seeking to destroy the moral structure of society.

Following her release on bail she spoke about her ordeal. She said she was electrocuted and suffered psychological torture while in prison. She was later diagnosed with post-traumatic stress disorder (PTSD). Hegazi wrote:

I suffered from severe depression, PTSD, tension, anxiety and panic attacks, with electroconvulsive therapy (ECT) that led to memory problems, before I was forced to travel for fear of arrest again,

In exile, I lost my mom, then I had another ECT treatment in Toronto, two suicide attempts, stuttering, panic, fear, and attempts to avoid talking about imprisonment, the inability to walk out of the room, along with a greater deterioration in memory.

Homosexuality is legal in Egypt, but people are repressed based on their sexual orientation. And same sex conduct can result in imprisonment where people are arrested under Egypt’s “debauchery” law. This repression has even been extended to arresting journalists who have simply interviewed a gay person.

In January 2019, TV host Mohamed Al-Ghaity received a one-year sentence for interviewing a gay man. But Al-Ghaity is anything but a LGBTQI+ activist. He’s a supporter of Egypt’s government and has made anti-gay comments in the past.

When people learned of her tragic death, tributes poured in as people remembered her in their own way. The hashtag #RaiseTheFlagForSarah started trending on social media:

Her name was #SarahHegazi. She was assaulted & imprisoned in #Egypt for raising the #prideflag at a concert. She recently committed suicide.

We #RaiseTheFlagForSarah 🏳️‍🌈 to send a clear message: Violence against #LGBTQ & women will no longer be worn as a badge of honor in Egypt. pic.twitter.com/vdIhzWU3Fy

Yesterday, Egyptian #LGBTQ activist Sarah Hegazi died by suicide in Canada where she lived in exile. She was imprisoned and tortured for months in Egypt after flying a rainbow flag at a 2017 @mashrou3leila concert in Cairo.

The world is so cruel! I’m sorry to every single person whose spirit the world crushed just cz they dared to b unapologetically thmslvs&make this world a better place! Just cz they want to spread love&b loved! Look at tht smile! My heart is broken. RIP angel #RaiseTheFlagForSarah pic.twitter.com/2DsNOMsEcN

"To the world – you were cruel to a great extent, but I forgive." – #SaraHagazy, 30, tortured by Egyptian authorities for standing up for equality & freedom, a prominent LGBTQ+ activist who was forced to take up asylum in Canada. Let's #RaiseTheFlagForSarah

Her stature and warm, gentle smile does not represent the true picture of someone you’d typically call a warrior. But that’s what she was. A warrior with a gentle smile. She stood up when it was neither safe nor popular to do so and tragically she paid the ultimate price.

And because of what she did, she’s left a positive impression on many across the world. We must never forget and always honour her memory, as well as the countless others who stand fearlessly for LGBTQI+ rights. We can do this by standing up for human rights and standing firm against injustice.

If you need to talk to someone, call the Samaritans on 116 123 or email [email protected].